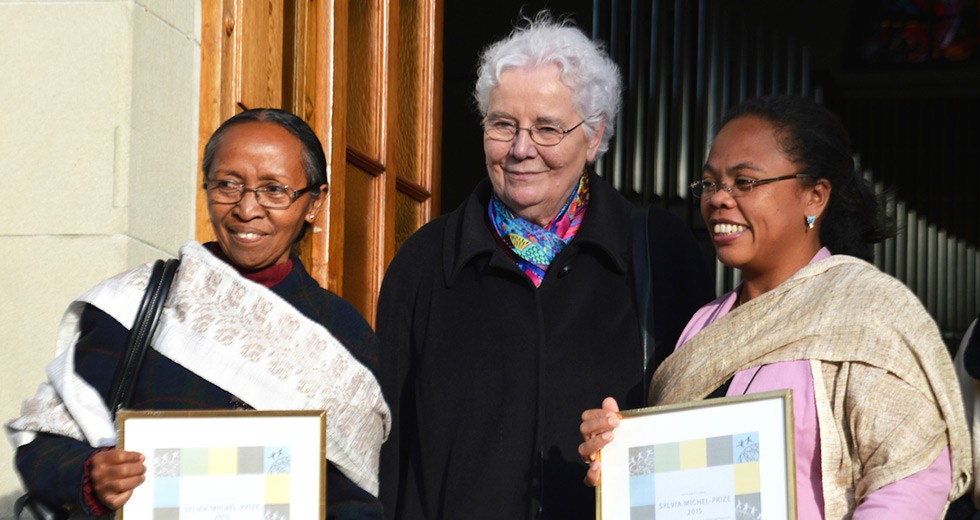 Two women from two generations have been recognized for their work both as leaders and for developing leaders in their church.

Yvette Rabemila and Brigitte Rabarijaona, both ordained ministers in the Church of Jesus Christ in Madagascar, were awarded the 2014 Sylvia Michel Prize at a worship service in Heiden, Switzerland, on Sunday, 8 March 2015.

The recognition comes with 5000 Swiss francs, which will be used to fund their “Empowering Women Ministers” project. The prize is given every two years by the current presidents of the Federation of Swiss Protestant Churches, in collaboration with the World Communion of the Reformed Churches (WCRC).

“Women should be better equipped to fulfill their responsibilities as ministers and to show that they can do as good as the men, if not better,” said Rabemila. “And we really would like more women ministers in the hierarchy of the church. At the local level they are well accepted, but at the higher level of the church, there are fewer women.”

Around a quarter of the ministers in the Church of Jesus Christ in Madagascar are women, but that figure drops to less than 5% on the church’s governing council. 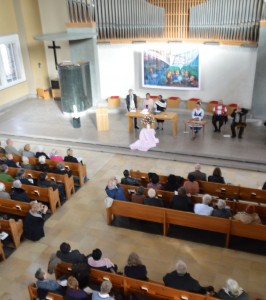 “Our aim in this project is to help women to be strong and equipped enough to first accept leadership positions and then brave enough to face men’s way of marginalizing you in every manner,” said Rabarijaona. “Women have been trained in theology and how to work in church but not in the area of higher church governing.”

The project will provide a series of training seminars for women throughout the church’s 37 regions and will focus on three themes: leadership, theological reflection and self-esteem.

Rabemila, who retired a decade ago, has long been a leader for her church, serving eight years as its first female vice president and as a professor in the theological college, teaching both New Testament and missiology. She has also served as a local church pastor and in international ecumenical organizations.

She cited her time as vice president of the Church of Jesus Christ in Madagascar as a highlight in her career. “I was able to see the church as a whole, locally, but also the place of the church within the world,” Rabemila said. “During that time I really felt that I was doing something good. I was sort of accepted by everybody. There was no discrimination whatever.”

Rabarijaona, meanwhile, is at the start of her career. She has already served in a congregation, where she encountered some resistance, due to both her gender and age. “My struggle at this time was to show them that I may have the appearance of a baby, but I am someone and can do my job and lead them,” she said. She also encountered discrimination when she pursued her academic studies at a seminary in Cameroon “because not all the churches ordain women.”

She is currently teaching at the theological college and is the head of the Bible Society’s translation department. “When I came back [from my studies] I saw these conditions of how women are treated. So with Yvette I talked about how to help. Not all women have the same chances I have had,” said Rabarijaona. 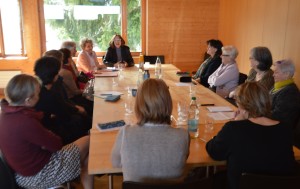 “The purpose of the Sylvia Michel award is to honour people and projects devoted to the promotion of women as church leaders,” said Regula Wegmann, vice president of the Council of the National Reformed Church of the Canton of Aargau. “As half of the Swiss churches are being or have been led by women, they would like to pass on this significant concern to the member churches of the World Communion of Reformed churches, and they would like to encourage the promotion of women to leading positions in the churches.”

“As a worldwide organization we are engaged to empower women from around the world,” said Dora Arce-Valentin, the WCRC’s executive secretary for justice. “For us this issue of empowering women is a matter of justice, and we are a communion committed to justice.”

“I would say that women shouldn’t hesitate if they feel the call to be ministers because in many parts of the world, including Madagascar, women have been playing an important role in the church,” said Rabemila.

In recognition of Sylvia Michel as a pioneer church leader and in celebration of the skill with which so many women in the world support, sustain and sometimes lead their churches, the Sylvia Michel Prize is given to women who encourage and promote women to assume leadership positions in their churches. Michel was Europe’s first female church council president when she was elected to head the Church of the Canton of Aargau in 1980.