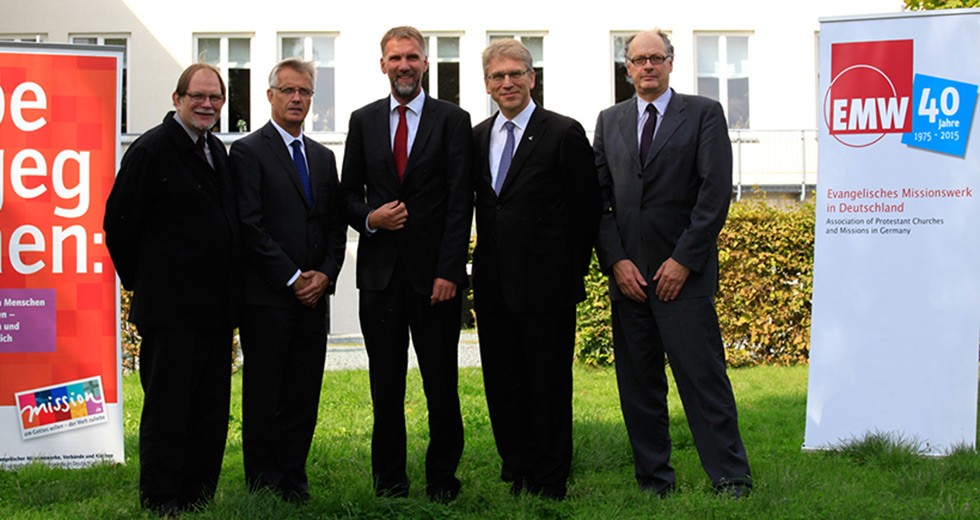 We’re pleased to share this press release from our sisters and brothers in the EMW (Evangelisches Missionswerk in Deutschland):

Truly thankful for the attendance of Olav Fykse Tveit (WCC), Martin Junge (LWF) and Chris Ferguson (WCRC) at the General Assembly of EMW (Association of Protestant Churches and Missions in Germany), its director, Pastor Christoph Aanders, praised the long standing relations to those church bodies: “Over four decades the mutual interinstitutional cooperation has prospered.” The General Secretaries thanked EMW’s efforts in supporting ecumenical theological education and formation world wide as a major contribution to the ecumenical movement.

Bishop Jan Janssen, Chair Person of the Board of EMW, honoured the three keynotes given and – half jokingly – compared the joint visit with that of the proverbial Three Wise Men: “Considering the tasks ahead we value the contribution, sharing of insights and commenting on programmes and projects, of the esteemed guests as much as the gifts of the Wise Men were appreciated.”

During the General Assembly at Herrnhut – home of the Moravian Church (Herrnhuter Bruederge-meine) that hosted the Meeting as one of EMW’s members – one of the many topics was a short retrospect into EMW’s history.

As a new Board was elected in accordance with the Statues the re-elected Chair Person, Bishop Janssen, stressed several issues as very pressing, such as the changing landscapes of Christianity and the situation of partner churches and other organisations in the global south.

Furthermore the situation of refugees was addressed. “Unfortunately this is not a new topic for the Churches,” Olav Fykse Tveit said. He and his colleagues of the world federations pointed out the importance of matters regarding displacement and flight for Churches and Christians world wide. They encouraged the Churches and Mission Societies in Germany to support all refugees equally.