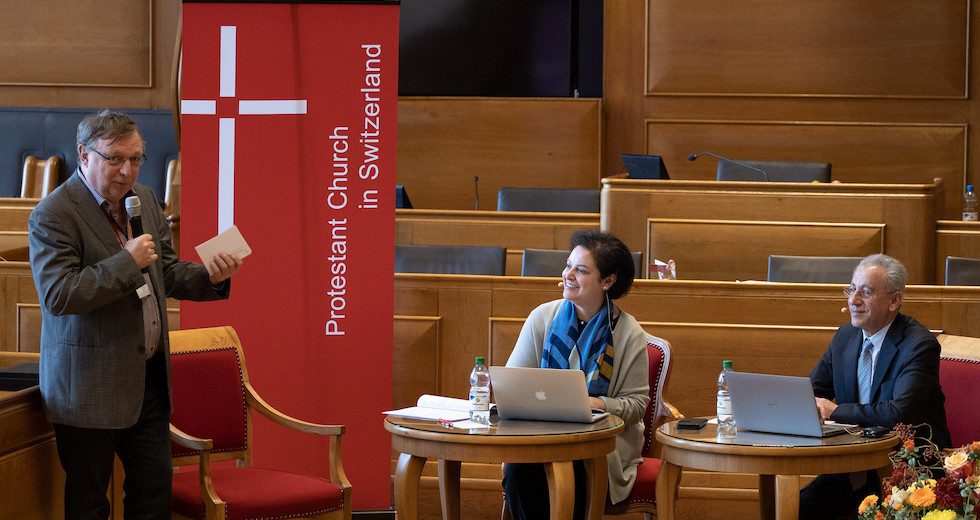 The Palestinian-Latin American Dialogue on “Christian Zionism and Religious, Political, and Economic Fundamentalisms” concluded last Friday, November 11, in the city of Santiago, Chile. Among its participants was Guatemalan pastor and defender of women’s rights Delia Leal, who spoke about the event, pointing out that “it has become necessary to deepen our understanding of the fundamentalisms that prevail today, which must be reread as a problem of a social nature that affects freedom and limits the emancipation of our peoples.”

Makoto Fujimura will be the recipient of the 2023 Kuyper Prize from Calvin University and Calvin Theological Seminary. Fujimura will become the first visual artist to receive the prize, which has been awarded annually since 1998.

An historic declaration of friendship between the Church of Scotland and the Catholic Church in Scotland was signed at Dunfermline Abbey. The St. Margaret Declaration was formally endorsed on what is St. Margaret’s Day during a special service to celebrate the 950th anniversary of the magnificent building.

Christian Brooks, from the Presbyterian Church (USA), reflects on her work at COP27, and how faith informs her sense of unified advocacy for the climate.

Uniting Church in Australia President Sharon Hollis met with church partners from across Southeast Asia recently. While she was there, she got to see the fruits of UnitingWorld’s work in partnership with local churches, including the Gereja Kristen Protestan di Bali (GKPB, the Protestant Christian Church in Bali).

What does it look like to “prepare the way for the Lord” in the midst of injustice, conflict, and a creation that groans? Join World Renew, Resonate, and Christian Reformed Church in North America Social Justice for Advent devotions on this theme, sent to your inbox every Monday, Wednesday and Friday during Advent.

The Jesse Tree Story could come in handy for Advent children’s messages, or you might want to recommend it to families in your church. This family Advent devotional brings 25 Bible stories about the ancestors of Jesus to life for kids and families. Each devotion tells the story of someone on Jesus’s family tree and corresponds to a symbol that your family can make and hang on your own Jesse Tree. Devotions are posted online and are available in a new illustrated book.

An ecumenical group of committed Christians has launched a dialogue on the separation of religion and state in the Middle East, placing their hopes in youth and civil society. The Protestant Church of Switzerland invited the Najla Kassab (Reformed) and Michel Nseir (Orthodox) to talk about their project.

The Evangelical Mission in Solidarity has started an international Bible reading and reflection project focused on the theme “Integrity of Creation.”

The Middle East Council of Churches, in cooperation with the Kerk in Actie organization in the Netherlands, launched the “Restoration Fund for Rehabilitation of Faith-based Social Services & Religious Infrastructure Damaged During the Crisis in Syria” in 2020. The Dutch recently took a look at the impact of the partnership.

COP side event explores how to deliver on the promise of adaptation: The World Council of Churches and its partners hosted a side event during COP27 that explored “Delivering the promise: How to ensure present and future adaptation needs are addressed.”