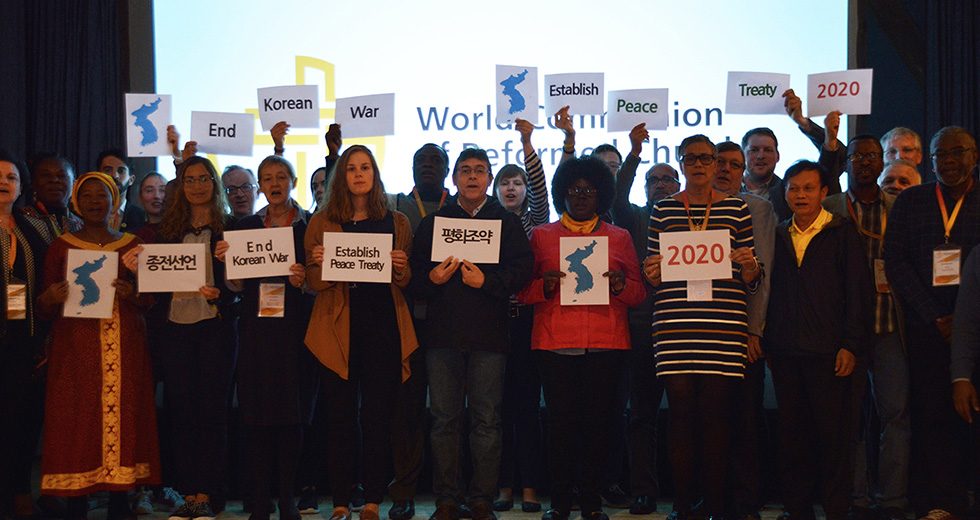 At a Peace Convocation on 20 June, people holding blue umbrellas as a symbol of unity prayed, walked and called for peace together. The convocation, coordinated by the Presbyterian Church in the Republic of Korea, commemorated 70 years since the start of the Korean War. Held at the White Horse Hill Memorial in Cholwon, the observance took place on one of the most ferocious battlefields of the Korean War.

Kurt Esslinger, of the Presbyterian Church (USA) works with the Reconciliation and Unification Department of the National Council of Churches in Korea. He reflects on Global solidarity to end the Korean War: ‘70 years is quite long enough.’

The Reformed Church in Hungary has been journeying with the Korean Presbyterian community for reconciliation, peace and reunification for decades, in close cooperation and partnership especially with PCK and PROK. They commemorate the painful division of the Korean people and commit themselves to continuing joint efforts for peace. As sign of their ongoing sympathy, they published the message of solidarity.

The Uniting Church in Australia has joined global churches and ecumenical bodies calling for immediate steps to formalising peace on the Korean Peninsula.

This video based on the story of Moon IkWhan, who was an inspirational prophet, a Hebrew Scripture scholar, and an ordained minister of the PROK, is timely in terms of marking the 20th anniversary of the June 15th Joint-Declaration between North and South Korea for one Korea.

Churches throughout the world are calling for a peace treaty to formally end the Korean War that started 70 years ago.

The United Church of Christ is among nine North American Christian denominations and four national and worldwide ecumenical bodies urging their members to press the United Nations for a formal inquiry into “deadly acts of racism” against black people around the world.

Each week since the start of the lockdown, the Church of Scotland has joined with other denominations and organisations across the country to publish a call to prayer in response to the COVID-19 pandemic. Their Gaelic translation has even reached as far as Australia and Canada, as well as Harris and Skye.

Petrus, the magazine of the Protestant Church in the Netherlands, presents a video of Swing Low Sweet Chariot.

Religious intolerance is on the rise. Christians, Jews, Muslims, and religious minorities in Europe and beyond experience more discrimination, hatred, even persecution. Hate speech is increasingly widespread. To explore these issues, Council of European Churches released a video, featuring impressions from participants of its 6th Summer School on Human Rights.