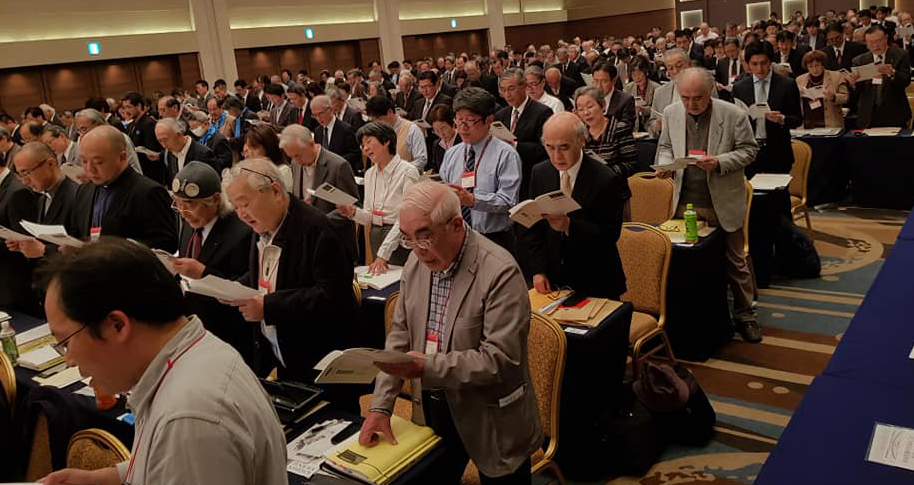 Two member churches of the Christian Conference of Asia, the United Church of Christ in Japan (Nihon Kirisuto Kyodan) – [UCCJ] and the Christian Evangelical Church in Minahasa (Gereja Masehi Injili di Minahasa) – [GMIM] entered into an historic mission agreement during the 41st General Assembly of the UCCJ held at the Metropolitan hotel in Tokyo, Japan from 23 to 26 October 2018. Read More

The final declaration of the Conference on Asylum organized by German Diaconia and the Church Commission for Migrants in Europe asked for an end to the hotspot approach and claim the creation of a common European asylum system and the establishment of safe passages. Fiona Kendall and Alberto Mallardo from the MH Mediterranean Hope by the FCEI, also participated. On 20 October conference ended with a Joint declaration the European Conference about Asylum “Solidarity first – Reclaiming the values and principles of Europe” organised by the German Diaconia (Diakonie Deutschland) and the Commission of Churches for Migrants in Europe (CCME).Read More

In the news of late, much is being reported about the asylum seeker caravan heading north through Mexico to the border of the United States. As Conference Minister of the Southwest Conference UCC, I can say what you hear in the news is often different than what we see and experience here in our Conference’s borderlands.  I returned from border visits in Nogales and Juarez, Mexico, last week. The week before I visited with our churches sheltering asylum seekers recently released from detention in Arizona. Border community residents and our ministry partners reported, and I witnessed, an increased military presence on both sides of our southern border. Read more

Twenty one young people suing the federal government to secure a legal right to a stable climate for future generations are still waiting for their day in court. The Supreme Court’s temporary stay, issued October 21, has yet to be lifted, keeping Juliana v. The United States from beginning as scheduled in Eugene, Ore., Monday, October 29. Instead, youth around the country, at scores of Federal Courthouses across the U.S., raised their voices in local rallies, demanding the young plaintiffs get their right to be heard. Read More

More than 220 church leaders representing over 20 churches from Belgium, France, Luxembourg and Switzerland are meeting from 27-31 October in the French city of Lyon for the first Francophone Christian Forum. The meeting is a regional expression of the Global Christian Forum (GCF), which seeks to bring Christians together from as wide a spectrum of churches as possible. Read More

The Samoan National Conference (SNC) Leadership Weekend took place on 19-20 October at Lidcombe Samoan Uniting Church in Sydney. About 50 Samoan Uniting Church leaders came together from different parts of the country to be enriched by the unity of their faith, to share in the joys and challenges of ministry and to explore how they can better serve their community. Read More

A ceremony to commemorate 100 years of the Evangelical Church of Czech Brethren will be held from 14  to 16 December in Prague. The event will feature special prayers, lectures, music and visit. CEC Study Secretary Rev. Dr Peter Pavlovic will bring greetings on behalf of CEC. Read more

CEC in collaboration with Cumberland Lodge will hold an ecumenical conference on human rights addressing the theme “Towards Peaceful Coexistence in the Middle East: Challenges and Opportunities”. This event will take place from 14 to 16 December 2018 at Cumberland Lodge, United Kingdom.