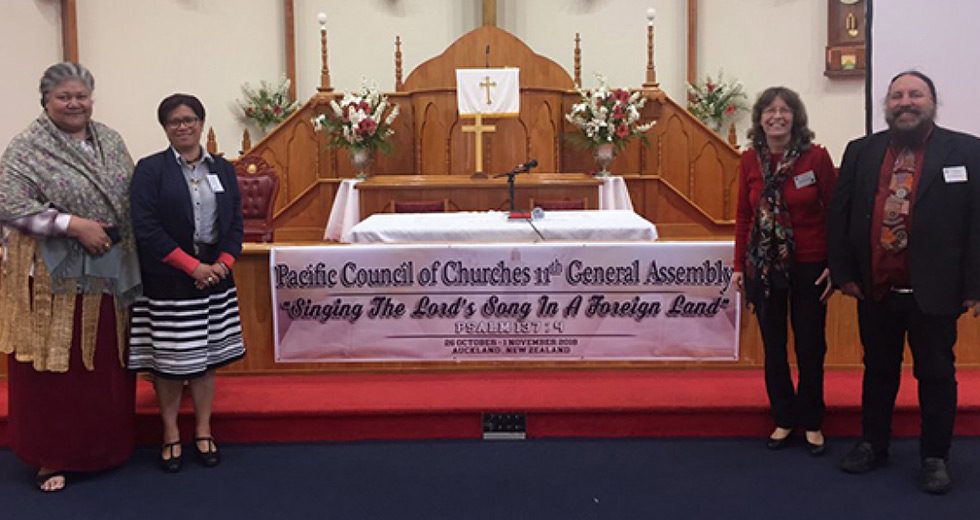 Church leaders from the Pacific region have explored themes of displacement and captivity at the 11th General Assembly of the Pacific Conference of Churches (PCC).Over seven days from 26 October to 1 November representatives of the PCC’s 34 member churches and 11 national councils of churches shared worship and built ecumenical community at the Free Wesleyan Church of Tonga in the Auckland suburb of Mangere. Read More

In its continuing efforts to outlaw nuclear weapons, the World Council of Churches (WCC) has issued public support for French Polynesia’s petition to the UN for redress for ongoing effects of nuclear testing there. Read More

Because they’ve earned the trust of the communities they serve, ACT Alliance and other faith-based organizations are starting to be heard by the world. Dan Benson shares his experience as a United Church representative to the ACT Alliance General Assembly in Uppsala, Sweden. Read here

Set in the backdrop of a historic thaw of tensions between North and South Korea, the 2018 Presbyterian Peacemaking Travel Study Seminar begins today in Seoul, as eight participants tour important sites and meet with Presbyterian Church (U.S.A.) partners engaged in the peace process. Read More

The biblical account of a Jew living in exile whom God placed in a Persian palace, her cousin Mordecai and the murderous Haman, who sought to exterminate Jews, has echoes today, author and scholar Dr. Sherron K. George told a gathering at the Presbyterian Center Wednesday. Read More

The Christian Conference of Asia (CCA) lauded Pakistan’s Supreme Court for the acquittal of Asia Bibi, an illiterate, Christian mother who has been spending nine years behind bars as she was convicted and sentenced to death in 2010  on charges of committing blasphemy.  Blasphemy is an incendiary charge in a Muslim majority Pakistan, where even unproven allegations of insulting Islam can provoke a violent and bloody death at the hands of extremist Islamists. Read More