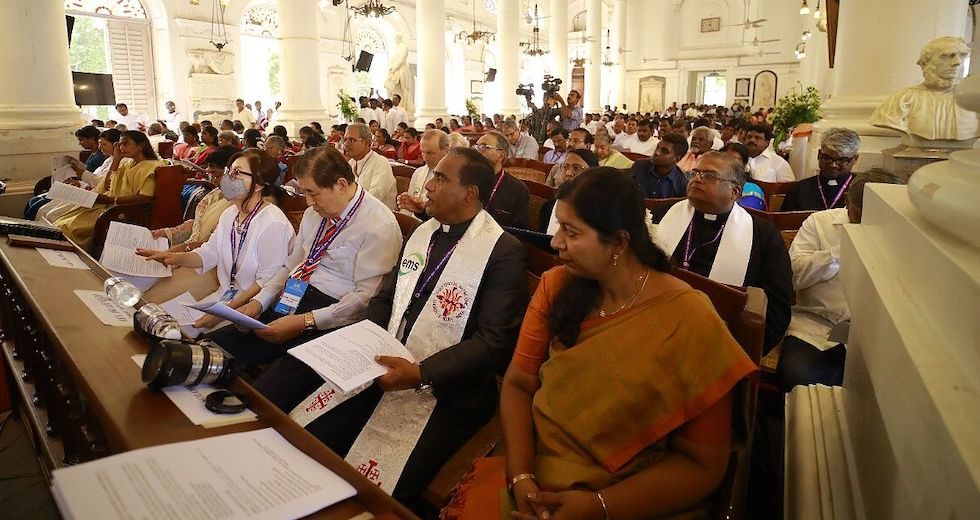 With more than 10,000 in attendance, the Church of South India celebrated the 75th anniversary of its founding this week. Only a few weeks after the end of colonial rule, the church was founded as a “united and uniting church”—an expression of the dawn of a new era. Today the Church of South India has more than 4.5 million members. Two thirds of them are Dalits, so-called “untouchables” or “casteless”.

Fifty years ago on 5 October 1972, the Annual Assembly of the Congregational Church in England and Wales and the General Assembly of the Presbyterian Church met for the final times, together, in Methodist Central Hall Westminster, where they dissolved themselves and formed the United Reformed Church.

Church leaders in the Philippines gathered in an ecumenical memorial service in Manila on 21 September, the 50th anniversary of the imposition of martial law, to solemnly recall people of faith who were tortured and killed during the brutal regime of president Ferdinand Marcos.

The Synod of the Evangelical Church of the Rio de la Plata is taking place from 6 to 9 October in in Eldorado, Misiones, Argentina.

“Reformed people are the coolest”: Bernd Becker has been in the office of moderator of the Reformed Federation for about five months. In a conversation with us, he summarizes the time – and thinks about what reformed identity means to him: “It matters less the form, more the content.”

On Thursday, 13 October, people of faith across Australia and the Pacific will jointly call for actions to protect creation ahead of global climate talks at COP27 in November.

Mark Pettis, who began work in 2021 as the United Church of Christ’s ecumenical and interfaith relations manager, is just back from a busy September in Germany. He reflects on the value of the UCC’s long and close relationships with partners there—and on hearing their perspectives in this time of war in Europe.

The Rise of a Lonely World: So how can Reformed Christians respond to this “new normal”?

The Council for World Mission’s September issue of Insight arrives during a time when vestiges of the pandemic remain in a world that is slowly reopening and adjusting to a new normal. It carries Karen Georgia Thompson’s reflection on how post-pandemic mission should be done together as a Church rather than ‘to’ or ‘from’ the margins; Jackline Mutuma’s voice on the impact of the pandemic on youth and the church in Kenya; and more.

Future perspectives and change: Delegates from member organizations and churches met for the annual general meeting of Evangelische Mission Weltweit e.V. (EMW) from October 4 to 6 in Hamburg.

A youth congress organized by the All Africa Conference of Churches on 31 October-5 November at the Pentecost Convention Center in Ghana will draw about 2,000 young people between the ages of 15-35. With the theme “Africa: My Home. My Future,” the congress will endeavor to increase awareness of the tremendous potentials of young people—and the opportunities that await.

In New York City, the spirit of Thursdays in Black is thriving.