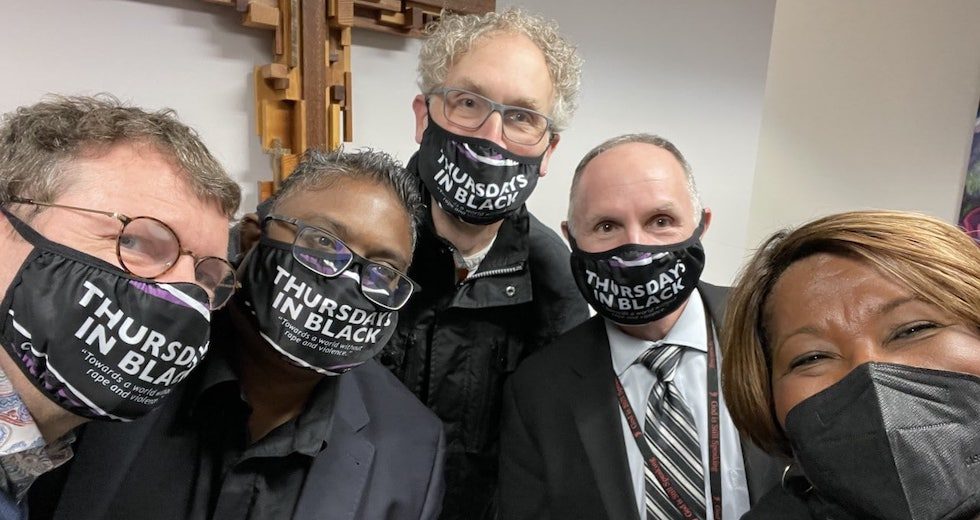 United Church of Christ Church (UCC) House hosted its last ecumenical visit as national ministries welcomed Reformed partners: The national ministries, preparing to move early next year, marked another milestone, hosting their last delegation of ecumenical partners in November. UCC team leaders welcomed three representatives of the World Communion of Reformed Churches to 700 Prospect (Cleveland, Ohio) for a long-anticipated meeting in the United States, one that had been postponed earlier due to the COVID-19 pandemic.

Kiribati Uniting Church celebrated its 164th anniversary at a church service at Tangintebu Theological College. During this anniversary celebration, The Pacific Conferences of Churches General Secretary James Bhagwan acknowledged the role of the Kiribati churches in speaking strongly to the world on issues of climate change.

Syria and Lebanon must not be forgotten! Rita Famos, president of the Protestant Church in Switzerland, and Daniel Reuter, vice-president and member of the Board of Trustees of the Swiss Protestant Churches’ Aid Organization (HEKS), welcomed Haroutune Selimian from Aleppo (Syria) and Riad Jarjour from Beirut (Lebanon) in Bern on December 3rd.

Paolo Naso, a political science professor and coordinator of the Mediterranean Hope Project of the Federation of Evangelical Churches in Italy, considers ways in which to defend the democracies of freedom from both theocratic dictatorships and the illiberal democracies that are also consolidating in Europe.

The Uniting Church in Australia was deeply saddened to hear of the recent passing of Salim Sahyouni, former president of the National Evangelical Synod of Syria and Lebanon.

On 15 December Rachael Denhollander will accept the 2021 Abraham Kuyper Prize for Excellence in Reformed Theology and Public Life. Denhollander is an attorney, author, advocate, and educator who is recognized as a leading voice on the topic of sexual abuse.

On his first visit to Lebanon after his inauguration as archbishop of the Anglican Church in Jerusalem, Hossam Naoum and the accompanying delegation visited the Supreme Synod of the Evangelical community in Syria and Lebanon, where he was received by the president of the Supreme Synod, Reverend Joseph Katsav.

Antiracism “is the core work of the church”—More than a year after the death of George Floyd, the Rev. Anna Kendig Flores believes it’s still of utmost importance for churches to continue doing antiracism work.

The Council for World Mission has released Doing Theology in the New Normal: Global Perspectives, which revisits four old responses to crises—assure, protest, trick, amend—to explore if/how those might still be relevant and effective and/or how they might be mutated during and after a global pandemic.

Elia Nasrallah, of the Middle East Council of Churches, asks (and answers): Why did Jesus choose Bethlehem as birthplace?