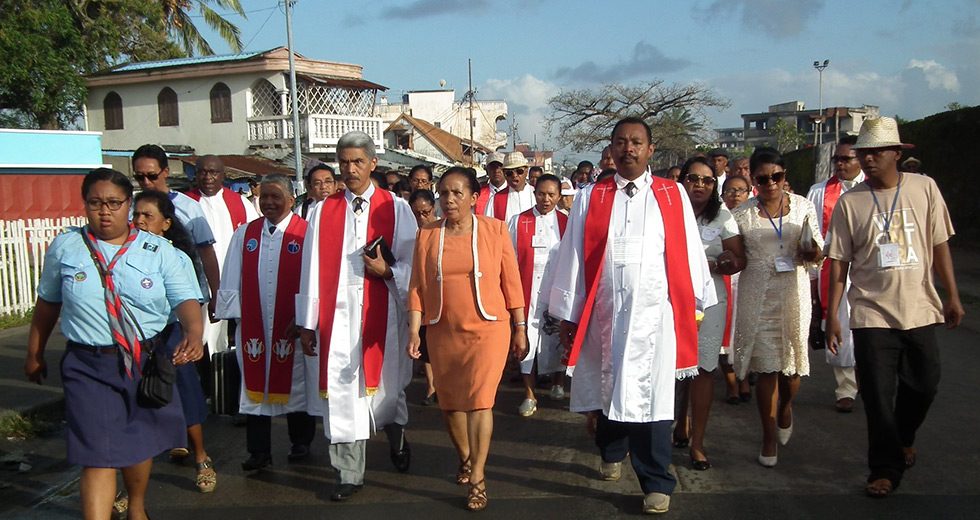 The Synodal Council of the Evangelical Church of Czech Brethren has issued a statement encouraging the Czech government to help refugees. The statement expresses concern over Czech government’s decision that it will not accept any refugees from a group of people caught in a fishing boat near the Italian shores.

The Evangelical Waldensian Church Synod passed a Manifesto on Welcoming that calls for a “language that respects dignity and a stand against xenophobia and racism and denounces the exasperation of the public debate on the issue of migration”.

The Church of Jesus Christ in Madagascar celebrated its 50th anniversary on 18-19 August with events that included a special thanksgiving worship service in Toamasina.

The medical team of the Hungarian Reformed Church Aid served Rohingyas refugees in Bangladesh for twelve days, and now just returned to share their experiences. “During our two-week mission as the HRCA medical team, we did the best we could with our abilities and the opportunities we were given,” said Márton Juhász, director of the team.

Pastor Caleb Dickson was ordained as a commissioned pastor in March, making him among the first Native American people to serve in this role in Classis Red Mesa (Christian Reformed Church in North America). Among other things, his ministry exemplifies the growth, focus, and significance of the Red Mesa Leadership Training Network that he studied with and that has been raising up Indigenous leaders and pastors for the past 10 years.

The Moderator of the General Assembly of the Church of Scotland joined Christian Aid staff and supporters at their “power walk” on Saturday. The annual walk around Whitelee Windfarm in East Renfrewshire, the UK’s largest onshore windfarm, is both a fundraiser and raises awareness of Christian Aid Scotland’s campaign for Scotland to transition to a zero-emission economy.

More than 100 people from seven Conferences in the United Church of Christ, joined by members of three ecumenical partner Churches, are converging on the border town of Sahuarita, Arizona, for several days of study and service around immigrant justice.

As Kerala, the southern state of India, nicknamed “God’s Own Country,” battles one of the worst flood disasters in a century, various religious communities have opened their doors to help homeless people.

In recent years, a number of mainline, North American, Protestant Christian denominations have passed resolutions repudiating the Doctrine of Discovery. Now they’re considering how to act on those denunciations.

“The legacy and contribution of the Serampore College and the Senate of Serampore (University) over the past two centuries in nurturing theological education and ecumenical formation are unparalleled in Asia,” stated the General Secretary of the Christian Conference of Asia Dr. Mathews George Chunakara.

While many voices vied for the attention of Kofi Annan, the former UN secretary general consistently listened to people seeking peace from the vantage point of faith, according to a Presbyterian mission leader.