The emergence of hope 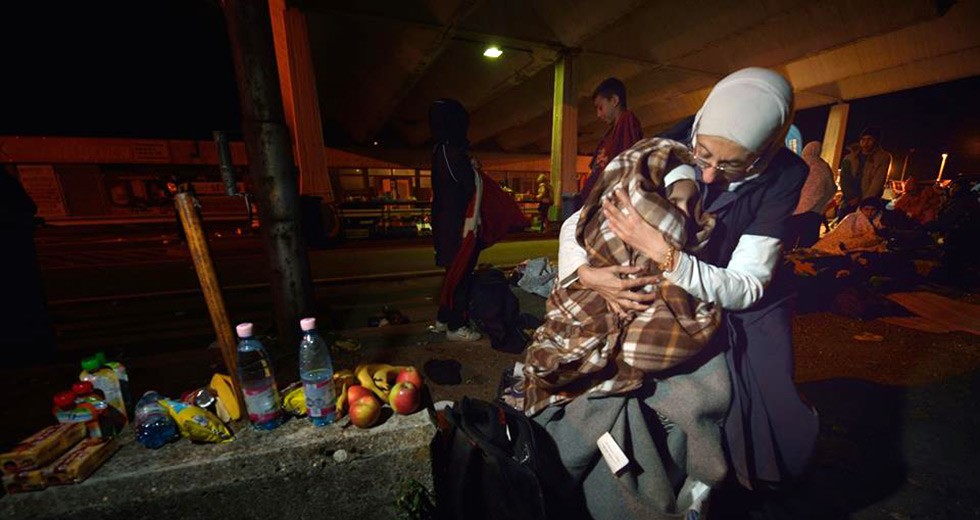 See, the home of God is among mortals. God will dwell with them, they will be his peoples, and God will be with them; God will wipe every tear from their eyes. Death will be no more; mourning and crying and pain will be no more, for the first things have passed away… See, I am making all things new. (Rev. 21:3-5)

The world is facing the largest refugee crisis in recorded history. The sheer immensity of the movement of people fleeing desperate situations of war, violence, persecution, disasters and economic oppression is only matched by the escalation of the conflicts, climate catastrophes and economic injustices themselves.

It is easy to feel overwhelmed by the enormity of the death, destruction and suffering and the poverty of the response of governments and world institutions. I attended the meeting of the Synod of the Waldensian-Methodist Church in Italy this summer, and when they announced there would be an information session about the refugee crisis I was prepared to feel overwhelmed—overwhelmed by numbers, the pain, the humanitarian need, the complexity of the causes, the lack of political will of those in power to address the root causes.

And sitting in that church hearing about the “Mediterranean Hope” initiative I was overwhelmed—but by the sheer power of love, compassion, action and prophetic anger of a small church that saw God among the people flooding to the small Italian island in the sea. They not only welcomed, embraced, fed, clothed and comforted those who arrived but lobbied, advocated and pressured so that the governments went into the sea and rescued those in peril. And not only that, this church is now insisting on safe passage: a humanitarian corridor so the refugees don’t fall prey to the human traffickers and risk death at sea. And not only that, this church insists in partnering with the churches in Africa and the Middle East to address root causes of the war violence and economic oppression that drive refugees from their lands and families.

And this small church—recalling their own past of suffering and displacement and rooted in their understanding of Reformed tradition—works with other sectors of the society not only to serve but to transform. Thinking way outside of the box. Called to do a new thing…

Faced with the avalanche of human suffering and injustice I was unexpectedly overwhelmed by HOPE, that the words in Revelation 21 were alive. God was dwelling among the people, and the covenant of justice and peace was pushing against exploitation, indifference, xenophobia, fear and death. I had expected to see crushing statistics and a grim scenario, but I also saw God doing a new thing.

And it wasn’t the first time this summer. In Lebanon seeing our member churches respond not just with compassion but in a transformative way to receive an influx of almost two million Syrian refugees in their small country and to live out the dwelling of God among the people…looking not only to serve but to transform.

This is not the stuff of Hollywood endings; this dwelling of God among the suffering people does not mean a happy ending. It means a compelling hope that situations created by human beings can be changed with and through God.

This overwhelming feeling of hope came to be this summer from another unexpected source, a book by Canadian writer Naomi Klein, This Changes Everything. Klein writes about the link between climate change and capitalism, a connection we know well in the WCRC as expressed in the Accra Confession. She demonstrates clearly her claim that the problem is “not carbon but capitalism.” That is not the unexpected part. The great surprise is that the book burst forth with hope. A secular journalist has capturedthe dynamic of God’s transformative dwelling among us and doing a new thing. Klein writes, “Climate Change is just a disaster but our best chance to demand and build a better world. We can’t change the laws of nature, but we can change our broken economic system.”

“See, I am making all things new”…and we can see…we see the emergence of hope as churches and other social actors look beyond the way things are and grasp that God is dwelling among us, and therefore through God with us things can and must be changed.

The above meditation was taken from the September 2015 edition of Reformed Communiqué, the WCRC’s thrice yearly newsletter.

Image above: On a bitter cold night along the Hungary-Austria border, here’s a Syrian refugee mother comforting one of her four children with whom she’s traveling toward Germany. They received food and warm blankets from the ACT Alliance. Photograph by Paul Jeffrey.