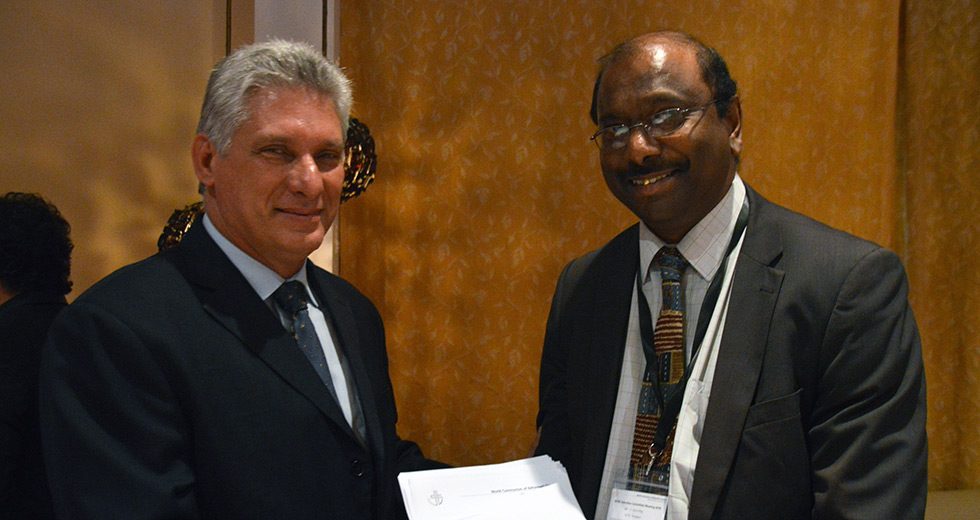 The WCRC’s 2016 Executive Committee meeting ended today, 13 May, with a flurry of activity focused on its host nation, Cuba.

These activities included crafting a “Statement from Cuba,” a visit and interaction with Vice President Miguel Diaz-Canel and a presentation from the FARC delegation currently in peace negotiations with the Colombian government in Havana.

The “Statement from Cuba” summarized the learnings of the executive committee about the context of Cuban and Latin American churches and included a call to Communion members.

The statement noted that struggles for justice, human rights and overcoming poverty continue throughout the region, “so we pray that democracy be respected, as it nutures peace as a fruit of justice.”

In pledging continuing “solidary and support to the Cuban church” the statement called on the Communion to:

WCRC President Jerry Pillay, along with the other officers, welcomed Diaz-Canel to the meeting, noting that this meeting has been planned for a year—a year that has brought great changes to Cuba’s situation.

“Cuba is opening up to the world but also the world is opening to Cuba, and in that we see wonderful potential,” Pillay said. “Cuba has experienced isolation through the blockade for so many years but you have indicated absolute resilience in the way you’ve been able to survive. But now something new is being born and we think this will bring potential to the people of Cuba.”

Pillay and Chris Ferguson, WCRC general secretary, presented Diaz-Canel with the “Statement from Cuba” and encouraged him and the Cuban government to pass laws that would guarantee the rights of all churches and religions in Cuba.

Diaz-Canel thanked the WCRC and its members for their long support to end the blockade, as well as advocacy on a number of other issues. He noted that the Cuban government shares many of the same goals for social and economic justice as the WCRC.

“We should never stop in building a better world,” Diaz-Canel said. “Together we can transform the world.” 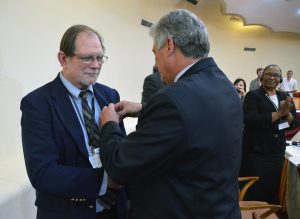 Diaz-Canel then surprised Ferguson by presenting him with the Medalla de la Amistad (Friendship Medal) from the Cuban government for Ferguson’s decades of humanitarian and advocacy work on behalf of the people of Cuba.

In accepting the award Ferguson said, “You are honoring the church of Cuba, the love of their homeland and the importance of having solidarity with a church that has shown us how to survive. If I’m a friend of Cuba, it’s because the church in Cuba has called us to serve.”

Earlier in the day, the executive committee heard from a FARC peace delegation. The churches in Colombia and Latin America are involved in the peace process, working to accompany those who need protection against violent forces still active in Colombia. FARC delegation leader Marcos Leon said, “We are closer to peace than going back. And we count on you, the churches, so that side-by-side we can build, with our communities, dignified living conditions.”

The executive committee met in Havana, Cuba, 7-13 May 2016, and was hosted by the Presbyterian Reformed Church in Cuba.

One Comment on “Communion pledges solidarity with Cuban churches”