Conference focuses on migration and aggression in Europe 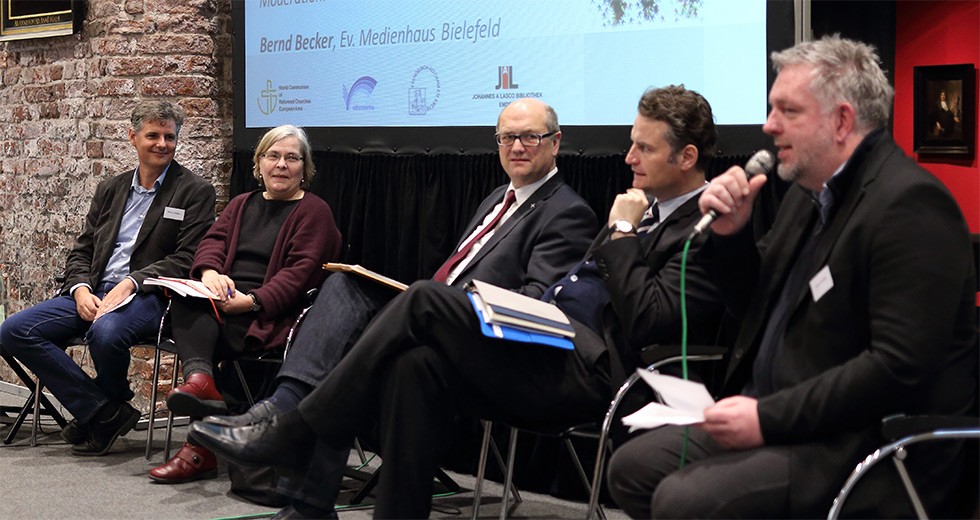 The remains of the Great Church of Emden, a splendid Gothic style construction that was destroyed by Allied bombs during World War II, were transformed in the 1990s into a specialized library for the history of the Reformed church and theology. Over the years the Johannes a Lasco Library has become a well-known Reformed conference center and a forum for art and culture. From 17-19 February 2016 it was the venue for an international conference on “Migration and Aggression in Europe” jointly hosted by the Reformed Alliance in Germany and WCRC Europe.

The 60 participants from various parts of Europe felt very strongly that the town of Emden which had been a safe haven for thousands of persecuted Reformed Christians during the 1500s and 1600s was a highly symbolic place to reflect on and discuss the current issues of migration. Until this day, the Great Church proudly wears the honorary title of “Moederkerk” (mother church) because it rescued the Reformed communities in the Netherlands from annihilation in the 1600s.

The conference began with an analysis of the political situation that triggered the unprecedented mass migration from the Middle East to Western Europe. In his introductory presentation the German journalist Andreas Zumach predicted a continuous flow of refugees from Syria and the region for the next two or three years. The lack of political stability in the Middle East and North Africa would lead to even more migration in the long term. He stressed that the world community had completely failed to support the United Nations’ Refugee Agency that is facing the greatest humanitarian challenge since its creation in the aftermath of World War II.

Several speakers revealed the fact that John Calvin was particularly sensitive to the situation of refugees, as he himself and thousands of other French Protestants had fled persecution and lived in exile. This had great influence on Reformed theology that, according to Herman Selderhuis from the Netherlands, created “a church model suitable for migration that can be transported and exported.”

Achim Detmers, general secretary of the German Reformed Alliance, based his paper on “Calvin’s Theology of Migration” on John Calvin’s Commentary on Exodus (1563), showing how the Reformer compared the plight of the Israelites in Egypt with the suffering of his fellow-believers in France and adopted clear political positions regarding topics such as care for the needy, resistance to tyranny and civil disobedience.

Drawing on John Calvin’s sermon on Galatians 6:9-11, the South African theologian Robert Vosloo explained the concept of “recognition” whereby “we will recognize our own humanity in the other, in the person who is poor and despised, in the stranger.”

Biblical studies offered another access to the topic of migration. Thus, in a study on Job 1:15 (“I am the only one who has escaped to tell you”), Rev. Sabine Dressler highlighted the importance of listening to the stories of survivors and of providing them the space and the audience to tell us about their experiences and traumata. Gusztav Bölcskei, from Debrecen (Hungary), reminded the participants of the importance of the Psalms in Reformed spirituality and worship, pointing out that they are the source of comfort par excellence for all those who experience persecution and oppression.

In his paper Herman Selderhuis expanded on the importance of protecting the stranger and of taking care of the “foreigner within your gates” according to the Old Testament. “The high esteem of the Old Testament in Reformed Theology helps cope theologically with migration issues,” said Professor Selderhuis, pointing out that in Deuteronomy and the Psalms the “stranger” or “alien” is often named together with the orphan and the widow as standing under God’s special protection. Beyond these observations he drew attention to the eschatological dimension of the topic that lies in the Christian conviction that “this world is not our home and we are a travelling company following Jesus.”

A historical approach was undertaken in Professor Susanne Lachenicht’s paper on “French-Reformed Theology and Huguenot Identity in Exile,” showing how Protestant refugees from France experienced rejection and xenophobia as well as hospitality in the various places of refuge.

Professor Paolo Naso, from the University of Rome, spoke about the “old and new dynamics of Immigration and Integration.” He described the various models of Integration such as the American “melting pot” model, the French assimilation model, the British model of multiculturalism and the Italian model of labour-centered integration, which in his view had all failed. Speaking on behalf of the Italian Federation of Protestant Churches he advocated a new paradigm of integration based on mutuality and taking into consideration the increased importance of the religious factor.

Martina Wasserloos-Strunk presented a paper on the significance of “strangeness” and “otherness” in modern thinking based on sociological research and empirical studies, and the conference closed with a panel focusing on the role of the Protestant churches in Europe. Participating in the panel were Martin Dutzmann, the German Protestant Churches’ representative (EKD); Doris Peschke, of the Churches Commision for Migrants in Europe; Günter Krings, member of the German Federal Parliament; Paolo Naso, Federation of Protestant Churches in Italy and Robert Vosloo, Faculty of Theology in Stellenbosch, South Africa.

A highlight of the meeting was the traditional tea-reception in the town hall of Emden hosted by Mayor Andrea Risius. In her words of greeting she explained how the port of Emden owed its wealth and influence in the 1600s to the migration of thousands of Reformed refugees and had a fleet larger than that of Great Britain. Ships brought goods from all over the world to the region of East Frisia including tea from overseas. “In the past few months Emden has welcomed many hundreds of refugees,” she said. “In this we remain true to our tradition but also in offering all visitors a cup of strong East Frisian tea with rich cream and sugar candy (Kluntje).”

2 Comments on “Conference focuses on migration and aggression in Europe”