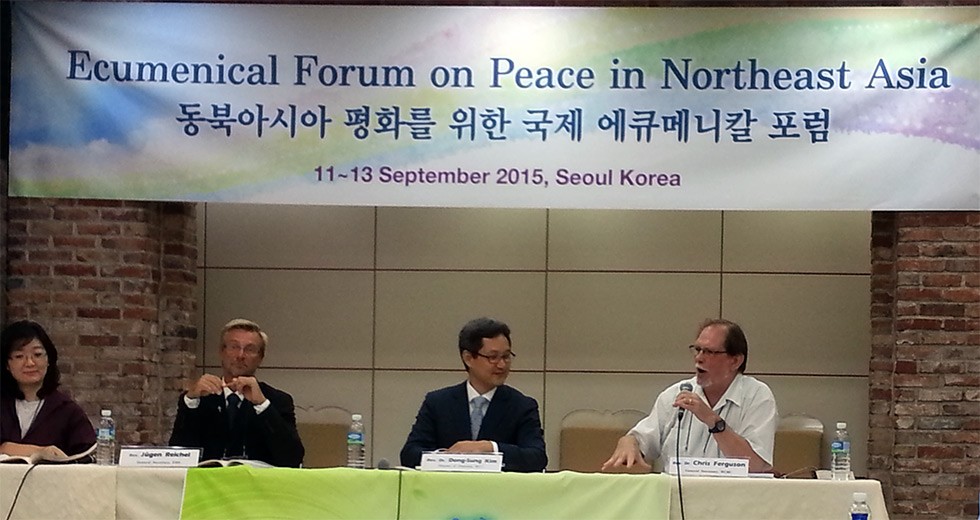 More than 120 representatives and leaders of WCRC member churches and ecumenical institutions from 20 different countries attended the forum from 11-13 September in Seoul. Both Jerry Pillay, WCRC president, and Chris Ferguson, WCRC general secretary, participated in the forum.

The PROK and PCK hosted the event to revitalize and strengthen the ecumenical commitment to justice, healing, reconciliation, and a peaceful reunification of the Korean Peninsula. These topics were all addressed during the forum, with a final message from the forum stating, “Peoples in Northeast Asia are longing for peace with justice; Korean reunification is an essential step in this process.”

The message celebrated the work of the PROK and PCK for peace and reconciliation while noting that it is not always easy: “It is a sign of hope that the PCK and the PROK hold this joint ecumenical forum… Not only in Korea but among the global Christian community, we are mindful that a costly unity among the churches is a prerequisite to a costly discipleship.”

The message continued: “The division of the Korean Peninsula and its human costs contradict God’s will for the fullness of life. It is a sin against God and humanity. The Church is called to transform itself and to engage in healing and reconciliation. However, without resolution of the Cold War hatred and enmities, including among Christians, the Church cannot contribute to peace with justice.”

“We engage this urgent moment with steadfastness and faithful endurance, realizing that reunification is not a prize but a process of healing, nurturing and wholeness.”

Ten commitments at the conclusion of the message focused on peace, reconciliation and the reunification of the Korean peninsula, its peoples and its churches.

It concluded with a call for the PCK, PROK and National Council of Churches in Korea to convene additional peace gatherings and encouraged “partner churches globally to prioritize their ecumenical agenda to include action and advocacy on Northeast Asia.”