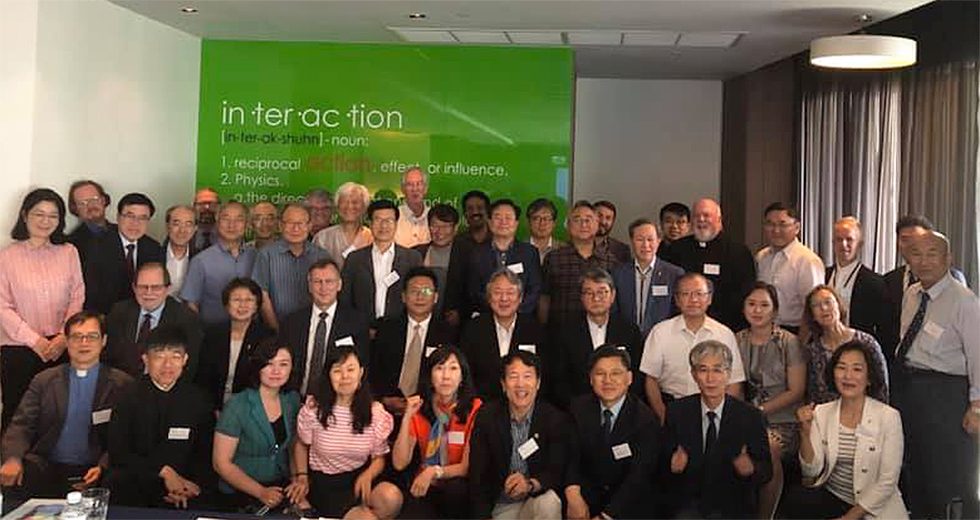 The Ecumenical Forum for Peace, Reunification and Development Cooperation on the Korean Peninsula (EFK) met 10-12 July in Bangkok, Thailand. Among the 46 participants from 11 countries were members of the World Communion of Reformed Churches, including General Secretary Chris Ferguson and Hong Jung Lee, WCRC Executive Committee member and general secretary of the National Council of Churches in the Republic of Korea.

The EFK issued a communiqué (see below) summarizing the current situation and making several statements intended to move the peace process forward.

The WCRC commends the EFK Communiqué to its members for consideration and action, especially to “uphold in prayer and to accompany in solidarity Korean Christians, and actively seek alliances with all organizations and people of good will who seek peace on the Korean Peninsula, in the region, and the world.”

“Seek Peace and Pursue It” (Psalm 34:14)
Communiqué of the Ecumenical Forum for Peace, Reunification and Development Cooperation on the Korean Peninsula – Bangkok 2019

The Ecumenical Forum for Peace, Reunification and Development Cooperation on the Korean Peninsula (EFK) met in Bangkok, Thailand, with 46 participants from 11 countries, including delegations from the Korean Christian Federation (KCF) of the DPRK and from the National Council of Churches in the Republic of Korea (NCCK).

Our meeting took place one year after the events of 2018 which inspired such powerfully renewed hopes of peaceful coexistence on the Korean Peninsula, the reunification of the long divided Korean people, and peace and care for the whole world.

In the intervening period progress towards peace has not occurred as hoped, and in the absence of such progress some renewed tensions and obstacles to peace have arisen.

However, despite these disappointments and delay, we observe and celebrate the important steps that have been taken on the path to peace, in particular by North and South of Korea in ceasing hostile acts against each other, pursuant to their respective commitments.

The EFK reaffirms its commitment to the vision of peace and reunification on the Korean Peninsula, and to the realization of the joint inter-Korean Panmunjom Declaration as the framework for achieving peace. As stated in the Panmunjom Declaration, there must be no more war on the Korean Peninsula. There must be an end to the longstanding division and confrontation that have afflicted the region. A formal end to the Korean War must be declared, and the Armistice Agreement replaced as soon as possible by a peace treaty, and a permanent and solid peace regime established. The objective of a nuclear-free Korean Peninsula must be pursued, within the larger objective of a nuclear-free world.

We reaffirm the principles of self-determination for the Korean people and inter-Korean leadership for the peace building.

Based upon the joint reflections and contributions of the KCF and NCCK delegations during our meeting, the EFK makes the following statements:

The economic sanctions and related policies (including travel restrictions) that continue to be imposed against the DPRK without relaxation poison the political environment for progress towards peace, seriously impede possibilities for people-to-people encounter—especially between North and South Koreans and between North Koreans and US Americans, and increasingly obstruct humanitarian access and diaconal cooperation. We therefore will explore ways in which we can raise awareness of the negative impacts of sanctions, and scale up advocacy for their relaxation and removal.

During our meeting we took note of an activity plan proposed by the NCCK, and will examine ways in which the EFK can help strengthen and bring a global dimension to these activities, including to Global Jubilee Prayer Movement during the Lenten season of 2020, as well as the ongoing Korea peace treaty campaign.

We also took note with interest of proposals shared during our meeting for convening Korean diaspora community representatives from key countries for the purpose of solidarity and prayer for peace on the Korean peninsula, and for establishing ecumenical formations in and between countries associated with the Korean peace process in order to advocate and promote progress towards peace.

We continue to uphold in prayer and to accompany in solidarity Korean Christians, and actively seek alliances with all organizations and people of good will who seek peace on the Korean Peninsula, in the region, and the world.