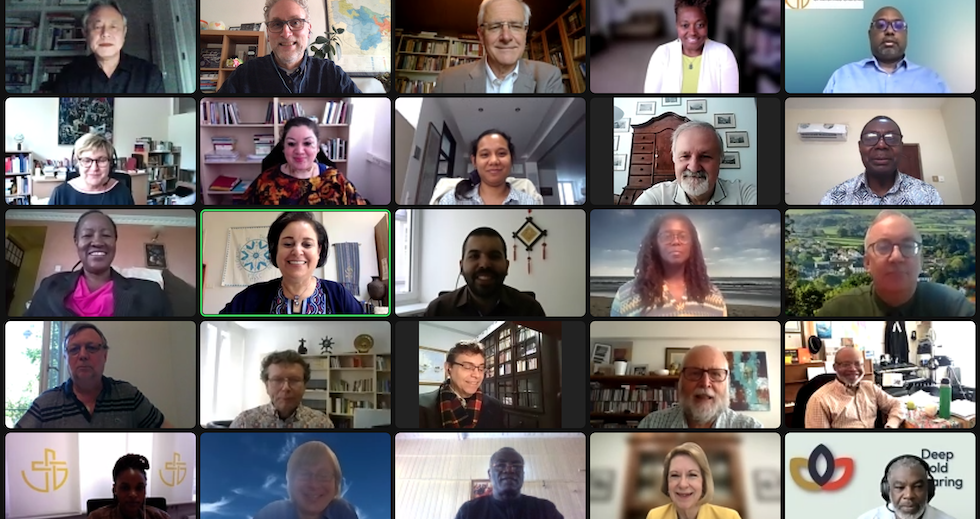 The work of the World Communion of Reformed Churches was pointed toward the 2025 General Council by the Executive Committee during its annual meeting, held 17-20 May 2022.

“We come together as an Executive Committee not to merely respond to reports, or to take decisions, but to answer the question about what does the Lord require from us as we gather as a Communion,” said President Najla Kassab in her address to the gathering, which was again held virtually.

In its report to the Executive, the Strategic Plan Programme Group (SPPG), represented by Rathnakara Sadananda, noted the success of the “COVID and Beyond” discernment process, held virtually from December 2020 through November 2021, and looked forward to continuing work on many of the issues raised within it.

“The SPPG observes that the Communion has realized in the ‘COVID and Beyond’ process what is possible in the way of involving people from all over the world in the work of discernment. In some ways the Communion is more connected and more activated than ever,” the SPPG Report stated.

The SPPG also praised the imminent start of the Global Reformed Advocacy Platforms for Engagement (GRAPE) project, with support from Brot für die Welt and Evangelische Mission Weltweit, and the upcoming establishment of an office in Rome, working collaboratively with the Waldensian Evangelical Church and the Church of Scotland.

The Executive endorsed the continuation of the Collegial General Secretariat (CGS) as the leadership model until such time as a general secretary is elected and installed into office. The CGS is composed of the WCRC’s three executive secretaries, collectively working to fulfil the constitutional obligations of the general secretariat and provide leadership to the Communion.

The General Secretary Search Committee reported that it has two candidates that it is prepared to interview at the appropriate time. The process has been put on hold until the necessary funds can be guaranteed to support a general secretary for an entire seven-year term.

In an effort to secure such funding, the Executive established a committee to bring proposals to the 2023 meeting that would allow the election of a general secretary and assure sufficient staff capacity. This committee will focus on short- and mid-term sustainability needs and explore more flexible working models.

In his Finance Report to the Executive, General Treasurer Johann Weusmann said that while the organization again achieved a surplus in its 2021 budget year, there are significant risks in the years to come. These include rising inflation and declining member church dues payments. Weusmann noted that over 70% of member churches did not pay their dues in 2021.

“Today we are called to stand firm and to secure financial resources, stability, and sustainability in the midst of financial challenges that threaten all ecumenical work,” said Kassab.

“While funds for programs are usually acquired without problems, we are challenged to bring the WCRC to a level of sustainability which allows the continuation of its operations,” she said. “Despite our understanding that sustainability is not defined narrowly in financial terms as our Strategic Plan claims, …how we will sustain the work of the Communion is a serious challenge to us all. Sustainability remains an expression of commitment, relations, ownership, and deepened communion. Sustainability is at the heart of strengthening the communion as a goal.”