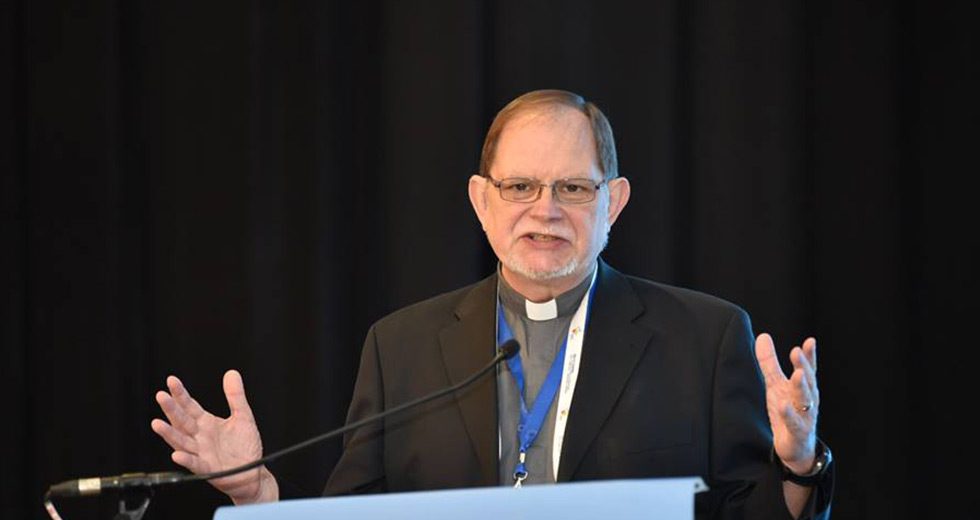 In his greetings to the Assembly of the Lutheran World Federation’s (LWF), Chris Ferguson, general secretary of the World Communion of Reformed Churches (WCRC), called for consideration of a joint meeting between the organizations.

“There are many things that we can and should do together,” Ferguson said. “I give thanks that God has given us the gift of partnership in mission, witness and diakonia with LWF. I hope that in six or seven years we will be able to celebrate our general assemblies in the same time and place. Separate meetings, yes, but joined for common worship, reflection and witness together. Can you imagine that! Let’s think about it!”

Ferguson noted that the two organizations continue to grow closer together, despite the WCRC’s move from Geneva to Hannover. In particular he raised the WCRC’s upcoming association with the Joint Declaration on the Doctrine of Justification (JDDJ), which will be signed at a special worship service in Wittenberg during the WCRC’s General Council.

At the same service, the two organizations will also sign the “Wittenberg Witness.” This common witness will confess the tragedy of a divided church, claim the fruit of the two organizations’ decades of committed dialogue and celebrate the new steps towards unity taken by their member churches around the world.

With the signing of this document, Ferguson said, “[We] as churches of the Reformation [will] make public and visible our commitment to Christian unity by pledging concrete steps to deepen the reception and put into practice the results of our Reformed-Lutheran dialogue, On Being the Church, so that the unity of the church for the transformation of the world becomes a reality in these time of peril for the people and planet.”

The LWF Assembly meets 10-16 May in Windhoek, Namibia. Ferguson addressed the assembly on Saturday, 13 May.

The WCRC General Council will meet 29 June through 7 July in Leipzig, Germany.