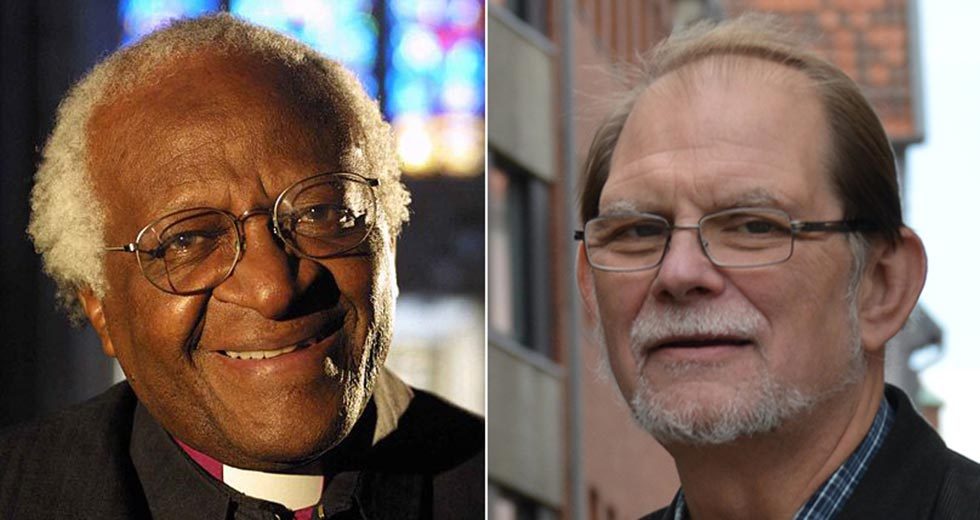 The Vancouver School of Theology (VST) is pleased to announce the recipients of VST’s 2017 Doctor of Divinity, Honoris Causa, Archbishop Desmond Tutu and The Rev. Chris Ferguson.

The 2017 VST Honorary Doctorates will be awarded to the recipients at the VST Convocation Ceremony on Monday, May 8th at 7 pm, at Christ Church Cathedral, 690 Burrard Street. Archbishop Tutu will receive his Honorary Doctorate in absentia. All are welcome to attend.

THE REVEREND CHRIS FERGUSON is the second General Secretary of the World Communion of Reformed Churches (WCRC). He received his master’s degree from the Vancouver School of Theology (1978), and completed his post-graduate theological studies at the University of Montréal Faculty of Theology in the pastoral studies department.

Ferguson was the Presbyterian-United Church chaplain and director of chaplaincy services at McGill University in Montréal, Quebec, for seven years. While at McGill he was an adjunct professor at the United Theological College and the Montréal Institute for Ministry where he taught courses in ministry, counselling and church and society. Prior to the years in Montréal he served as minister/rector of a joint United Church-Anglican parish in Northern Quebec and as a college teacher, counsellor and community worker in British Columbia where he founded a youth centre and a crisis intervention centre.

From 1987 to 1991 Rev. Ferguson was appointed as United Church of Canada’s global mission personnel to work with the Latin American Biblical Seminary in San José, Costa Rica, where he was professor of theology and ministry, teaching and leading workshops throughout Central America in a context of war and civil conflict. He also was a visiting researcher in human rights and the church at the Ecumenical Research Department. Rev. Ferguson was the general secretary of the Division of World Outreach for three years and from 1991 until 1999 was the area secretary for the Caribbean and Latin America. In these roles he provided leadership in the UCC’s ecumenical, mission, justice, human rights, theological education, development and partnership work in Latin America, the Caribbean and globally.

From 2002 to 2004 Rev. Ferguson was the executive minister of the Justice, Global and Ecumenical Relations Unit and ecumenical officer of the United Church of Canada, and from 2004 to 2006 he was the World Council of Church’s representative in Jerusalem, making connections between local and global organizations to promote understanding, reconciliation and peace in the region. From 2006 to 2010 Ferguson represented the WCC at the United Nations headquarters in New York City.

From 2011-2014 Ferguson served in Colombia with the Programme for Ecumenical Accompaniment in Colombia (PEAC) as international ecumenical advisor to the programme, sent as global mission personnel of the UCC in conjunction with the Latin American Council of Churches–Colombia and the Presbyterian Church in Colombia. PEAC accompanies communities in Colombia that are victims of violence and engages in global ecumenical advocacy for a just peace.

Within Canada Ferguson participated actively in several national ecumenical justice and human rights coalitions and was a member of the founding board of directors of Kairos Canada, as well as serving on the board of the Canadian Council of Churches. He also helped found local and national refugee rights groups.

Over the last three decades Ferguson has been an active participant and leader in various World Council of Churches committees and commissions in Latin America and globally. As a member of the Heads of Agencies Network he helped initiate the first WCC funding roundtable. He has taken an active lead in global ecumenical advocacy and public witness for peace, justice, ecological justice and human rights. He was on the World Alliance of Reformed Churches executive committee for a period preceding the 2004 General Council in Accra, Ghana, participated in the “Covenanting for Justice Process” and played an active role on the drafting committee for the Accra Confession.

Ordained a priest in 1966, ARCHBISHOP DESMOND TUTU taught theology in South Africa prior to being appointed Dean of St. Mary’s Cathedral in Johannesburg in 1975, the first black person to hold that office. He subsequently became General Secretary of the South African Council of Churches in 1978. He became Bishop of Johannesburg and was consecrated as Archbishop in 1986. Archbishop Tutu led the Anglican Church of South Africa as Archbishop of Capetown for 10 years from 1986.

Archbishop Tutu’s ministry in South Africa, his ‘irresistible humanity’ and his commitment to the work of truth and reconciliation have inspired millions of people throughout the world. He received the Albert Schweitzer Prize for Humanitarianism in 1986, the Pacem in Terris Award in 1987, the Sydney Peace Prize in 1999, the Gandhi Peace Prize in 2007 and the Presidential Medal of Freedom in 2009.

Through the Tutu Foundation founded in 2007, the southern Africa concept of Ubuntu, which seeks reconciliation and not revenge, has been used and promoted in the UK with young people involved in gangs and to tackle bullying, prejudice and discrimination. Archbishop Tutu continues to work as an activist on world issues connected with democracy, freedom and human rights. In 2007, he became Chairman of the Elders, an assembly of influential leaders who tackle some of the greatest challenges facing the planet.

Vancouver School of Theology continues in its commitment to the ministry of reconciliation particularly with Canada’s First Nations Peoples. Archbishop Tutu has been a direct and central inspiration for this most important development in Canadian common life. Canada’s Truth and Reconciliation Commission, implemented to acknowledge the human rights violations of the past and to build new relationships for a brighter future, takes its rise from its South African predecessor in which Archbishop Tutu played such a crucial part.