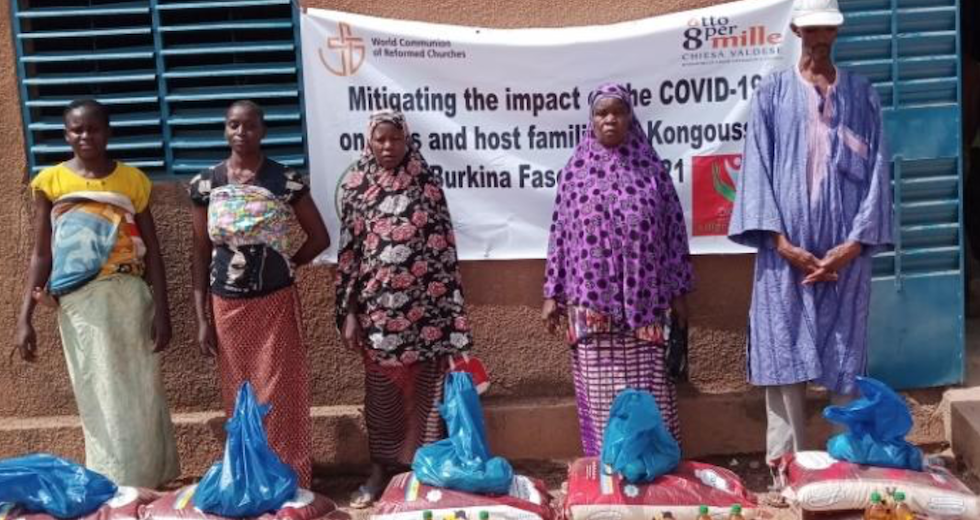 Through the Reformed Partnership Fund the World Communion of Reformed Churches provides small grants to member churches to implement strategically impactful, mission-related projects important to the life of a church and its surrounding community, particularly in the Global South.

For the past two years, the Partnership Fund has focused on providing support to member churches which dealt with the impact of the COVID-19 pandemic, in all its manifestations. Here are a few of their stories:

The Reformed Church in Zambia’s Touch Project empowered vulnerable but viable members from both its congregations and non-church groups to overcome the economic challenges they were facing due to high levels of poverty, a situation that was worsened by the pandemic. Among other activities, the project promoted sustainable agricultural projects, including poultry farming and goat keeping in five communities.

Stakeholders were initially brought together for a consultative and awareness session. Eight people were then selected to be trained to become trainers themselves, covering three targeted districts. After their initial work with people in these districts, nearly 1,000 chicks, along with the equipment, food, and vaccines needed to raise and process them were purchased, distributed, and installed. This resulted in the creation of eight broiler chicken businesses. At the same time, two groups were provided support to upgrade their goat farms, while another fifty farmers were trained in sustainable agriculture.

The Touch Project will continue with other activities, such as planting trees to address soil erosion and a back-to-school campaign, as well as ongoing support and monitoring of the agricultural projects.

A consultation early in the pandemic held in Jabalpur, India, led the Church of North India to initiative a project to support pastors. “Our Pastors and our frontline workers, who are especially posted in the extreme, rural locations suffers multifold. They are working and at the same time being totally cut off from every kind of physical, mental, spiritual, and resource support. Their family suffers, too, along with them,” they said.

While congregations were well connected to their members in the cities, in rural areas not even all the pastors had mobile phones. The supported project not only provided smart phones to pastors, it also provided audio-visual aid and training on Internet usage, including online sermons.

Not only did this help bridge the digital divide, but the project better connected pastors in the countryside with their colleagues in cities. As the church reported, ”the project brought a sigh of relief to the pastors. It made their work easier.”

Prior to the pandemic, attacks by extremist Islamic military groups in Burkina Faso, Mali, and Niger had killed hundreds and displaced 1.5 million people. The Association des Eglises Evangéliques Reformées du Burkina Faso (AEERB) provided refuge for 240 people at their headquarters, with support coming from their members, many of whom were impoverished.

And then came the pandemic, exacerbating the economic crisis. The money provided by the Partnership Fund was used to provide emergency food and sanitation kits to the internally displaced people already under the church’s care, as well as support dozens of other vulnerable households and raise COVID-prevention awareness. The COVID-prevention awareness efforts also obtained cooperation from the government’s health ministry.

“The AEERB is appreciating the solidarity expressed by the WCRC through its Partnership Fund to support Christians and non-Christians in an emergency,” the church reported.

An economic crisis in Lebanon has seen four in five people fall into poverty as the local currency plummeted in value, declining by 95%. To provide basic assistance, the National Synod of Syria and Lebanon’s Compassion Protestant Society created the Agro-Basket Project.

The baskets contained seeds for ten kinds of vegetables along with organic fertilizer so that targeted families could grow their own home gardens, thus relieving the need to expend as much on basic groceries.

“Two years ago, a similar project would not have registered on the radar screen of most Lebanese families. Today, with every household aiming to reduce the burden of any expense to be able to put food on the table, beneficiaries have responded with enthusiasm, satisfaction, and gratitude,” reports the church.

The main source of financial support for the Partnership Fund is through the Waldensian Church’s Otto per Mille fund and a special grant from the Church of Westphalia (Germany), although donations from WCRC member churches, partnership organizations and individuals are periodically received and always welcome.