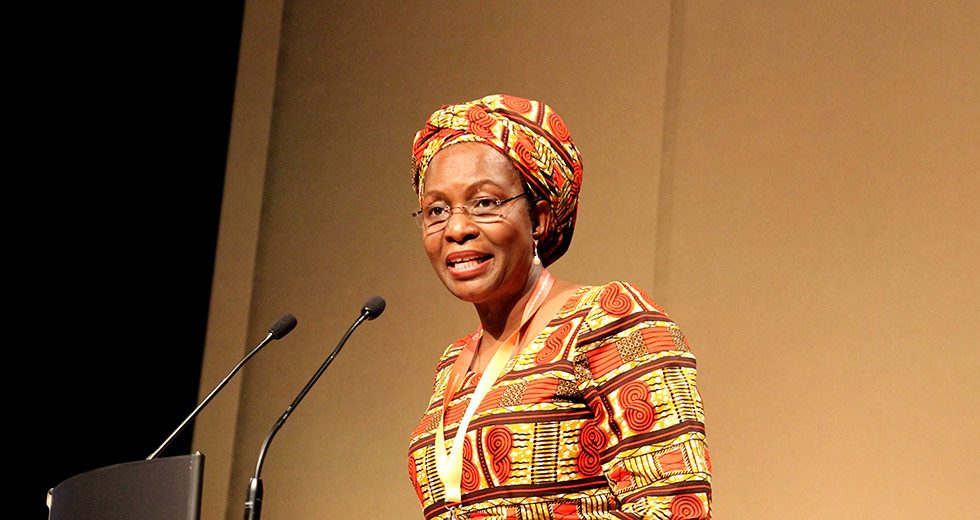 In a world marked by injustice and discrimination, churches need to recognize how they are intertwined with structures of power if they are to promote justice and solidarity, a global gathering of Reformed Christians has heard.

“The world is calling upon the faith leaders to use their power for justice for the excluded and discriminated against, and for the exploited planet earth,” said Dr. Isabel Apawo Phiri, an African theologian originally from Malawi.

Phiri was speaking to the General Council of the World Communion of Reformed Churches, meeting in the eastern German city of Leipzig from 29 June to 7 July.

Now based in Geneva as deputy general secretary of the World Council of Churches for public witness and diakonia, Phiri was speaking at a 1 July presentation with Indian theologian the Rev. Dr. Philip Vinod Peacock on justice from the experience of Africa and Asia.

Speaking on gender justice, Phiri said gender oppression permeates all sectors of life and interacts with other forms of oppression such as class, race, ethnicity, age and sexual orientation.

“The extremely difficult conversations of our times have been about all forms of sexual and gender based violence in the church and society,” said Phiri, especially when gender-based violence is happening in churches.

“Sexual and any form of violence against minorities and marginalised groups of people is about power and control,” said Phiri, formerly director of the Centre for Constructive Theology at the University of KwaZulu Natal, in Pietermaritzburg, South Africa.

Human trafficking is on the increase, said Phiri, and many children and women migrants and refugees are facing sexual and gender based violence in camps, en route to new countries and in the host countries.

“While the message of the gospel is about inclusivity, as communities of faith, we are not speaking out loud enough to stop the killing of people on the basis of their sexual orientation,” she continued.

“The time of normalizing the oppression of the minorities in our churches is over,” said Phiri.

Church leaders, said Phiri, needed to use their authority to speak out against any form of injustice, starting from within the church itself.

“Hard conversations are still taking place about whether women should be allowed to take leadership positions in the church or not,” said Phiri. “There are still few women who are participating in leadership roles including the ordination of women.”

Among other “hard questions” being asked, she said, is whether gender differentiation is the result of creation by God and therefore to be accepted as the norm, or constructed by cultures and religions and therefore is open to change.

“Our use of worship language is still in question,” Phiri continued, and there are still debates about “whether we should use inclusive language in our worship or continue to use male dominated language.”

In his presentation, Peacock spoke of the “deepening crisis of the world,” seen in the military complex, neo-liberal capitalism upholding the idolatry of profit, a rapidly growing racism extinguishing young black men or locking them away and a wave of Islamophobia.

“And these forces combine in special and unique ways to inflict violence on the bodies of women and sexual minorities,” said Peacock, associate professor at Bishop’s College, a theological college belonging to the Church of North India in Kolkata.

“The military-industrial-patriarchal complex is a many headed monster that is destroying life and denying the promise of life in its fullness,” he said.

At the same time, he warned, the church needs to understand that it is located today in the midst of power. “We are powerful and are responsible for much exclusionary violence around the world,” said Peacock.

He underlined the importance of the WCRC’s Accra Confession of 2004 which called for a faith commitment in the face of economic injustice and ecological destruction.

“Our struggles for justice arise out of our faith and our commitment to struggle to be faithful disciples of Jesus in our world today,” he said. “It is not Christians who should be involved with acts of justice, rather it is doing acts of justice that make us Christian.”