“God has a plan,” say interns 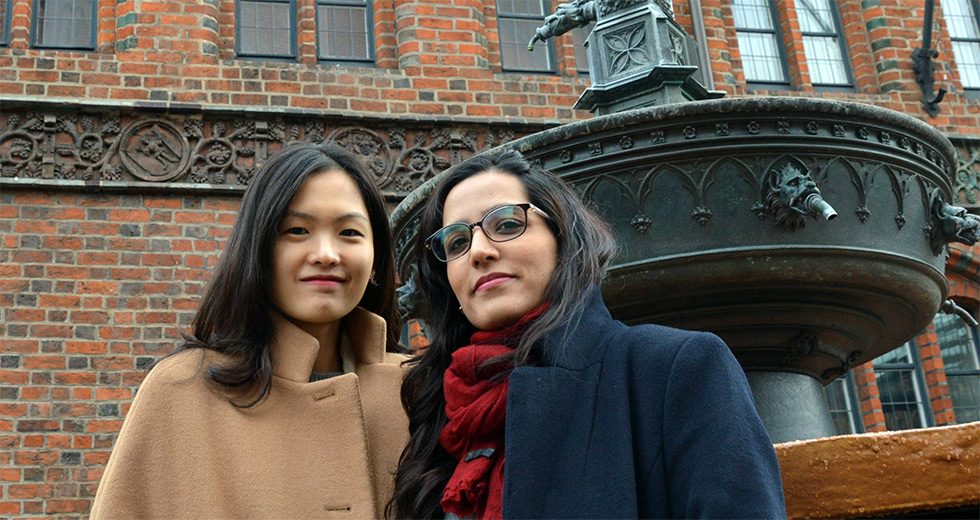 Coming from two diverse cultural backgrounds the new interns for the World Communion of Reformed Churches (WCRC) began their journey in Hannover, Germany, earlier this month.

Eri Yoon and Anam Gill, coming from South Korea and Pakistan respectively, were greeted by the German winter—which, according to them, is not as harsh as they had expected!

The WCRC’s one-year internship programme brings together young people from member churches to take part in the functioning of the WCRC and learn more about Christian unity and the ecumenical movement.

Both Anam and Eri are excited about their new beginning at the WCRC’s office, hoping to take back the wealth of knowledge and wisdom gained from their experiences to their home countries. They both strongly believe that God has the best plans and coming to Hannover is no coincidence.

Eri literally grew up in church because her dad was a pastor in Busan, South Korea. She started playing piano at worship services in his church and later served as a Sunday School teacher before going to the seminary herself. She completed her Bachelors degree in piano but decided to obtain her Masters in Divinity because she wanted to serve the church and help her dad as well.

“Unity of church is very important; when I read the Bible I find that,” she says. “Last year I was here as a delegate to the WCRC General Council in Leipzig. This made me want to learn more about the concept of church as one body of Christ. There is a term, ‘Kairos of God,’ which means God’s timings, and the more I prayed what I should be doing, the answer I got was clear that I need to apply for this internship.”

Anam, a journalist by profession, has been freelancing for various international and national dailies, but her interest in the ecumenical movement developed in 2006 when she was part of the World Council of Churches (WCC) 9th General Assembly in Porto Alegre, Brazil. Later she was a part of WCC’s Living Letters delegation to Liberia and Sierra Leone and freelanced for WCC in their communications department, including at the WCC 10th General Assembly in Busan, South Korea.

Before coming to the WCRC she was working on the Dialogue Café Lahore project, a space for dialogue connecting global and local youth on issues regarding sustainable development. She founded this space in 2016 and believes that dialogue is essential for peacebuilding and conflict transformation.

Through this internship, she hopes to have a broader understanding of the church, ecumenical movement and the work of the WCRC. “Hailing from Pakistan where Christians are a very small minority, I have always wanted to know how Christian unity can empower the less privileged segments of a Christian community, especially in places where they are a minority,” she says.

Anam is looking forward to her year in Germany which she finds very intriguing and enriching: “I have seen so many beautiful churches here and I feel so happy just walking in churches without any fear of it being bombed, unlike in my country, and pray peacefully whenever I want to.”

The WCRC’s internship programme is made possible through contributions by the Evangelisches Missionswerk, Reformierte Kirchen Bern-Jura-Solothurn and the Presbyterian Church of Korea.