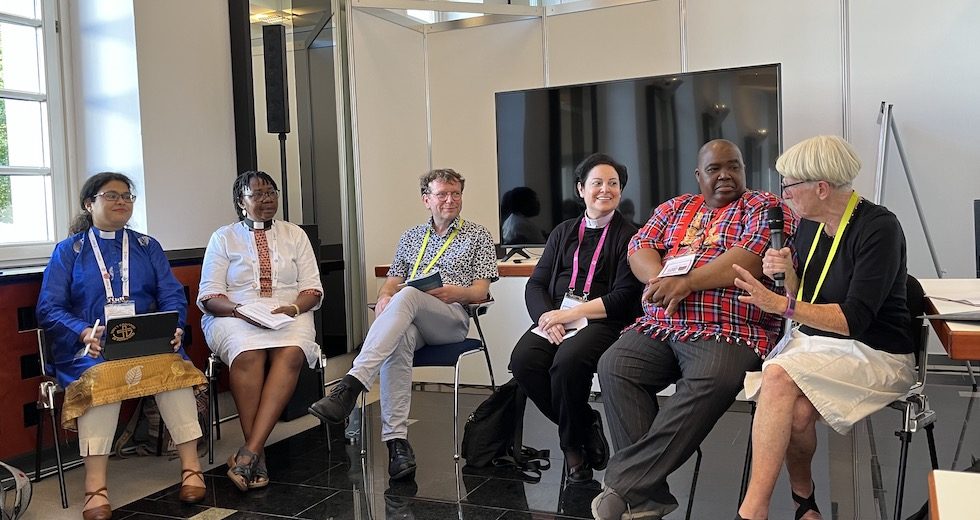 The commitment of the World Communion of Reformed Churches (WCRC) to gender justice—with the ordination of women as a particular focus—was the topic of a workshop at the World Council of Churches 11th Assembly.

Dorcas Gordon, of the Presbyterian Church in Canada, introduced the WCRC’s Declaration of Faith on Women’s Ordination, adopted at the 2017 General Council, as “a definitive statement on women’s ordination, and not a decision the WCRC has taken lightly.”

The declaration begins: “God, through the Holy Spirit, calls both women and men to participate fully in all the ministries of the church.” It testifies to the WCRC’s belief that women and men are created equally in the image of God and that they therefore should be treated with equal respect and dignity. It calls on WCRC member churches to declare their commitment to assure that both women and men have equal standing to reflect their common incorporation into the body of Christ in baptism and service.

“This doesn’t mean that women are ordained instantly in the fellowship or given full authority,” said Gordon, also wondering, “How long will it take to move these systems” that prevent women from responding to God’s call in their lives?

“The ordination of women is not an easy thing, but we are on the journey,” said WCRC President Najla Kassab of the National Evangelical Synod of Syria and Lebanon (NESSL).

Kassab, along with Jyoti Singh Pillai of the Church of North India and Peggy Kabonde of the United Church of Zambia, shared their experiences as they fulfilled their calls to be ordained ministers. All three met resistance or challenges first in obtaining theological education and then in being placed as ministers within their churches.

A decade after the first woman in her church was ordained into a chaplaincy position, Kabonde’s initial placement as a minister-in-training was in a small, rural congregation “because they were afraid that men and women in the church were not yet ready to receive women in ministry. And when it was time to be ordained, it was a big issue. The members we had served raised their voices in support—and so the change had to come.”

Kabonde went on to become the United Church in Zambia’s first female general secretary. “All my time serving was to look ahead to see how I could motivate young women who wanted to be part of the ministry. I knew that once women get educated, through the power of the Holy Spirit they would be able to work. The gifts of women, if appreciated, can do so much,” she said.

Already educated and practicing as a lawyer, Singh Pillai felt God’s call to ministry but was strongly discouraged by friends and family. “I kept praying and praying and praying. Let me take the first step; if it’s God’s will, he will help me,” she said.

After a less-than-smooth interview with the pastoral committee, “I was sure they wouldn’t call me back. But this is where the Holy Spirit works. After six months, I got a letter from my bishop—and off I went to Bishops College in Calcutta,” she said.

Even after receiving her theological degree, the path to ministering at her own church was met with resistances and struggles. But when opportunities presented themselves—including to preach—she took them and ultimately was given her own congregation.

“If a woman can birth a child, then why can’t she baptize, give communion, and also bury?” asked Singh Pillai. “What is important is that we educate our churches, that we empower our women to speak up for themselves. When you are talking about women’s ordination, don’t just settle for tokenism. Ask for equal space.”

Kassab began her theological journey at the Near East School of Theology, studying Christian education. But when she sought a theological degree, she had to go abroad, to Princeton Seminary in the United States.

“I decided not to be ordained in the States. I wanted to do so in my home church,” said Kassab. She took a position in Christian education for NESSL. The door to ordination was opened a crack in 1993 when a decision was made to give women preaching licenses, but it wasn’t until 2017 when the first woman was ordained. Kassab was the second.

“I believe there is a new spiritual blessing in the life of our churches where women are ordained,” said Kassab.

Lungile Mpetsheni, general secretary of the Uniting Presbyterian Church in Southern Africa, said, “It is important that men should be a part of this struggle. It needs to be challenged by all and to say that everyone is created in the image of God. We have to be together as allies in the struggle for justice.“

Hanns Lessing, WCRC acting general secretary as part of the Collegial General Secretariat, said the Declaration of Faith “is a very, very strong statement which allows discussion even in member churches that do not ordain women. It is a very important tool for us to work. We are very good at proclamation but taking the step from there to witness is often where we fail. We really must live out the words we are speaking.”

Lessing said the WCRC would be conducting a “gender audit” in the coming months to measure the expectations and needs of women; the status of female ordination, placement, and leadership in member churches; and the development of action plans to move toward ordination for those several dozen member churches that do not yet do so.

More information on women’s ordination can be found here: wcrc.ch/justice/gender-equality