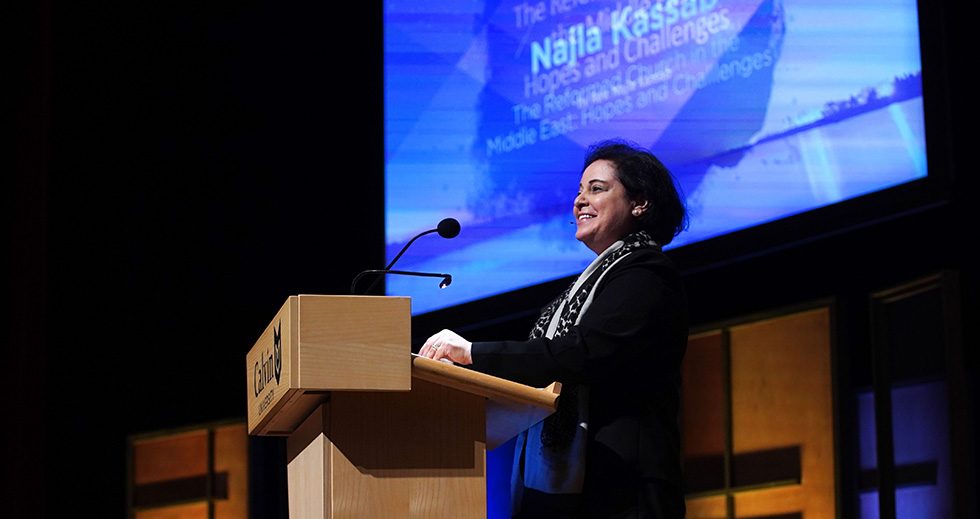 “Hope can endure if we keep God first.”

Even in the midst of a terrible civil war, the Christian church in Syria is strong and committed to caring for people who have been affected by the conflict, said Najla Kassab, president of the World Communion of Reformed Churches, during the Stob Lecture wrapping up this year’s Calvin University January Series.

Kassab pointed out that Calvin University, in Grand Rapids, Michigan, USA, was where the World Communion of Reformed Churches was founded in 2010. She has been involved in its work since then and was elected president in 2017.

“This is where our journey started,” she said. “The World Communion of Reformed Churches is where 100 million members from more than 200 churches from around the world come together to speak about justice.”

As president of the WCRC, Kassab travels internationally for gatherings and speaking engagements. 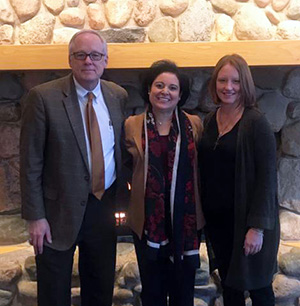 But at Calvin she focused her remarks on the the Reformed church in the Middle East, especially regarding Lebanon and Syria.

“There has been so much pain and loss, especially in Syria, over the past few years. The challenge of the church is to be present in the midst of that pain.”

“The churches there are going outside their walls and helping people in need,” said Kassab, one of the first women to be ordained in the National Evangelical Synod of Syria and Lebanon.

The number of Christians is fewer and fewer in Syria, she said, dropping from about one million before the war to about 400,000 today. “But I believe the church is stronger than before the war. I think the commitment of the church in that area is growing,” said Kassab.

Kassab sketched a history of the Reformed churches in the Middle East, detailing the improvements this small group of churches have made in education, social services and boosting the role of women. Presbyterian missionaries began the American University of Beirut—one of the first universities in Lebanon—in the mid-1800s. Later a hospital and orphanage were connected to the school.

“This university has helped to shape our heritage and shows the impact a minority church such as ours can have on a nation,” she said.

Also in the mid-1880s, missionaries started the American Protestant School for Girls, which helped to break down stereotypes of and restrictions on the lives of women.

“Education has helped to empower and raise the status of women. It has led to the liberation of Middle Eastern women and allowed them to use their talents and be good contributors in society,” said Kassab. “This has helped us to experience God’s justice and love. My presence here is a result of that.”

Kassab earned her bachelor’s degree in Christian education from the Near East School of Theology in 1987 and her master of divinity degree from Princeton Theological Seminary in 1990. In 1993 she received the first preaching license offered to a woman by the National Evangelical Synod of Syria and Lebanon, and in March 2017 she became the second woman to be ordained as a minister in the synod.

“My church has helped to lead the way” and has served as an example and inspiration to other Protestant churches, she said. Kassab also credited Protestant churches with beginning widespread publication programs that played a key role in education and in translating the Bible and other materials into many Middle Eastern languages.

In addition, Protestant churches have played an important role in the ecumenical movement. “We have been called to open up to other churches and to work more closely together. This is one way we truly live out the love of Christ.”

One important way the church has been present has been through primary school education, especially during this time of strife along the Lebanese border, where some 1.5 million refugees from the war in Syria are living in small, makeshift camps and communities.

“Often people are not comfortable coming to church, but they will come to our schools,” Kassab said in a question and answer session at Calvin Seminary following her lecture. “Schools are places where we can welcome Christian and Muslim students together and build bridges.” 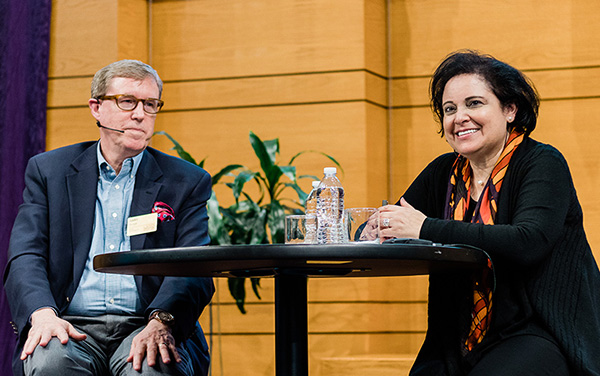 Parents want their children in these schools, which often offer the children respite from the rigors of living in a refugee camp. In school, they are fed, helped to wash up, and are sometimes allowed to stay for periods to avoid troubles in the camps.

“There are so many needs. We help people continue to survive,” said Kassab, whose ministry over the years has been devoted to working with women and children. “You can’t close your doors to refugees and say you are a church.”

Her comments on the role of the church help to tell the larger story of Lebanon, which at first was reluctant to accept so many refugees. But that has changed, although there are still many tensions, since the ongoing horrors of the Syrian civil war became clear.

“We open schools to take care of the children. They are the hope for the future. But at the end of the day, your heart is broken when they go back to the camp,” said Kassab.

Looking ahead, she said the church must play an important role in helping to bring about healing and reconciliation when the war finally ends and many refugees return home to Syria. Especially important will be to build bridges between people of faith.

“We need to encourage a dialogue of life,” said Kassab. “There is richness when we grow with other religions. Muslims are also children of God.”

She pointed to how, even amid the ruin of war, Christian and Muslim youths one day held a lively football game as people watched and cheered.

In the region where Judaism, Christianity, and Islam began, the church must rely on its root message of love. Even as wars rage, hope can endure if we keep God first, she said.

“We need to retain the more moderate aspects of religion,” said Kassab. “The more that violence is encouraged, the more we are stuck with attitudes of fear and radicalism grows.”

The Stob Lecture Series is named in memory of Dr. Henry J. Stob, a professor at both Calvin University and Calvin Theological Seminary who died in 1996. The subject matter of the lecture series is related to the fields of ethics, apologetics, and philosophical theology.

Since 2017 the Stob lecture has been incorporated into the January Series and caps off the month-long series of presentations focusing on a range of current topics. This year those topics included the story of a sports writer’s adoption of a little girl from Haiti, a look at the ways in which social media affects young people, and a call to address the need for clean water across the world.

Kassab also participated in the Calvin Symposium on Worship, met with leaders of the Christian Reformed Church in North America (CRC) and Reformed Church in America (RCA), both WCRC members and will join in worship at Pillar Church, a joint CRC-RCA congregation, in Holland, Michigan, on Sunday.