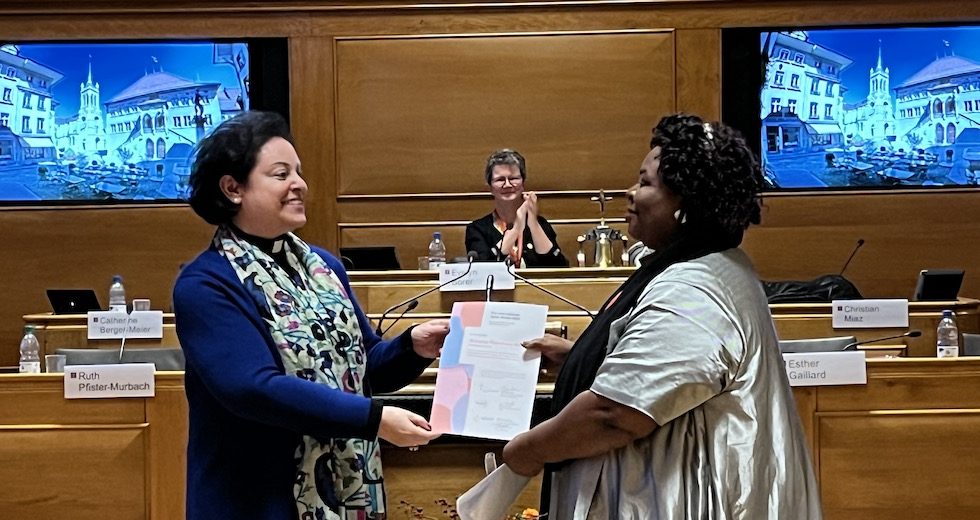 Rebecca Mutumosi Mfutila, an ordained minister in the Evangelical Community of the Kwango (Communauté Evangélique du Kwango (CEK)) was awarded the 2022 Sylvia Michel Prize in Bern, Switzerland, on 7 November.

The Sylvia Michel Prize, co-sponsored by the Protestant Church of Switzerland (PCS) and World Communion of Reformed Churches (WCRC) promotes and supports individuals and projects for the development of women in leadership in Reformed churches worldwide.

“The awarding of the Sylvia Michel Prize raises awareness that church leadership bodies in many places are still unequally composed. With the award, we show pioneering women like Rebecca Mutumosi Mfutila around the world that we stand by their side,” said Rita Famos, PCS president.

“It is an act of solidarity and commitment to women who are in leadership and who insist to use their talents on all levels of the ministry of the church,” said Najla Kassab, WCRC president. “Rebecca has become a role model for many young women. She encourages them to become involved in the leadership of the church and society.”

Mfutila, the first ordained minister in her church in 2014, worked as a pastor and also volunteered as general secretary of the CEK Women’s Federation in Kinshasa, Democratic of Congo, from 2002 to 2010; she has been its president since 2010. From 2010 to 2015, she led the women’s ministry of the national association Église du Christ au Congo (ECC). Since 2020, Mfutila has additionally been responsible for women’s concerns at the national federation of the various Protestant churches in ECC.

“I consider the Sylvia Michel Prize as an invitation to work even harder in the struggle for the advancement of women. This is not an easy task, especially in the context of our underdeveloped countries,” said Mfutila in her acceptance remarks. “I therefore call on all people of good will to help us in any way to carry out this serious and noble mission.”

“This prize reflects the depth of our understanding of the priesthood of all believers, the call of Christ to all those who are baptized, and the journey of the Holy Spirit in the life of the church as we envision together how to be the body of Christ in the world,” Kassab said. “What brings us together is our hope in the God of life. Together we will continue to work for a better tomorrow under the eyes of God.”

Lini Sutter, head of the PanKS leadership team, looked back at the beginnings in her speech: “In 2005, when we ten women presidents—most of us the first in the presidency of our churches—met at the Rügel in Aargau, we did not yet know where this togetherness would lead. We were interested in mutual exchange, encouragement, and strengthening. The Sylvia Michel Award, created in this spirit, recognizes the competence with which women carry and lead churches.”

PanKS will soon dissolve but the PCS, in partnership with the WCRC, will continue to award the Sylvia Michel Prize.