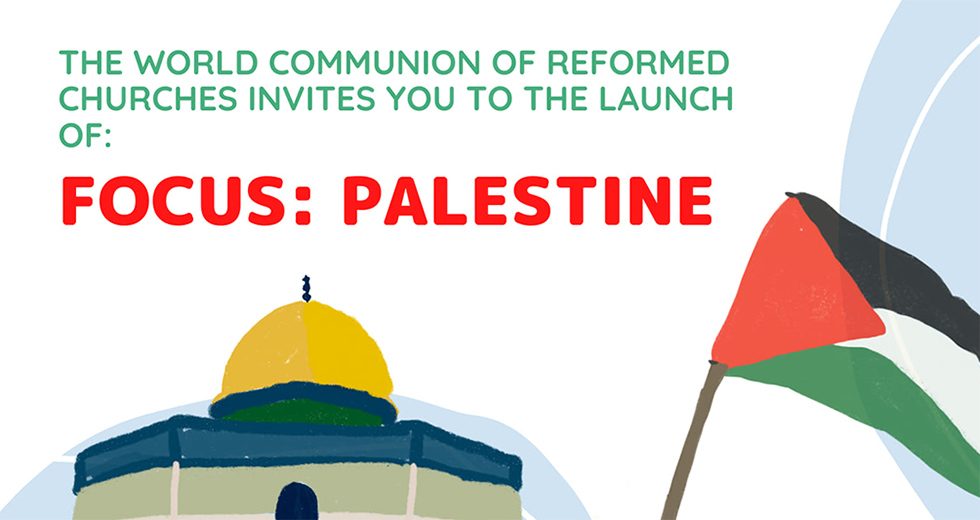 “The World Communion of Reformed Churches (WCRC) is noted for being called to communion and committed to justice. Perhaps nowhere is this and the theological implications of it so much brought together as in the case of what is happening in Palestine,” said Philip Vinod Peacock, WCRC executive for justice and witness as part of the collegial general secretariat, at the launch of the new Focus: Palestine resource.

Focus: Palestine is a comprehensive resource that lifts up Palestinian voices while placing the situation into theological, historical, and political contexts. It is the direct result of actions taken by the 2017 General Council, taken after hearing the cries of Palestinian Christians for justice and solidarity.

“Today is a time of thankfulness for moving one step forward as we affirm our commitment and support to our Palestinian brothers and sisters who continue to face injustice and suffering. We celebrate together launching a valued resource, Focus: Palestine, as we invite our churches to hear the stories of the Palestinians and revisit theologies that have been employed to legitimate the oppression of the Palestinian people. Today we recommit our walk together for a prophetic voice,” said Najla Kassab, WCRC president.

A webinar featuring speakers from around the world officially launched the resource, which is composed of three parts—1) Voices and Lenses, 2) Theologies, Ideologies, and Resistance, and 3) Systems of Sin and the Jerusalem Microcosm—an extensive appendix, and over a dozen videos.

“We global Christians have been asked by our siblings in Palestine to be engaged in telling the truth of the ‘facts on the ground’ and foster initiatives directed toward justice for a land we call holy,” said Katherine Cunningham, co-author of Focus: Palestine. “What is needed is a prophetic, energetic, continuing response on the part of all of us, including the WCRC.”

Responding to the question, “Why should the church be concerned?”, Munther Isaac noted five reasons: 1) there is obvious injustice here in this land, 2) this is happening in the name of the Bible, 3) the church is already involved, 4) as Christians we’re calling out: our presence here is at stake, and 5) finding a just solution in Palestine will inspire other regions in need.

“No change is going to come to the present status unless and until there are loud voices coming from civil society, including faith-based organizations, to demand its end and to demand political and diplomatic leaders place this as one of the more important issues on the international agenda.” said Michael Lynk, United Nations special rapporteur on the human rights situation in the occupied Palestinian Territory.

Speaking as a Palestinian, Muna Nassar said that the ongoing occupation and oppression “is simply a vicious cycle, a witnessed reality that has been passed down from one generation to another.” She noted the importance of employing non-violent forms of resistance, “because violence only begets violence. It is very important for the international world to accept that BDS (Boycott, Divestment, Sanctions) is one of the means that the Palestinian people have chosen to resist, and that it has been used successfully.”

“I am so sorry that the Bible, the same book that I read every day and study every day and means a lot to bring life to many people is bringing pain and suffering to the people of Palestine,” said Dario Barolin, executive secretary of AIPRAL, the WCRC’s regional council in Latin America. “It is very problematic for religions to support injustice. As a Waldensian, we have learned to never use our faith to justify the use of power or oppression.”

“For us, joining the struggle against apartheid on political as well as theological grounds became a question of faith. If you are not in this on the right side, you are betraying the gospel of Jesus Christ. You cannot ignore the suffering and death of Palestinians and then claim to be baptized in the name of Jesus Christ, the forgiver of sins,” said Allan Boesak.

“In Germany, when the church would speak the truth [on the situation in Israel], it would be called antisemitic. The only way to counter that is to make clear that Israel is destroying its own future, which we say together with concerned Jews. We are working toward a future that is only possible with both people together,” said Ulrich Dulchrow.