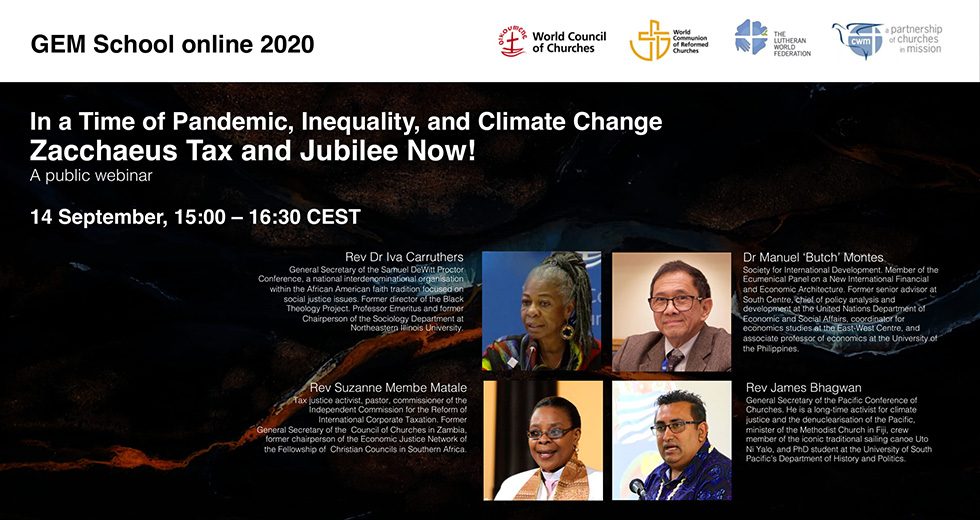 A public online panel discussion—“In a Time of Pandemic, Inequality, and Climate Change: Zacchaeus Tax and Jubilee Now!”—will explore how taxation, reparations, and debt cancellation could contribute to shaping an Economy of Life in a world marked by the COVID-19 pandemic, widening socio-economic inequalities, and a growing climate emergency.

Offered as part of an ongoing series by the Ecumenical School on Governance, Economics and Management (GEM School), the event will offer faith-rooted and gender-just perspectives as well as share concrete proposals as part of the ecumenical ZacTax Campaign. Modelled on the transformative story of Zacchaeus, the ZacTax Campaign advocates for tax justice, including systems which deliver equity and make reparation for exploitation and injustice.

The panel will be held via Zoom on 14 September, from 3:00-4:30 (CET). The public is invited but advance registration is necessary (see below).

The central goal of the ZacTax Campaign is a redistribution of resources towards impoverished communities in order to deliver social and public good. The ZacTax Campaign also calls for measures such as debt cancellation as reparations for enslavement and colonization and for irreversible loss and damage arising from climate change.

“The ZacTax campaign promotes the creation of a system that ensures everyone who is part of an economic system can gain the benefits of the system, not just the few,” said Philip Vinod Peacock, executive secretary for justice and witness of the World Communion of Reformed Churches. “In essence, we’re saying, tax the wealthiest 1%, 2% of their wealth for the sake of the poorest 50%.”

The ZacTax Campaign is a part of the New International Financial and Economic Architecture initiative, a joint project of the Council for World Mission, Lutheran World Federation, World Communion of Reformed Churches, and World Council of Churches.

The goal is to mobilize denominations—which will also involve local congregations—to lobby with their national governments to push for tax reform.

The panel will include the following speakers:

Dr. Manuel ‘Butch’ Montes is from the Philippines and lives in the US. He works with the Society for International Development and is a member of the Ecumenical Panel on a New International Financial and Economic Architecture. Previously, he was senior advisor at South Centre, chief of policy analysis and development at the United Nations Department of Economic and Social Affairs, coordinator for economics studies at the East-West Centre, and associate professor of economics at the University of the Philippines. He holds a Ph.D. in economics from Stanford University.

Rev. Suzanne Membe Matale is from Zambia. She is a tax justice activist, a pastor, and a commissioner of the Independent Commission for the Reform of International Corporate Taxation, a group of global leaders calling for deep-seated changes in the international system of taxation. Previously, she was the general secretary of the Council of Churches in Zambia and served as chairperson of the Economic Justice Network of the Fellowship of Christian Councils in Southern Africa.

Rev. Dr. Iva Carruthers is from the US. She is the general secretary of the Samuel DeWitt Proctor Conference, a national interdenominational organisation within the African American faith tradition focused on social justice issues. Former director of the Black Theology Project, she has a long history of engagement in community development initiatives and social justice ministry. She is professor emeritus and former chairperson of the Sociology Department at Northeastern Illinois University.

Rev. James Bhagwan is from Fiji. He presently serves as the general secretary of the Pacific Conference of Churches. He is a long-time activist for climate justice and the denuclearization of the Pacific, a minister of the Methodist Church in Fiji, a crew member of the iconic traditional sailing canoe Uto Ni Yalo, and a Ph.D. student at the University of South Pacific’s Department of History and Politics.