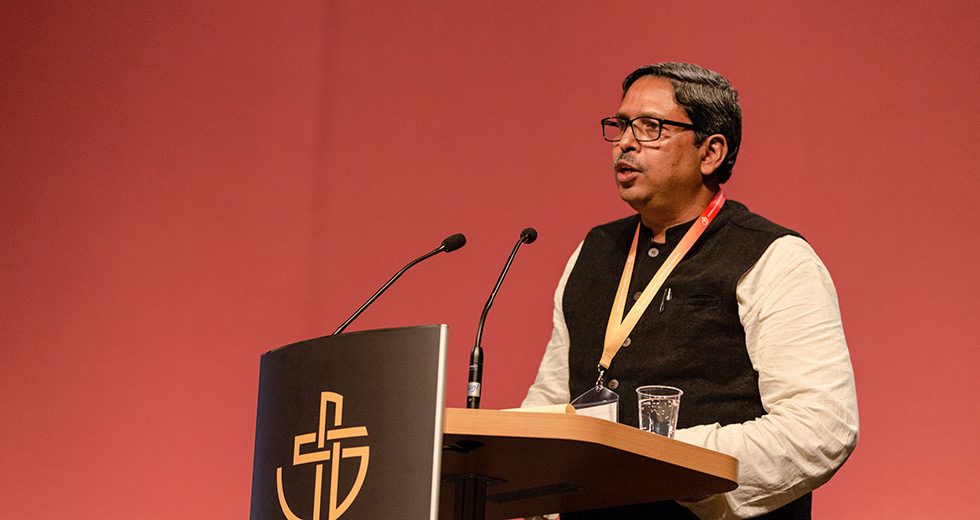 The commemoration of the Protestant Reformation challenges the church to undergo radical renewal and transformation, Indian theologian George Zachariah said in a keynote address to the global assembly of the World Communion of Reformed Churches (WCRC) in Leipzig, Germany.

“Even as we celebrate the 500th anniversary of Reformation, we need to place Reformation in the tradition of all subversive movements in history that tried to critique the distortion of movements into hierarchical and authoritarian institutions,” said Zachariah, on the opening day of the WCRC’s 29 June – 7 July General Council.

The WCRC assembly is taking place in the year that commemorates the 500th anniversary of Martin Luther’s condemnation of church corruption in his 95 Theses, which sparked the Protestant Reformation, alongside the actions of other Reformers such as John Calvin in Geneva.

“Reformation is the divine project of making all things new, and we are called to participate in this mission in our times,” said Zachariah.

“The vocation of the Reformed Church is not to romanticize the past and to live in the present, glorifying the past; rather our vocation is to reclaim the subversive faith inherent in our tradition, by putting the spirit of ‘protest’ back in our tradition, theology, faith practices, and public witness,” he continued.

“Here the voices of the unheard are the signs of the time that should lead us and inform us in our public witness,” Zachariah said in his presentation at the WCRC assembly which is gathering about 1000 participants in the eastern German city under the theme “Living God, Renew and Transform Us.”

The church remains “a centralized, hierarchical power structure without sufficient commitment to the virtues of democracy, transparency and accountability,” stated Zachariah, a professor in the department of theology and ethics of the United Theological College, in Bangalore, India.

“Church reformed is a church in need of continuous reformation,” he said. “Our theological formulations continue to remain elitist and racist, and our biblical reflections and liturgical practices are not sufficiently capable to inspire and inform the congregations in their discipleship journey to bring about healing and restoration in our communities.”

In his address, Zachariah referred to the 1934 Barmen declaration of the Confessing Church in Nazi Germany which denounced the incursions of National Socialism in church life.

“A renewed and transformed church is called to be a witnessing presence in the public sphere, and hence it is a public church,” said Zachariah. “Particularly in the context of rising fascism, cultural nationalism and exceptionalism we need to draw inspiration from the Barmen declaration and become confessing churches in our respective contexts.”

Responding to Zachariah’s presentation, Dutch theologian Janneke Stegeman warned against “a Eurocentrism that continues to see Europe as the only possible source of freedom, democracy and truth.”

Today, she said, “voices from the margins, rather than my voice that comes from the centre, is what we need to pay attention to … These voices are the voices that are able to confront power, to make visible where people and earth are being violated.”

← Newly commissioned Psalm part of the commemoration of the General Council in Leipzig
Faith has a duty to promote reconciliation, says German president →