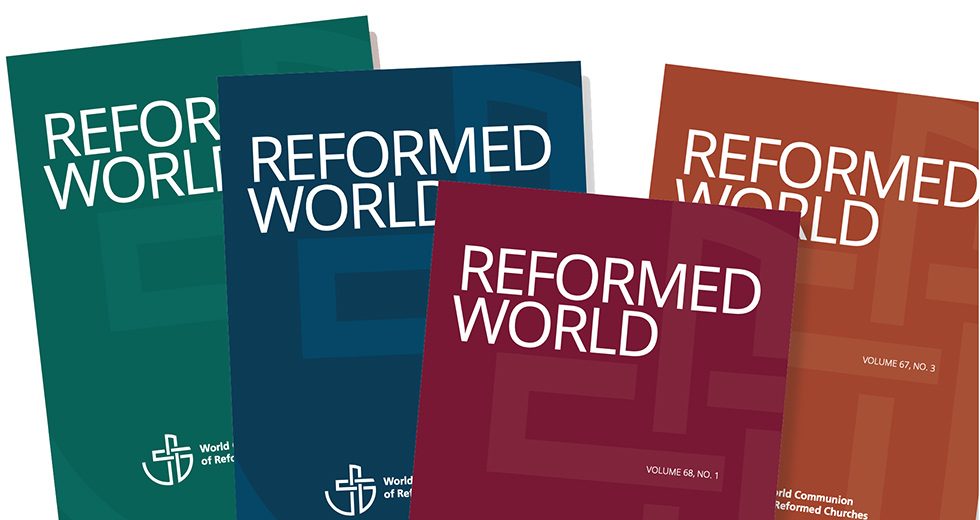 After a longer than expected hiatus, Reformed World, the World Communion of Reformed Churches (WCRC) theological journal, has returned with a pair of editions released simultaneously.

During the two years between the last issue and now the editorial board was reconstituted and the journal’s “aim and scope” updated:

Reformed World is an international journal that provides a forum for sharing and debating theological studies and prophetic witness that seek to engage and transform the realities of our time. The journal draws on, widens, and deepens the treasures of Reformed sources, past and present. Reformed World purposefully and joyfully embodies a diversity of voices and contextual perspectives, inspired by ecclesial, academic, and grassroots communities. In the understanding of Reformed World, theological studies include the biblical, historical, systematic, and practical, as well as reflections on visual art, music, poetry, and other expressions of the human mind and soul that aim at the transformation of the world.

In doing so, Reformed World is committed to the mission of the World Communion of Reformed Churches (WCRC) to be a global koinonia, covenanting for justice, and marked by discerning, confessing, witnessing, and being reformed together. The journal also strives to receive impulses from and give impulses to the wider ecumenical movement, working together with all the partners God provides.

“This has been a lengthy but important process, as we took the time needed to reset the mission of journal to better serve the entire Communion,” said Hanns Lessing, WCRC executive secretary for communion and theology and Reformed World editor. “We were also pleased to bring together a board of eminent international theologians to serve together.”

The first of the two editions—volume 69, issue 1—features the most recent ecumenical dialogues between the WCRC and three other Christian communions: the Roman Catholic Church, the Anglican Communion, and the Pentecostal World Fellowship.

The edition—the production, printing, and distribution of which was supported by a generous grant from the Protestant Church in Switzerland—not only includes the full reports from each of these dialogues but accompanying essays which place the dialogues in context and explore various aspects of each. The issue also reflects on the history of Reformed World.

The second of the two editions for 2021—volume 69, issue 2—is a festschrift in honor of outgoing General Secretary Chris Ferguson.

“We hope that the papers published in this issue will challenge and encourage the commitment of Reformed churches to communion, justice, and mission as we celebrate the contribution and legacy of Chris Ferguson,” noted co-editors Jooseop Keum, Philip Vinod Peacock, and Lessing in their introductory editorial.

Reformed World is published twice yearly by the WCRC. Complimentary copies are sent to leaders of WCRC member churches, along with many others. Paid subscriptions will be again accepted in the near future. Issues may also be freely downloaded from the WCRC website’s Reformed World webpage.