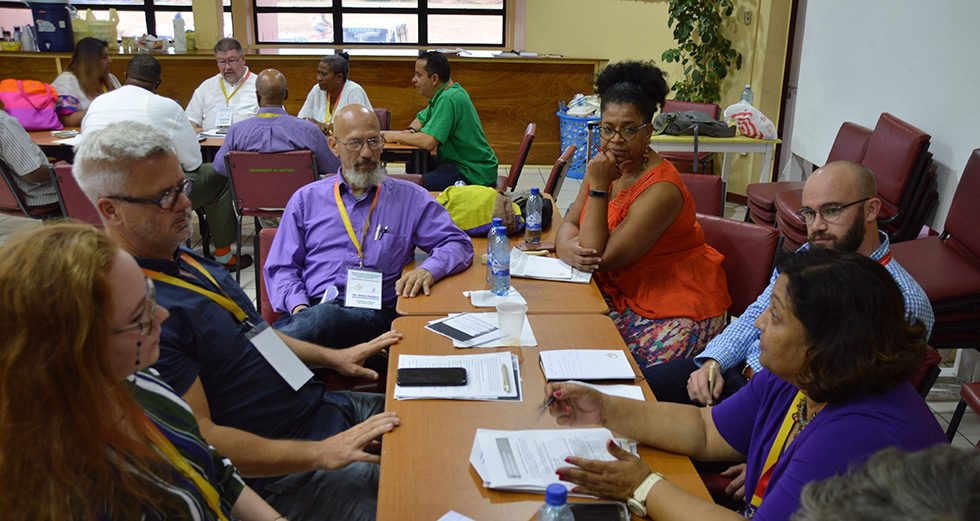 Relationships—both the personal and corporate—are the foundation from which the Caribbean and North American Area Council (CANAAC) will build over the next years. CANAAC met as an Assembly in Georgetown, Guyana, 25-30 October, under the theme “Living Faithfully, Building Relationships.”

“The Assembly was a truly special time for all of us. A time of spiritual awakening, a time of life-giving worship, a time of listening and reflection,” said Angela Martins (United Church in Jamaica and the Cayman Islands), who was elected convener. “The biggest accomplishment of the Assembly was the quality of fellowship and the resulting relationships which have emerged.”

Assembly delegates learned about the Guyanese context through four immersion experiences: Red Thread (women’s advocacy), Plastic City (economic justice), Society Against Sexual Orientation Discrimination and the Mangrove Restoration Project. A public forum deepened their understanding of economic, ecological and human rights issues in Guyana, and they also worshiped with a variety of member congregations on the Sunday.

An introduction to the WCRC’s strategic plan and four themed plenaries—human sexuality, racism in church and society, the Accra Confession and “From Despair to Hope”—provided additional information and a space for discussion and discernment about the priorities and projects for CANAAC in the coming years.

“CANAAC must become a steady force in support of its members, serving as a voice of reason, able to speak truth to power in its own way,” Martins said. “The strength of CANAAC has not been realized. It is through strengthening relationships and the shared dialogue that CANAAC will find its place as a source of strength and possibility across the Caribbean and North America’s Reformed faith community.”

The Assembly produced a message to the member churches of CANAAC, agreed on a draft set of goals and elected a six-person steering committee along with three officers: Martins as convener, Colin Watson (Christian Reformed Church in North America) as deputy convener and Gail Allan (United Church of Canada) as financial secretary.