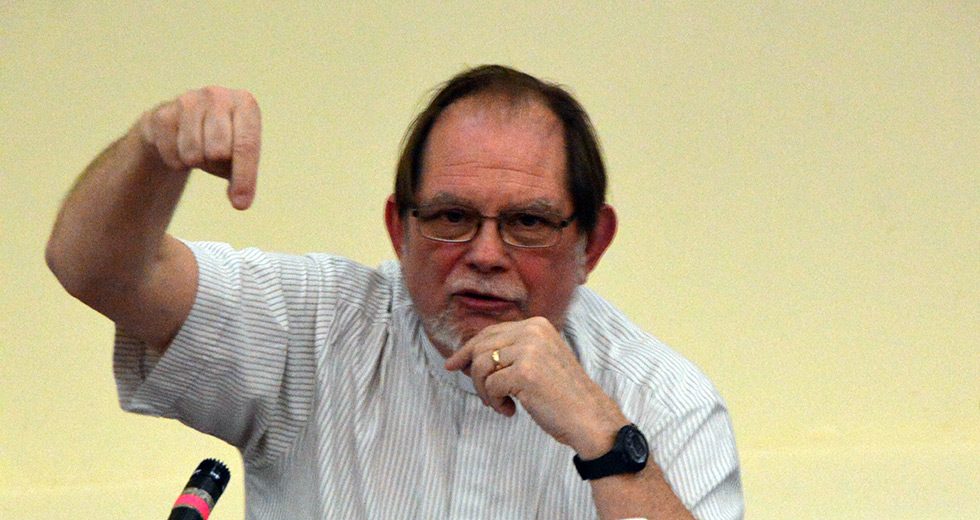 Chris Ferguson, the general secretary of the World Communion of Reformed Churches (WCRC), pointed the organization toward a strategically busy year leading to the 2017 General Council in his report to the executive committee.

“We are, despite considerable challenges, moving forward with renewed vigour on many fronts,” Ferguson said. “The council’s theme of renewal and transformation has inspired us not to conform but to turn around and renew ourselves for our mission.”

Ferguson noted that the WCRC’s work has been directed by a strategic plan based on the recommendations of the 2010 Uniting General Council and adopted by the executive committee in 2011. The plan places a strategic emphasis on five key directions for the work and witness of the WCRC: mission, communion, justice, theology and ecumenical engagement.

“In this final phase of the strategic plan there is the opportunity to report our successes, shortcomings and learnings to the 2017 General Council,” said Ferguson. “We can prepare for the council with a focused proposal for the vision of the WCRC for the next period in order to inspire, mobilize, strengthen and lift up the mission of the member churches and the Communion as a whole on all levels for the renewal of the churches to contribute ecumenically, inter-religiously and with the wider global civil society for the transformation of the world in response to the call of the living God.”

Ferguson brought forward specific proposals to tackle in each of the key directions:

Mission: A “Mission on the Frontlines” conference in the context of religion, violence and peace-building will be held with special attention to supporting Middle Eastern and African churches.

Communion: The WCRC will convene a consultation on communion and human sexuality to provide an opportunity and the safe space to explore in mutual respect how the WCRC can ensure that we maintain and deepen unity in the face of differences while drawing on the gifts and theological and biblical perspectives of the Reformed tradition.

Justice: the New International Financial and Economic Architecture (NIFEA) initiative is being re-launched through a number of activities. In gender justice the focus will include the full participation of women in the ministry and leadership of the church with a special report from a task group on the ordination of women.

Theology: A consultation with member churches concerning WCRC association with the Joint Declaration on the Doctrine of Justification is already underway and will include articulating the WCRC contribution through a signing statement on “justice and justification.” In addition work is being done with the Lutheran World Federation to make a significant contribution towards Lutheran-Reformed communion through a joint declaration.

Ecumenical Engagement: Special attention will be given to public witness and advocacy issues that are important to members of the Communion, including in Colombia, the Middle East, South Sudan and the Korean peninsula. Close collaboration with the wider ecumenical movement, including the World Council of Churches, will be a key part of this area.

“The Communion is alive and active,” Ferguson concluded. “Thanks be to God we have witnessed great demonstrations of unity, solidarity, love, service, prayer and compassion among us. We also see real threats to unity and to our Communion itself. We are being constantly called forward to greater unity, greater ecumenical engagement and greater public witness and transformation for justice for the glory of God.”

The executive committee is meeting in Havana, Cuba, 7-13 May 2016, hosted by the Presbyterian Reformed Church in Cuba.