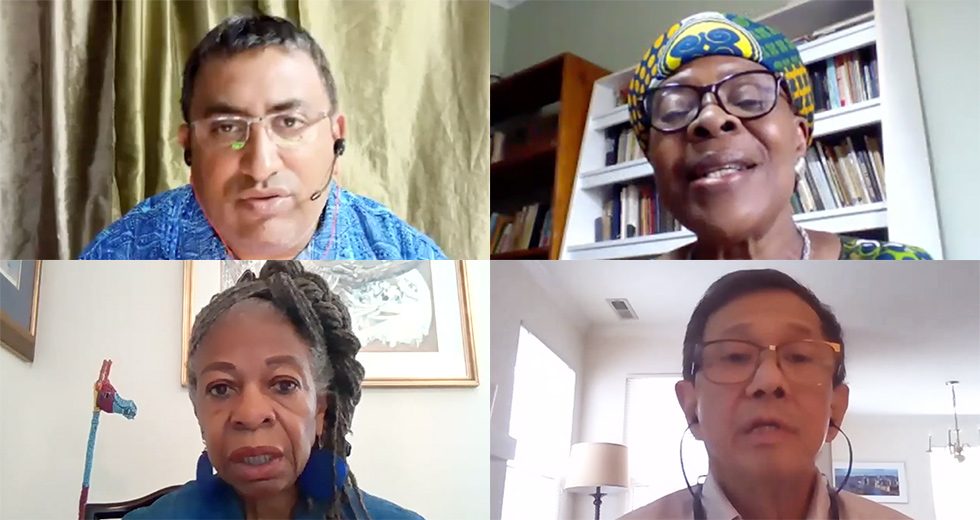 Tax justice, including reforming the current tax systems, enacting jubilee, and paying reparations, was the focus of the second 2020 Ecumenical School on Governance, Economics, and Management (GEM School) public webinar.

Students and guests were introduced to the Zacchaeus Tax Campaign (#ZacTax), which calls for “a transformation in the global economic system that would, like Zacchaeus, return at least some of the monies owed” by multinational corporations and the extremely wealthy, said Justin Thacker, director of Church Action for Justice (UK). “More than ever we want to see a fairer world, a more just world, a more equal world, a world where the rich and powerful stop exploiting—and, indeed, stealing—from the poor.”

“The story of Zacchaeus unravels the delinquency of the global taxation system in its current form. It is oppressive and sinful. The world needs to listen to this story, not only because it’s a Christian story but because it strongly speaks truth to power,” said Suzanne Matale, commissioner of the Independent Commission for the Reform of International Corporate Taxation.

“We are living in a world that high inequality is feeding higher inequality. The world’s richest 1% have more than twice as much wealth as 6.9 billion people,” said Manuel “Butch” Montez, of the Society for International Development. “This is strengthened by complex tax structures that make it completely legal for the rich and the corporations to move money out of reach of tax authorities.”

Tax reforms, including financial transaction taxes, wealth tax, carbon and pollution taxes, and surcharges on illicit financial movements are necessary, he argued. “We must study the issues around just taxation and reparation for slavery and ecological debt through the lens of the covenantal relationship that God calls us into with each other and the earth.”

“Reparations is a process to remember, repair, restore, rejoin, replenish, set right, make amends, and reconcile,” said Iva Carruthers, general secretary of the Samuel DeWitt Proctor Conference. “Always, true reparations is a matter of justice. Reparations can never be singularly reducible to monetary terms. To do so makes a mockery of the real significance of reparations as an end in a process of distributive justice, human atonement, and redemption.”

“In Christian terms, confession, contrition, restoration, and reconciliation are the stages to reparatory justice, forgiveness, ultimate atonement, and peace with God,” she said. “Healing begins with remembering; the spirit of true reconciliation and human justice begins with truth. The first step in the process of reparations is confession. The last step is reconciliation.”

Considering the concept of jubilee, James Bhagwan, general secretary of the Pacific Conference of Churches, noted that biblical jubilee includes “both freeing of the people and freeing of the land. We’ve seen globally, in the very early days of COVID-19, the respite that the lands and oceans and air received from the lockdowns. It showed what’s possible if the land received a jubilee.”

“The [economic] model in the Pacific is based on domination and extraction. In the Pacific we as churches, academic organizations, and Indigenous communities are working to establish an ecological framework for development, asking ‘What would look like if it were based on well-being, on leaving things intact rather than extracting them?’” he said.

Addressing the role of churches in the ZacTax Campaign Carruthers said, “We must move into a commitment and covenant to struggle with the truth. First thing, there should be a confession. From that and a truth telling, they have to look at their local contexts to see what role they have played in supporting this system of inequality and racism. It also requires prophetic leadership and courage, to speak truth and help people understand their own sense of humanity would be served by their willingness to engage in this difficult work.”

“The Zacchaeus story is a wonderful resource we can utilize to raise our voices; put together it demands a strong voice: stop this sin of stealing our resources!” said Matale. “We the faith people must feel the pain of poverty and inequality. We have a duty of care for others. We need to arise and assure change so that God can be given the glory he deserves.”

The next GEM School public webinar will be on interfaith perspectives on just finance, debts, and reparations and will be held on Friday, 2 October.

The ZacTax Campaign is a part of the New International Financial and Economic Architecture initiative, a joint project of the Council for World Mission, Lutheran World Federation, World Communion of Reformed Churches, and World Council of Churches.

The GEM School is also a joint initiative of these ecumenical organizations. It aims to build economic literacy within churches by equipping participants with the tools and languages to effectively advocate for urgent transformations in the global financial and economic realm.