Terence Corkin brings discernment processes to the WCRC in Leipzig 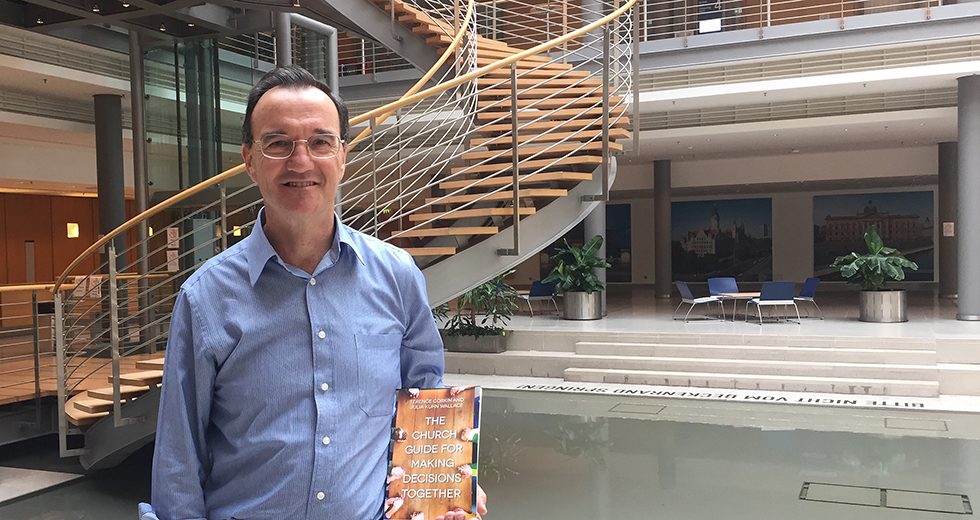 Terence Corkin, ordained minister of the Uniting Church in Australia (UCA) and a discernment facilitator and coach, arrived at the WCRC General Council in Leipzig with a new book in hand: The Church Guide for Making Decisions Together.

The book, which was released in May 2017, offers a realistic look at the challenges of building consensus in a diverse church body. More importantly, the book offers practical guidance on how to bring about consensus-based decision-making.

There are five foundations for discernment procedures according to Corkin and his co-author, Julia Kuhn Wallace, beginning with a sense of community and a collective commitment to a common cause. A shared foundation in Christianity helps to counter these hurdles in organizations such as the WCRC. Believers understand that fellow decision-makers are family members in Christ with the common goal of discerning God’s will.

However, in a setting such as the WCRC’s General Council new challenges arise from the group’s great diversity. Reformed church members from 6 continents are gathered in Leipzig, speaking dozens of languages and approaching the world from many different perspectives.

“There’s no question that the more diverse the community, the more different their experiences, the more difficult the discernment process becomes,” said Corkin. Diverse groups lack a shared history. Relationships between members are limited. Add to those issues the challenges of different languages and cultures and civil decision-making can seem insurmountable. It is through the constant reminder that God is with us that community—and consensus—can be found.

Corkin also believes that theological differences can create unique challenges to Christian communities. Organizations such as that of the WCRC enjoy a tradition of believing that members are more likely to make good, divinely-inspired decisions in community. But that isn’t necessarily the case in religious groups where decision-making rests with a hierarchy or a single anointed person.

“This doesn’t mean that consensus can’t happen in these settings,” said Corkin. “A consensus-based approach can still be helpful and can be used to explore issues.”

“We celebrate here in Germany in 2017 the 500th anniversary of the Reformation,” said Corkin. “This is a good time to pause and remember what we learned from the Reformation: that God gifted many people to lead the church together.” Corkin believes that The Church Guide for Making Decisions Together can serve as a good toolkit for helping church bodies make those consensus-based decisions here in Leipzig and beyond, today and in the months to come.

“And it’s important that we do so,” Corkin added. “We can bear witness to our Christian faith and life by showing the world that we know how to build consensus.”

The Church Guide for Making Decisions Together was coauthored by Terence Corkin and Julia Kuhn Wallace. The book makes its international launch at the WCRC General Council in Leipzig and is available for purchase at www.MakingChurchDecisions.com and www.amazon.com.