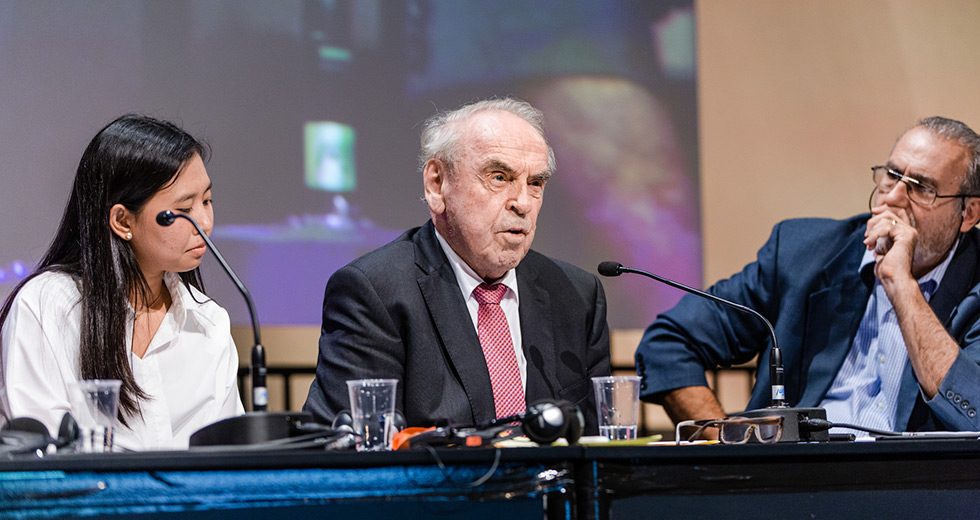 Without a vision for the future, new scientific and technological possibilities will be used for the death and destruction of humanity, according to German theologian Jürgen Moltmann, speaking at a global assembly of Reformed churches.

“’Fullness of life’ is that kind of vision of the future, reaching far beyond what is possible here—into eternal life,” Moltmann told the General Council of the World Communion of Reformed Churches (WCRC), meeting in Leipzig, Germany, from 29 June to 7 July.

Almost 50 years after first addressing a global gathering of the World Alliance of Reformed Churches—a forerunner of the WCRC—in Nairobi, Kenya, in 1970, Moltmann spoke in Leipzig of his confidence in the “living God” who brings life in the face of “gods of death,” creates joy in the face of atheism, and offers fullness of life as a vision for the future.

As examples of “gods of death”, Moltmann pointed to racism, war, nationalism, capitalism promising wealth and producing poverty, and the terror from below of “suicidal mass murderers” motivated by a “religion of death.”

Now 91, Moltmann—a Reformed theologian—first came to prominence with the publication of his ground breaking Theology of Hope in 1964. This set out how hope for the still unachieved future in the light of God’s promises leads to continually new impulses toward righteousness, freedom and humanity in the present-day world.

Since then, his theological writings have covered issues such as creation and ecology, the insights of liberation and feminist theology and the work of the Holy Spirit.

“The cry for justice always comes too late, when violence and wrongdoing make the life of vulnerable people difficult; but it has to come,” said Moltmann, who was honoured in Leipzig by WCRC general secretary Chris Ferguson for his lifetime contribution to Reformed theology.

“We will therefore become seekers of possibilities of life and justice, and will avoid the recognizable options of death and annihilation,” said Moltmann in his address in which he denounced increasing inequality in societies.

“All peoples suffer today from social impoverishment and are crying for social justice,” he said. Democracy is not founded only on the freedom of citizens, said Moltmann, but also on their equality.

“The democratic idea of equality is incompatible with an economic system that produces ever greater inequality among peoples,” he continued.

He praised the WCRC for its 2004 Accra Confession which called for a faith commitment in the face of economic injustice and ecological destruction.

In the statement, “the ‘God of capitalism’ is met with the confession of the living God,” Moltmann said, “and the call for justice for the poor and the Earth is raised globally in addressing economic and financial ‘globalization’.”

Yet he warned that a concern for the victims of injustice was lacking at the centre of Reformation theology. “We pray ‘forgive us our sins,’ but where are the victims of our sinful action?” Moltmann asked. “The first issue is not the penitence of the perpetrators but the pain of the victims,” he said.

← Faith has a duty to promote reconciliation, says German president
For two Syrian sisters, the General Council offers an opportunity to speak of difficulty…and hope →