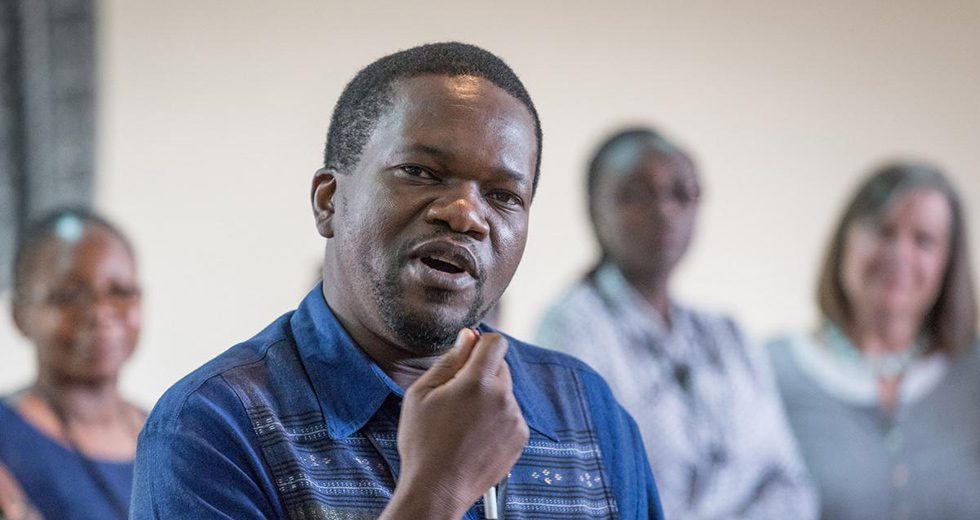 The COVID-19 pandemic can become a “kairos” moment of opportunity for men to repent of the sin of patriarchy and create positive partnerships that empower women and men. Churches should be in the front line of this process, drawing on Scripture and other faith resources to advance gender equality.

That was the theme of a third Transforming Masculinities webinar which took place on Ash Wednesday, 17 February, featuring Ezra Chitando from the University of Zimbabwe, coordinator of the World Council of Churches program on Ecumenical HIV and AIDS initiatives and advocacy.

The webinar series is part of an ongoing process pioneered by the Lutheran World Federation (LWF), the World Communion of Reformed Churches (WCRC), ACT Alliance, and the South Africa based Sonke Gender Justice network. Its goal is to work with faith leaders and train regional practitioners to facilitate spaces of dialogue, root out gender violence and engage men and boys in the task of promoting gender justice.

Repenting of the sin of patriarchy

Chitando began by noting that “patriarchy promised a lot for boys and men,” but “we, who are supposed to be the beneficiaries, are also the victims of patriarchy.” As a result of the way in which boys are socialized “to dominate and control” others, he said, men are often unable to express vulnerability, to listen to women, to cooperate with them or to apologize for their own mistakes.

It is vital to work within families and faith communities, he said, to change the narrative, to promote cooperation with women’s movements and to invest “with urgency” in the training of young boys and girls. This season of Lent, he said, is an appropriate time to call men—as Jesus called Zaccheus—to “come down immediately” from their position of privilege, to repent and offer restitution to those who have been harmed.

Among those joining Chitando in the conversation was Chad Rimmer LWF’s program executive for identity, communion and formation, who said “our faith traditions have the resources to resist negative narratives and ‘restory’ what it means to be a man.” He suggested this time of global pandemic could be an opportunity for transformation and progress towards greater gender equality. Men, who traditionally see themselves as the breadwinners, have been confined to their homes in a move that has “relativized the power of the patriarchy,” panelists agreed. How can churches support this confinement and combat the rise in domestic violence, they asked?

Churches must lead movement for change

Another participant was Bafana Khumalo, co-founder and director of Strategic Partnerships for the Sonke network. He spoke of the reasons why many men resist gender justice work, citing the way they may feel emasculated by the feminist movement and noting that they too can be victims of violence and discrimination. Making comparisons with criticism of the Black Lives Matter movement, Chitando noted that the “system of privilege quickly moves into self-protective gear.” “Let us not compete for trauma,” he said, adding that “magnified victimhood is a patriarchal construct to allow for not coming to the conversation table.”

Philip Vinod Peacock, the WCRC’s executive secretary for justice and witness, spoke of the vital role that churches can play in transforming toxic masculinity through liturgy, preaching, teaching and reading of Scripture. “The church is the last boys’ club,” he said, but “we should be leading way and not lagging behind.” Contextual bible studies and “increasing faith literacy,” he insisted, are vital ways of moving the needle towards greater justice and equality.

Participants watched a short film entitled The Gift of Fatherhood about two brothers living in a huge township in South Africa, where more than half of all children grow up without a father in the home. The film, featured on the MenCare website, highlights the importance of providing safe spaces for men to share feelings, encounter positive role models, and learn non-violent coping strategies.

Panelists emphasized the importance of challenging “cultural norms” and working with traditional leaders to stop violence against women. “We need to engage,” and not “push away or let off the hook those who don’t agree with us,” Khumalo said. He cited projects in Zimbabwe and Tanzania where traditional leaders have attended workshops on women’s empowerment and have become “champions of equality calling for the end of child marriages and female genital mutilation.”

Just as “Jesus showed Zaccheus how to become part of the solution for change,” Khumalo said, so people of faith must “move out of our comfort zones” and confess the way churches have excluded and discriminated against women. The ability to “reconfigure our gender narratives” to promote justice and inclusion, panelists concluded, is a mark “upon which our faith stands or falls.”