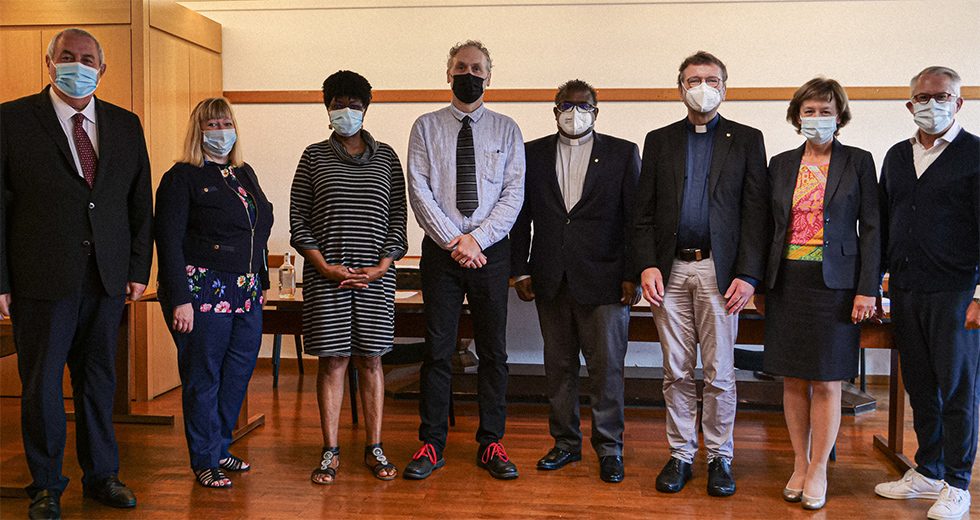 A delegation composed of the “collegial general secretariat” of the World Communion of Reformed Churches (WCRC) visited the Ecumenical Centre in Geneva on 17 September to discuss with World Council of Churches (WCC) leadership how to strengthen ties between the two organizations by connecting programmatically.

The delegation heard overviews of the Green Village, Spiritual Life, Public Witness and Diakonia, Overcoming Racism, and communication efforts in the midst of the pandemic, among many other programmes.

“The joy of collaboration gives us hope and helps us stand more strongly together in the face of the grave challenges of the world today,” said Ioan Sauca, WCC acting general secretary. “The best way to counter division is to share our vulheraibitiy and solidarity in a genuine way.”

The WCRC presented the direction of its work with a theme of “Four Verbs: Discerning, Confessing, Witnessing, Being Reformed Together.”

The group particularly discussed the important role of advocacy and the prophetic voice for justice in the midst of the pandemic, agreeing that the wider ecumenical movement needs to coordinate and collaborate much more to get more attention to the most vulnerable people and stand up for injustice anywhere in the world.

“The ecumenical work and collaboration on advocacy—raising a voice together with those needing accompaniment for justice and peace—is a genuine task for a fellowship of churches who together express faith in the triune God of life,” said Philip Vinod Peacock, WCRC acting general secretary for programmes.

The “collegial general secretariat” is composed of the three WCRC executive secretaries, collectively providing leadership to the Communion during an interim period.