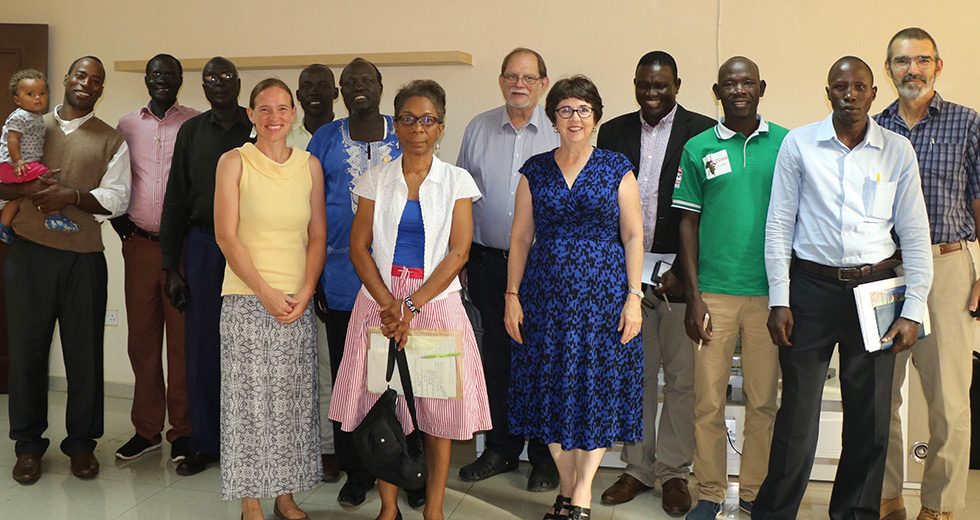 Chris Ferguson, general secretary of the World Communion of Reformed Churches, witnessed first hand how the church is alive and active in the midst of turbulence and crisis during a recent trip to South Sudan.

The PC(USA) works in partnership with the PCOSS, a WCRC member, and the SSPEC, a young church considering applying for membership in the WCRC.

Three different ethnic groups reside in Mahad, an IDP camp of over 7500 people outside of Juba. The camp administrator explained that in the camp the people are laughing together, while outside the camp in distant places, the same ethnic groups are fighting one another. The reason he gave that these people could live peacefully together in the camp was the power of the Word of God.

After touring the camp the delegation met with church elders from the PCOSS who currently live in the camp. An elder gave greetings, saying, “Even though we are living in a hard situation here in Juba, God who created us did not leave us. As Paul put it, even though all our body is suffering, but with the Holy Spirit, God will renew our spirit.”

“We understand that in most places the people that God has placed to do ministry in the very local level are the best people to lead us to peace,” said Ferguson. “You are the ones who can lead us.”

“We need the church to be empowered,” a PCOSS pastor responded. “Church leaders, women and youth, need to be empowered to advocate for the peace initiatives in South Sudan. The church has already started it, they have done a lot for peace, especially at the grassroots, at that level, they can play their role.” 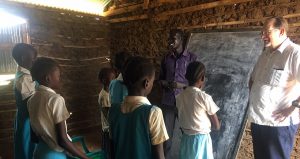 The Akatgol Presbyterian Church Primary School, in the Jebel area of Juba, was founded in 2011 in response to an influx of refugees. The Murle-speaking Akatgol PCOSS church community sought to provide spiritual, emotional and educational support to the 11,000 new arrivals to the area, many of whom were orphaned children.

The current enrolment is 150 (one third of whom are female) in nursery through grade 5 and grade 8. The enrolment is down from its high of 300 due to difficulties in paying school fees, the movement of populations to refugee camps in Kenya and Uganda and additional challenges for the school. The student population is made up of Murle, Dinka, Nuer, and Central, Eastern and Western Equatorians. In 2014, the school’s medium of instruction changed from the Murle language to English as parents from other language groups saw the quality of the education and wanted to enroll their children.

“This school is considered a ministry of the church,” the acting headteacher told the delegation. “Every day we and the children are faced with trauma, but we are able to counsel children after training, though we could use more support.”

Peace building and education are top priorities for the PCOSS said John Yor, PCOSS general secretary, in a meeting with the delegation and members of the PCOSS education department and two ecumenical, South Sudanese partners, Across and RECONCILE International.

These organizations work together in South Sudan education and peacebuilding projects to strengthen the PCOSS education system by training teachers, mobilizing communities to support education, constructing schools and building a peaceful environment in which students can thrive.

In South Sudan, 87% of teachers are not trained, only 10% of children complete primary school, and girls drop out of school more than in any other place in the world. In the midst of incredible challenges, church partners in South Sudan labour tirelessly to change these heartbreaking statistics.

The deeply committed sisters and brothers were greatly encouraged by Ferguson’s presence with them, which served as a reminder that the global church has not forgotten the children of South Sudan.

Nile Theological College (NTC) was founded in 1991 in Khartoum, the capital of Sudan, and established a second campus in Malakal, South Sudan, in 2011.

Malakal, being strategically located on the Nile River, was a contested city during South Sudan’s civil war, which broke out in 2013. Much of the city was destroyed including the young college. Miraculously, 80% of the books of the institution were spared and housed by a local politician until Santino Odong, the college principal, was able to arrange transport of the books to the college’s new location in Juba, South Sudan’s capital. 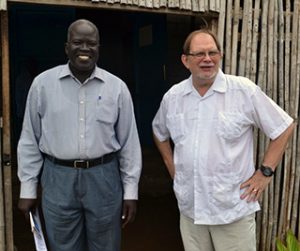 Since moving to Juba in 2014, NTC has grown from five students to more than 70. One out of seven of these students currently live in IDP camps in or near Juba, and a strong majority of the students have been displaced from all over the country. Due to the compromised security situation in South Sudan, all of the families of the leadership of the institution live in other countries such as Egypt, Sudan and Uganda.

As this issue of displacement was discussed, Ferguson drew attention to Reformers such as John Calvin and John Knox who were themselves displaced from their homes of origin due to the political and religious upheaval of their times. Thus, much of Reformed thought and thinking germinated during a period of great national and international political and religious turmoil. Calvin even insisted to the city council of Geneva that they set a precedent for being a place which would welcome refugees.

The theme stressed by Ferguson in this discussion—God’s providence and sovereignty in the midst of turbulent times—felt not only like an important theological insight, but served as a means of pastoral care for these South Sudanese leaders who persevere in their service in the face of the multitudinous challenges in this war-torn nation.

Sharon Kandel, PC(USA) mission co-worker, described NTC as “a place of joy and hope.” Indeed, in the midst of the turbulence which has been endemic to this region for generations, NTC shines as a brilliant light to the goodness, faithfulness and glory of God. For the leadership of NTC and for those of us connected to this institution, it is always a welcome reminder to know that we belong to a worldwide community of faith who upholds us in prayer and encourages us as we press forward in faith, she said.

With its roots in the Sudan Presbyterian Evangelical Church based in Khartoum, the SSPEC was established as a separate denomination in 2011 when South Sudan was created as an independent country, said Madut Tong, deputy general secretary of SSPEC. Currently, the young church has about 30 congregations, but because of the ongoing conflict many of those congregations are in IDP camps or comprised of people displaced from their home regions. Because of the instability and crisis in the country, the focus has been on planting churches and obtaining a basic building to worship in. Pastors and church leaders are bi-vocational—all of them have taken on jobs outside the church to support their families.

Ferguson shared experiences from some other churches in regions of conflict and encouraged the SSPEC leaders, saying that sometimes conflict and crisis provide a chance to re-evaluate systems and make changes.

Philip Akway, general secretary for SSPEC, said that their vision is to combine education with vocational skills to further build people’s capacity and ability to thrive in ministry.

Ferguson encouraged the church with this vision, and said that sometimes the church is a person’s only opportunity for education, and that the training provided can increase the capacity of the community as a whole.

There was also much discussion about doing such training with other Reformed partners, considering the current conflict-ridden situation that has made resources scarce.

“Women have been included as a key organ in the church,” shared Achol Majok, chairwoman of the SSPEC’s women’s desk. Women are active in the church, but because of the crisis in the country their activities are currently focused on promoting peace. Women of several congregations gather in monthly prayer gatherings and hold marches to promote peace.

Several members have been trained in trauma healing and reconciliation at the RECONCILE Peace Institute, and workshops have been held to promote healing. Achol is keen on women being involved in the process when the church’s constitution is reviewed and translated from Arabic into English.

The delegation visited the Jebel Market Congregation, which was proud to show off their newly constructed building with shiny red iron roof sheets and fresh-caked mud walls. Support for the roof sheets was given from the Presbyterian Church (USA) and the Booth Foundation. The church, established in 2006, had been worshipping under tarps for three years since their temporary building collapsed in 2015. Most of the members live in an IDP camp at the edge of town and often are not able to make it to church because of lack of transport. The congregation worships in the Nuer language, one of several languages used in SSPEC congregations.

The leadership of SSPEC was encouraged to hear about examples of ecumenical efforts that the WCRC has facilitated. Ferguson emphasized that the strength of the WCRC is leveraging the experience and skills of churches to partner together to benefit each other. SSPEC is interested in exploring membership in the WCRC and to benefit from the experiences and connections with other churches in areas of conflict, crisis and displacement.

South Sudan is one of the areas of the world in which the WCRC is focusing its efforts to promote peace, justice and reconciliation. Other areas are Colombia, the Korean peninsula and the Middle East.

Thanks to the following PC(USA) mission co-workers who contributed to this article: Leisa Wagstaff, Nancy Smith-Mather, Kristi Rice, Bob Rice.