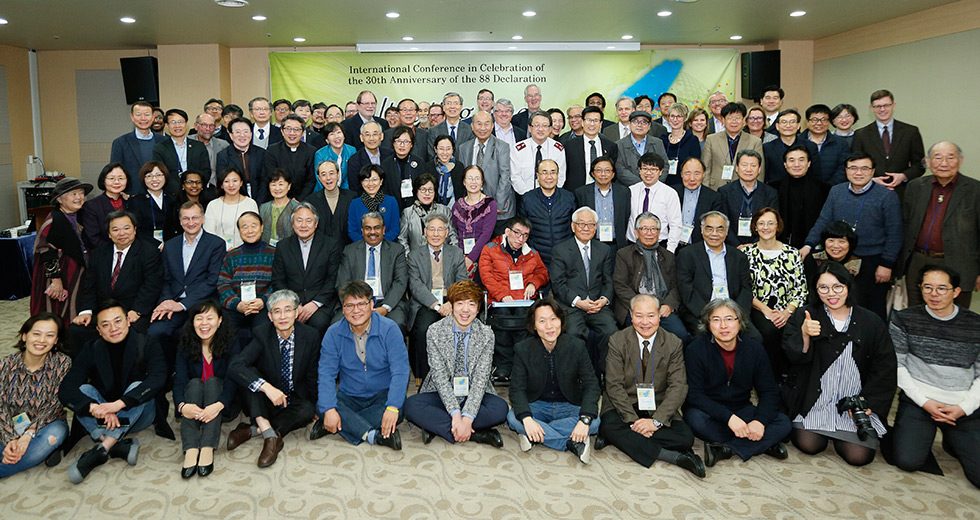 The World Communion of Reformed Churches (WCRC) welcomes the important steps toward peace on the Korean peninsula that have been made this week.

Even as political progress for potential peace was happening, an international group of ecumenical leaders was gathered in Seoul for a conference to mark the 30th anniversary of the “1988 Declaration of the Churches of Korea on National Reunification and Peace.”

The WCRC was represented by General Secretary Chris Ferguson, while many member churches also sent participants. The National Council of Churches in Korea (NCCK) hosted the event, and its general secretary, Hong Jung Lee, is a member of the WCRC Executive Committee.

The Korean peninsula is one of several areas of focus for the WCRC in its Global Peace Initiatives programme, and the WCRC Executive Committee will hold its 2018 meeting in Seoul in May.

Participants at the conference issued a statement about the meeting which follows below. The “Action Plan” noted in the document will be available soon.

“For he is our peace; in his flesh he has made both groups into one and has broken down the dividing wall, that is, the hostility between us.” (Ephesians 2:14)

God’s vision for this world sees swords being beaten into ploughshares (Isaiah 2:4), nations gathering together under the light of God’s justice and peace, sisters and brothers once in conflict embracing each other, and all God’s children fearing neither hunger, nor thirst nor threats of war. So long as nations practice invading each other, developing bombs and missiles to destroy each other, and refusing to sit at the table until unrealistic conditions are met then we move further away from God’s vision for our world. We invite Christians around the world and all people of good will to join us as we walk the path of peace with our God proclaiming the promise that God will one day redeem this whole creation.

We have gathered as Christian leaders from around the world together with Korean Christian leaders to reflect upon the significance of the 1988 Declaration of the Churches of Korea on National Reunification and Peace and its implications for our lives and actions in today’s context. After a period of explosively escalating tensions, we have welcomed the PyeongChang Olympic Truce and the new steps towards dialogue between North (DPRK) and South (ROK) as an historic opportunity.

In particular, we have been blessed to be meeting during the very days of the most hopeful developments for peace in the region for many years, with the South Korean delegation visit to Pyongyang on 6 March – the first high-level direct talks between the two Koreas in more than a decade – and the announced commitment to a peace summit in April 2018. We give joyful thanks to God for these developments. We especially welcome the reported commitment by the DPRK leadership to suspend its nuclear weapons development programme in order to enable dialogue to take place, and the indication that the DPRK sees no need to retain nuclear weapons if military threats against the DPRK and its regime abate. We recognize that these indications do not mean that a sustainable peace has been or will necessarily be achieved. But they are powerful signs of hope, compared to the dangerously escalating tensions of the recent past. We call for the international community, and especially the United States of America, to respond affirmatively to these signs of hope, with reciprocal tension-reducing and trust-building measures.

We fervently hope that the momentum for peace will continue despite the undoubted difficulties and complexities lying ahead. We pray that this momentum will not be reversed by the unwise resumption of threatening military exercises, and that the drums of war will be silenced.

In our gathering in Seoul on 5-7 March 2018 we heard stories of the agony of division from the people of the Peninsula and the Korean diaspora, and shared hopes for peaceful coexistence and reunification. Peace-loving Christians and citizens shared visions for peace and reconciliation, and policy experts and former government officials proposed realistic ways of achieving a sustainable peace system on the Korean Peninsula. However, outside of our conference we see national leaders continuing to cling to Cold War discourses, seeking to coerce each other by threat and use of force. Now as much as ever before we recognize the need to proclaim the principles of the ‘88 Declaration, as the issues it addresses remain powerfully and urgently salient today.

We reaffirm the five principles proclaimed in the ‘88 Declaration, which influenced later ROK government efforts at dialogue, and which are still necessary for resolution of division today: Independence, Peace, Grand National Unity, Humanitarianism and People’s Participation.

We again call ourselves, as Christians, to repent that too often we have turned ideologies of domination and imperialism and Cold War antipathy into idolatries that affirm and sustain the divisions separating North Korea from the South, from countries in the region and the West, and among factions within South Korea and each of our societies. When we regard the status quo as good and necessary, we obscure the complexity of historical and political factors behind the division, without and within Korean society, and we abdicate our collective responsibility to heal it. We confess that the Church has helped create and condone division, and has contributed language and theological frames that validate empire and structural violence, both between people and states. We believe that each side’s preconditioned insistence on the other’s retreat in the Korean context will only perpetuate the cycle of tension and division, and we call for those who would follow the example of Christ to seek peace by challenging not only the predominant powers of empire and war, but also the cultural values, social assumptions, and gender norms based on power and privilege.

Peaceful resolution to the continuing crisis on the Korean Peninsula can only come through authentic dialogue at the table to which the ROK and DPRK have now returned. We call on the United States of America to join them at the table of dialogue, so that hope for peace may be strengthened. We also call on China, Russia and Japan to work together with them for peace on the Korean Peninsula, and to develop a Northeast Asian common peace and security system.

We declare that repeated military drills practicing invasions and assassination strikes, as well as threatening others with nuclear attack, prevent us from entering the path to peace. No peace system can be stable so long as nuclear weapons are used to threaten others on the Korean Peninsula or anywhere else in the world. But we also recognize that in a world that still accepts nuclear weapons as a legitimate form of deterrence in the hands of some, others will inevitably seek to acquire the same deterrent against those that threaten them. Rather than insisting on denuclearization as a precondition for dialogue – a precondition which will almost certainly preclude the possibility of dialogue in the current context – we call for dialogue in order to move towards denuclearization.

Ultimately the best hope is that offered by the recently adopted Treaty on the Prohibition of Nuclear Weapons, that seeks to eliminate not only from the Korean Peninsula but from the entire world the most destructive and indiscriminate weapon of mass destruction ever devised by human beings, and which from any ethical point of view must be considered inherently condemnable. As a reciprocal measure in response to the DPRK’s indicated willingness to discuss denuclearization, we invite the South Korean government to consider signing this Treaty as an expression of intent.

We express our deep concern about the impacts of further tightening of inhumane sanctions against the DPRK. The North Korean sanctions regime, already the most stringent ever developed, has not demonstrated any positive impact in its stated purpose of promoting a return to negotiations; neither has it prevented North Korea’s development of nuclear weapons and inter-continental ballistic missile capabilities. But it has, despite relevant exemptions in the sanctions regime, contributed to impeding humanitarian access to North Korea for disaster relief and other humanitarian purposes, thereby harming the poor and most vulnerable people in North Korea. Moreover, it has contributed to escalating tensions in the region, and to damaging the environment for new dialogue initiatives. In the interests of reducing tensions and encouraging dialogue as well as of increasing humanitarian access, we call for the suspension of the most recent and most stringent economic sanctions against the DPRK.

Through this Conference we have reached a consensus that we must work together with renewed urgency to prevent another war in the Korean Peninsula, to reduce tensions and promote dialogue, and that establishment of a peace treaty for the Korean Peninsula is a critical and immediate necessity for denuclearization and peaceful coexistence on the Peninsula. We point to the fact that the division of Korea – and the suspended but unresolved state of war – is itself the root cause and rationale for ongoing military confrontation, the arms race and the proliferation of nuclear weapons in the region. Therefore we must remove the unresolved conflict and division as a source of tension and confrontation. In order to do so, we call for dialogue that is based less on narrow conceptions of national security, and more on people’s security.

In recognition of the emergency on the Korean Peninsula, we exhort the international ecumenical community to join us in this call for dialogue between the nations embroiled in this conflict, and to help us build peaceful and humanizing relationships across the borders of conflict through, among other things, the initiatives outlined in the Action Plan developed on the basis of discussions in this conference.

The ecumenical community has affirmed that God’s peace and justice is based on the belief that without justice for all everywhere we shall never have peace anywhere. Indeed, peace in the world depends on realizing peace on the Korean Peninsula. In the 30 years since the 1988 Declaration we have been dedicated to cultivating peace. Like the persistent widow mentioned in Luke 18, we can claim hope as the fruit of our persistence, described in our conference as a “fierce patience.” Paul’s letter to the Galatians encourages us to “not grow weary in doing what is right, for we will reap at harvest time, if we do not give up” (Gal. 6:9). We recognize the political events of the day present us with Kairos moment. We stand at the edge of possibility, and with God’s grace we proclaim that the time for peace on the Korean Peninsula is now.