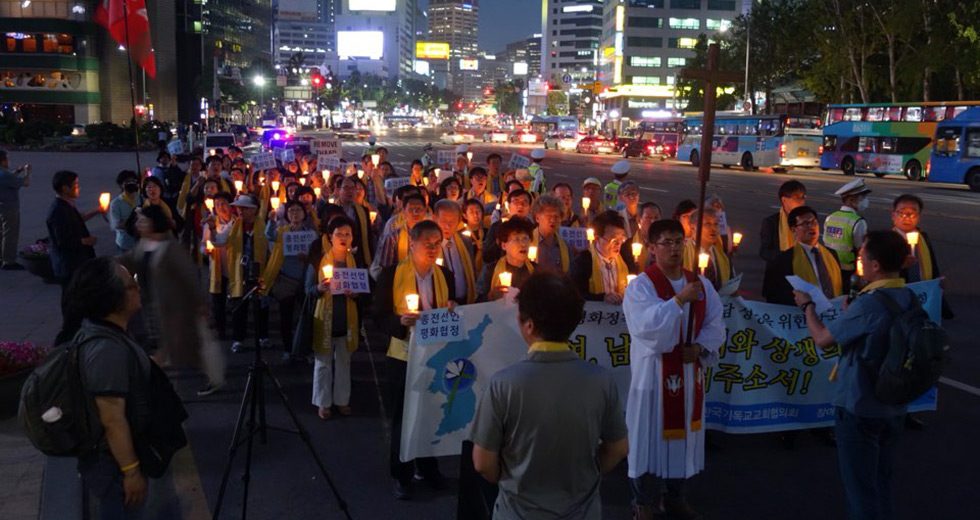 The World Communion of Reformed Churches (WCRC) calls on its members to join sisters and brothers around the world to pray for a successful summit meeting between the leaders of the Democratic Peoples Republic of Korea (DPRK) and the United States of America (USA) on Tuesday, 12 June.

The WCRC Executive Committee, in a message from Seoul, stated:

The journey for peace in the Korean context is an inspiration. While we met we took notice of what was happening in the wider world. We invite the Communion to prayer and advocacy for these situations particularly for a successful summit meeting between North Korea and the USA.

In the latest in a series of public prayers, on 7 June in downtown Seoul the Presbyterian Church in the Republic of Korea (PROK) and the National Council of Churches in Korea (NCCK) co-led a candlelight prayer service for the success of the coming DPRK-US summit and for peace on the Korean peninsula. The service began near Seoul City Hall with prayer, singing, a reading of statements and a message given by Rev. Han Ki-yang.

Han discussed the need for the world to follow Koreans as they seek to bridge the divide of the conflict through respectful dialogue and mutual assurances of security. He noted that some are seeking to block such efforts through accusations and condemnation of the other, hoping that we will conquer them and declare them illegitimate. He encouraged those gathered to courageously share the message of the need to drop hostile threats and persuade national leaders to seek peace through building mutual trust.

The prayer service concluded with a candlelight prayer march from City Hall to the front of the US Embassy near Gyeongbokgung Palace. The NCCK asks partners to continue praying with us in solidarity for a successful outcome of the DPRK-US summit.

The Presbyterian Ministry at the United Nations prayed together on 8 June, using this prayer from the NCCK, which we commend to all:

Lord, let peace be established on the Korean peninsula through the DPRK-USA summit, and lead us to open up an era of coexistence.

Lord, may the Korean peninsula accomplish holistic peace, so that we may spread hope for the world.