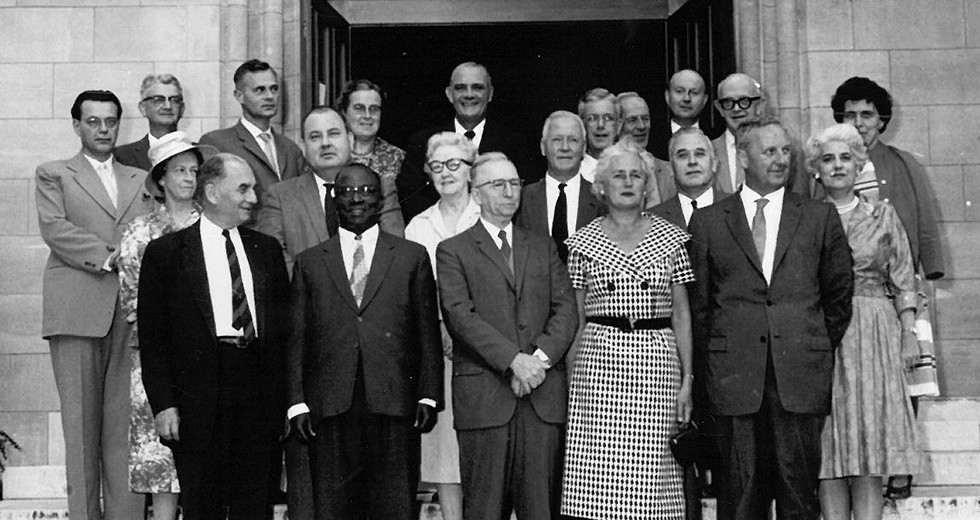 History of the WCRC

The WCRC and its member churches have roots in the 16th-century Reformation led by John Calvin, John Knox, Ulrich Zwingli and the earlier reforming movements of Jan Hus and Peter Valdes. Our churches are Congregational, Presbyterian, Reformed and United/Uniting and Waldensian. Today most member churches are in the Global South and many are called to witness as religious minorities in their countries. WCRC has its secretariat in Hannover, Germany.

The organization we now know as the World Communion of Reformed Churches was born in July 1875 when a group of Reformed Christians gathered in London to adopt the name “The Alliance of Reformed Churches throughout the World holding the Presbyterian System.” This began the journey of the body that James McCord described in 1975 as “the oldest organized world family of Protestant Churches.”

In June 2010, another Uniting General Council (UGC) took place – this time uniting the World Alliance of Reformed Churches with the Reformed Ecumenical Council. The venue for this UGC was Grand Rapids, Michigan, USA. It is here that the life of this continuing body began under the new identity of World Communion of Reformed Churches.

In the entire life of the communion, from 1875 to date, three of the many important commitments are:

1. Bringing Reformed Christians and United churches with Reformed components together for the sake of common witness to the Lord Jesus Christ. This from 1875 was understood to include spreading the Gospel and being agents of societal transformation. Therefore the history of the communion is punctuated with strong stances against colonialism, Nazism, racism and apartheid, gender injustice, economic injustice, climate injustice, etc,.

2. Strengthening smaller and “weaker” Reformed churches wherever they are found, and when they are going through challenges.

3. Making every effort to contribute to Christian unity. In his book “A Century of Service” the fifth General Secretary of this family of churches (Marcel Pradervand) linked this commitment to Calvin’s vision expressed in a 1552 letter to Thomas Cranmer in which he expressed readiness to cross ten seas for the sake of Christian unity. In the foreword of the same book, James McCord pointed out that this communion was very instrumental in the formation of the World Council of Churches. In the WCRC understanding, to be Reformed is to be ecumenical. The events of uniting that took place in 1970 and 2010 are therefore both expressions of living out what the organization is called to be. It is also clear that throughout our history, it is this body that positively expresses very clearly the appreciation of the presence of uniting and united churches in its membership.

1875
London Conference establishing the Alliance of Reformed Churches throughout the World holding the Presbyterian System. In the early part of the 20th Century, it became known for short as the World Presbyterian Alliance.

1880s
Challenged colonialism policies of European countries as they affect countries like New Hebrides and Congo.

1888
General Council decided to establish the office for a full time general secretary. This was first based in London and in 1913 moved to Edinburgh.

1890
Sent a delegation to the Anti-Slavery conference in Brussels.

1910
Participated in the Edinburgh Missionary Conference.

1920s–1940s
The Alliance maintained a strong stance against Nazism, standing with the Confessing Church in Germany; facilitated international reception of the Barmen Declaration of 1934.

1946
The Reformed Ecumenical Synod was formed with its first Assembly in Grand Rapids, Michigan, USA.

1948
The General Council voted to move its office immediately to Geneva and to scale down the profile of the general secretary to executive secretary. The vision was to be closer to and more supportive of the WCC, which was about to hold its first Assembly. The Alliance returned to the term general secretary in 1954.

1948
The International Congregational Council elected its first full time “minister and secretary” (equivalent to the Alliance’s general secretary). Prior to this it was a voluntary position held by a person who also functioned as a pastor in a parish or an officer in one of the member churches.

1949
The first World Conference of Reformed and Presbyterian Youth was held.

1950s ff
The Alliance increased its discussions and actions on racism and especially against apartheid.

1954
In the Alliance’s 17th General Council in Princeton, New Jersey, USA, there was a clear decision to work towards gender inclusivity of delegates. Before then most women participants came as spouses of delegates and had their own parallel programmes.

1986
The Belhar Confession was developed in South Africa. The Alliance both supported it and became its platform for international reception and solidarity.

1989
The Alliance instituted a Programme to Act Challenge and Transform (PACT) in order to stimulate churches’ actions on gender justice.

2002–2005
Questions on whether or not the term “Alliance” was appropriate for the organization, leading to a vigorous discussion on becoming a communion.

2004
The Accra Confession was adopted by the Alliance’s 24th General Council. The churches declared their understanding of God’s calling in the contemporary world vis-à-vis economic injustice and climate injustice. The discussions that led to it took more than ten years.