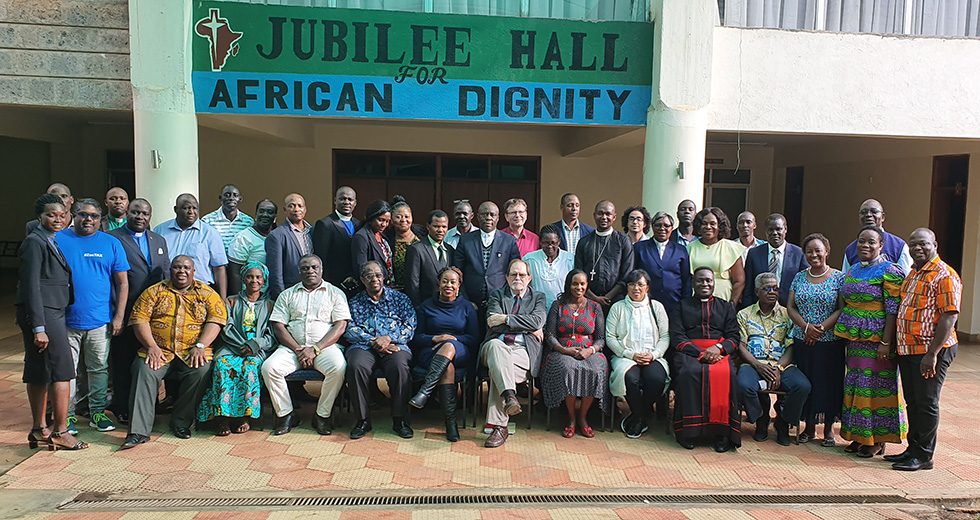 The Accra Confession was the focus of a capacity building consultation that gathered over three dozen church leaders from across Africa in Nairobi, Kenya, in early November.

The Accra Confession, adopted by the World Alliance of Reformed Churches and reaffirmed at the World Communion of Reformed Churches Uniting General Council, is based on the theological conviction that the economic and ecological injustices of today’s global economy require the Reformed family to respond as a matter of faith in the Gospel of Jesus Christ.

Following the justice traditions of the biblical prophets and of Jesus in the gospel narratives, the Accra Confession views the current world situation by “looking through the eyes of powerless and suffering people.” It calls the churches and society to hear the cries of the people who suffer and the woundedness of creation itself, over-consumed and under-valued by the current global economy.

“The Accra Confession is important because it speaks to issues of justice that are of concern to the women in my church and community,” said Veronica Muchiri of the Presbyterian Church of East Africa and a member of the WCRC Executive Committee. “Many women are struggling to make a living to feed their families and take their children to school. The question of economic justice is constantly on their minds as they see other people who are extremely rich, driving big cars and living in posh homes. They wonder whether they are children of a lesser God.”

Setri Nyomi, former WCRC general secretary and a minister in the Evangelical Presbyterian Church, Ghana, said, “In the work my church is doing, it is in our consciousness that injustice is wrong, and has brought much suffering to many in our communities. For some of us when we preach or engage in pastoral care, the values of the Accra Confession shape our messaging.”

Fifteen years after its adoption, the Accra Confession is “still very relevant today even more than when it was first written. The urgency for the churches to confront and speak out against injustice needs to be louder and clearer now than ever before,” said Muchiri.

And yet it was widely acknowledged that the confession is not well utilized. “The Accra Confession is the WCRC’s gift to the world. It needs to be in every conversation of WCRC leadership at all levels with its member churches at all levels,” said Nyomi.

To that end, participants at the consultation committed to renew their efforts to engage in it through theological reflections and other ways to bring it alive among the people.

The consultation was supported by funding from Otto per Mille.