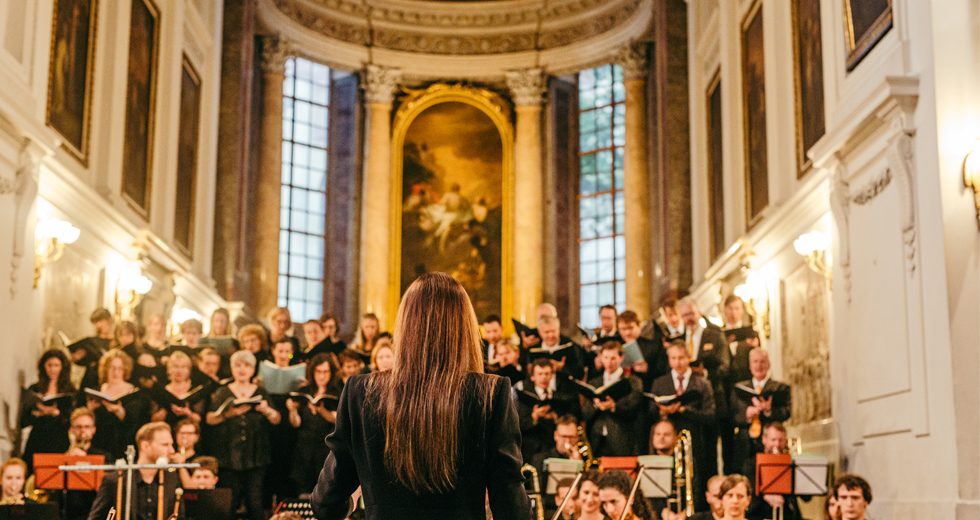 Aus Tiefer Not (“From Deep Distress”), a new psalm commissioned by the WCRC for the occasion of its 2017 General Council in Leipzig, made its world premiere at the Nikolaikirche Tuesday, 4 July. The composition was created by collaborators Geonyong Lee and Cord Meijering and drew a standing ovation at its conclusion.

“This piece was so amazing!” exclaimed delegate Clariana Lia Teixeira from Brazil. “I just loved it.”

Instrumentation included a pipe organ, a full orchestra, flute, drums and a guitar. Mezzosoprano Elisabeth Holmer played a central role in the performance of the sacred work, and the Reformed Church of Leipzig contributed a good deal. The church’s choir sang throughout much of the work, and its Cantor Christiana Bräutigam directed the piece.

Each movement of “Aus Tiefer Not” alternated between deep lament and the response of a hopeful psalm. The work’s tragic movements sounded discord: the simulated gunshots of a snare drum, the eerie, airy voice of a flute and the mournful tones—even shrieks—of Mezzosoprano Holmer. In contrast, the piece’s psalm-based movements incorporated the close harmonies of stringed instruments, the soaring, melodic voices of the Reformed Church choir, and biblical promises that “Those who sow with tears will reap with songs of joy” (Psalm 126).

Teixeira found the interchange between musical movements deeply moving: “The words of tragedy followed with words of joy; the sounds of modern music followed by traditional sacred music; the agonizing words of the world followed by the hopeful words of the psalms. I cannot express how this music reached into my soul.”

When the WCRC decided to commission a new musical work for the 2017 General Council, there was quick consensus that only a psalm would do.

“Psalms express sentiment in an extraordinary way,” said General Council Coordinator Rev. Dr. Hanns Lessing. “They speak bodily of themes that are understandable cross-culturally.” He added that psalms also address both sorrow and hope in a way that seemed especially appropriate for modern times.

The work closed with a “Hallelujah” sung by the choir—and the congregation. It was a dramatic moment in which the members of the Council were invited to add their voices to the hope expressed in the Gospel.

“Of all the moments in this piece,” said Teixeira, “of all the beautiful moments, this is the moment I will take with me: the words, ‘How good and pleasant it is when God’s people live together in unity!’” (Psalm 131) “Isn’t that what this whole conference has been about?”