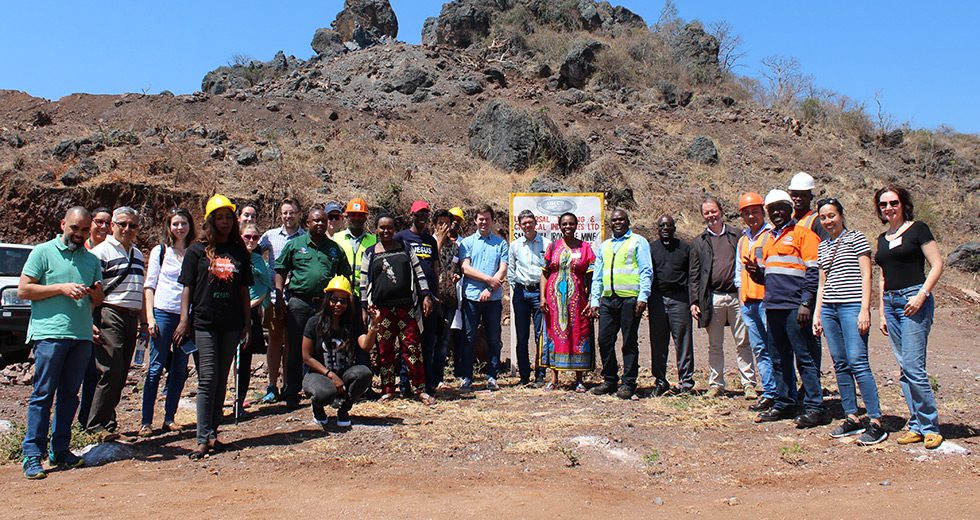 To witness and attempt to understand contrasting narratives of foreign investment-linked development and socio-economic injustice, participants of the Ecumenical School on Governance, Economics and Management for an Economy of Life (GEM School) visited a mining company on 22 August.

The GEM School 2017 was promoted by the World Council of Churches (WCC) and World Communion of Reformed Churches (WCRC) from 21 August – 1 September in Lusaka, Zambia.

In the context of African developing countries, like Zambia, foreign investments play a significant role as a source of external finance, technological advances, and competencies that aim to bring economic and community development to the host country.

In this role, foreign investors are often looked upon as a source of increased domestic investment, exports, economic growth, employment and technological transfer. Foreign investors are also often expected to contribute to the education, health and infrastructure sectors through corporate social responsibility programs.

The GEM School was welcomed by the management of Universal Mining & Chemical Industries Limited (UMCIL). The company shared its mission of increasing Zambia’s steel production and overcoming the challenge of not getting enough scrap metals which reduces production in some of their steel plants. With the opening of Sanje Iron Ore Mine in Nampundwe, UMCIL intends to produce quality and more affordable products. Steel from its Kafue plant is being exported and then finished products, like metal, are being imported or re-supplied back to Zambia.

The visit was facilitated by the Council of Churches of Zambia (CCZ).

With decades, and in some cases, centuries of foreign investments in Zambia and their expected contributions, it is often challenging to understand the socio-economic injustices experienced by the communities that surround them. With the number of big investors in the mining sector that harness the potential and make a profit from Zambia’s natural resources, it has always been a question of who is really benefiting when the local poverty level remains high, heritage is trespassed, health and safety are compromised and human rights are violated.

With the assistance and introduction of the UMCIL Human Resources office, participants from the GEM School were also warmly welcomed by people living around the Sanje Hill Mine. Headmen, headwomen, youth, and some members of five communities in Nampundwe gathered and openly interacted with the students and organizers of the GEM School.

In group discussions, the majority of community members, and even headmen shared how unhappy they are with the mine. They shared that the agreements signed were not fulfilled and they are not aware of the development and corporate social responsibility programs that were shared by the mines with the GEM School.

Though some of their members are employed by the mine, the majority of the community is not aware of boreholes, clinics, schools and foot paths created by the mines for them.

While processing the experience back at the GEM School center, students highlighted the story from the communities on how the mines have affected livelihood, culture, and spirituality.

The Sanje Hill where the company is now mining iron ore used to be a shrine for the community. While the younger generations have found a faith connection in Christian churches that has taken over the role of the shrine, it is a big loss spiritually for the older generation.

“The community and churches must speak with one voice and must also take these issues as issues of the church,” WCC deputy general secretary Rev. Dr Isabel Phiri said to the communities during their group discussion.

Representatives from CCZ shared how they have helped churches respond to socio-economic, development and unity issues of the society with a vision to have a transformative impact on human dignity and Christian unity.

With issues related to mining, CCZ engages the communities, mining companies, and the government to create a platform for a peaceful dialogue where each party validates contrasting stories and addresses one problem at a time. The community is encouraged and empowered to also be accountable.

“Zambia is a mining country. It gets most of its revenue from the mine and it will not stop mining. We need to find a place to build a relationship and sort out environmental, cultural, social-and economic problems specifically related to the mine,” said CCZ project officer Andisen Zulu.

Photo: GEM School participants during the visit to the mining company. © Adrian Mendoza/CCZ
Article courtesy of the World Council of Churches.