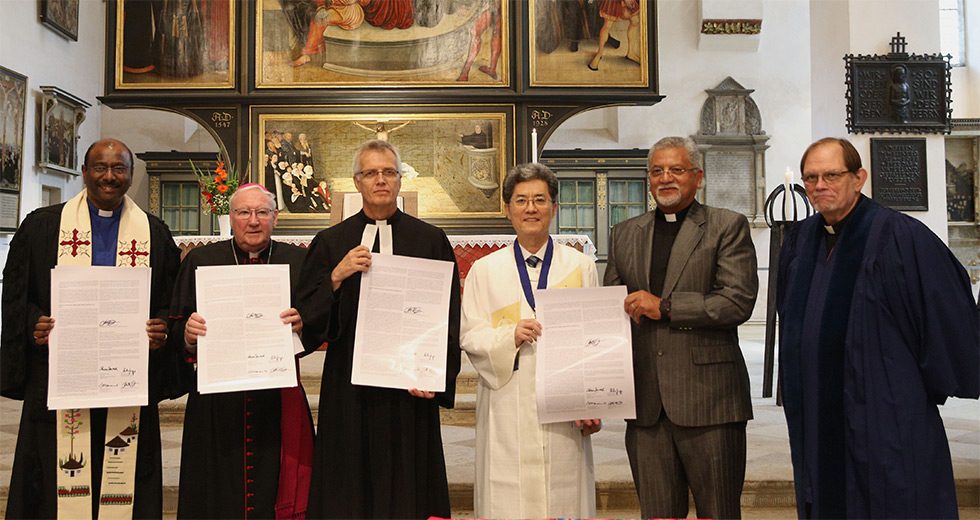 “In the pursuit of communion and common witness”

In an ecumenical worship service, held in the City Church in Wittenberg today, the World Communion of Reformed Churches (WCRC) and The Lutheran World Federation (LWF) signed the Wittenberg Witness, a common statement affirming their common call to continued renewal and cooperation on the occasion of the 500th anniversary of the Reformation.

“We approach the Reformation anniversary from the perspective of the unity of the body of Christ, which is a gift of God. This means we approach it with a spirit of ecumenical openness and accountability. The Wittenberg Witness is a testimony to this,” said LWF General Secretary Junge.

“As we say in the Witness itself, as world communions, we commit to explore new forms of life together that will more fully express the communion we already have in Christ,” said WCRC General Secretary Ferguson. “We call on our member churches to find ways to more fully live out these commitments together in their local contexts, making our unity more visible.”

The Wittenberg Witness builds on decades of theological dialogue and on steps taken by LWF and WCRC member churches around the world. It offers gratitude for the unity the churches already have in Christ, celebrates what they have in common, acknowledges and laments the still dividing issues, and expresses the common call of churches to witness in the world.

It calls for a “renewed imagination of what being the church in communion” means today. “We need a new imagination to dream a different world, a world where justice, peace and reconciliation prevail.”

The WCRC also signed an association agreement to the Joint Declaration on the Doctrine of Justification (JDDJ), originally signed by the LWF and the Roman Catholic Church in 1999. The JDDJ describes the agreement between the LWF and the Catholic Church on what was a church dividing issue at the time of the Reformation. “We rejoice together that the historical doctrinal differences on the doctrine of justification no longer divide us.”

In 2006 the World Methodist Council (WMC) and its member churches affirmed the fundamental agreement with the JDDJ that the mutual condemnations of the 16th century Reformation do not apply to the current teaching on justification.

Today, the WCRC joins the other Christian World Communions, officially affirming that agreement while also bringing its own particular emphases to the association agreement, underscoring the integral relation between justification and justice.

WCRC General Secretary Ferguson signed the statement on behalf of the Reformed Communion. The joint affirmation was also signed by the original JDDJ signatories and the parties that endorsed the agreement on justification: LWF General Secretary Junge,Secretary of the Pontifical Council for Promoting Christian Unity Bishop Brian Farrell and WMC General Secretary Bishop Ivan Abrahams.

“We commit ourselves to strive together for the deepening of our common understanding of justification in theological study, teaching and preaching. The present achievement and commitment are viewed by Catholics, Lutherans, Methodists and Reformed as part of their pursuit of the full communion and common witness to the world which is the will of Christ for all Christians.”—Official Common Affirmation