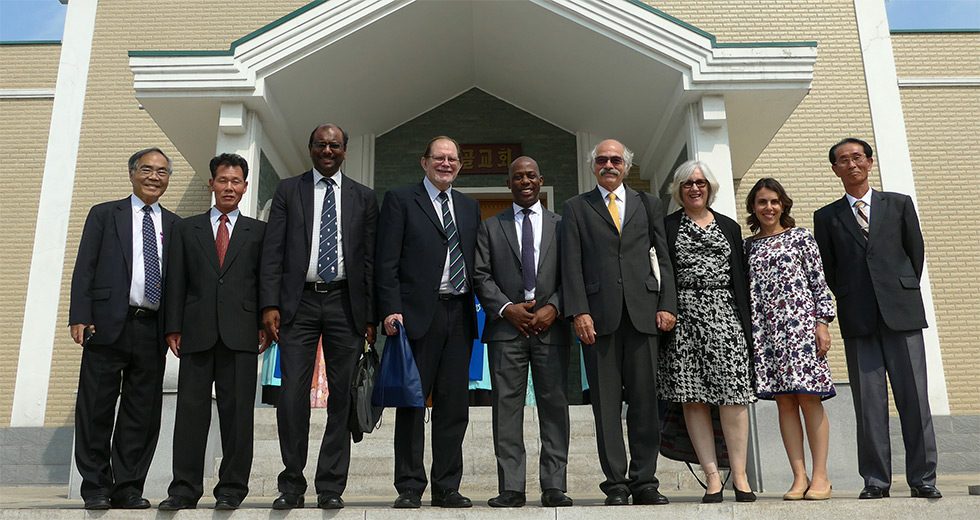 A World Communion of Reformed Churches (WCRC) delegation visiting the Democratic People’s Republic of Korea “heard the urgent wish for the de-escalation of provocation and tension, the need to reestablish dialogue and negotiations and the desire to change the armistice into a peace treaty,” said Chris Ferguson, WCRC general secretary.

The visit, which took place 24-29 September 2016, was in the context of the long standing commitment of the WCRC, the World Council of Churches and the wider ecumenical movement to be in contact with Christians in North Korea and to advocate for the peaceful reunification of the Korean Peninsula.

“We were told firmly that North Korea remains committed to peace and reunification in the face of the current situation,” said Ferguson at a press conference in Seoul after the visit to Pyongyang.

“We want the end of nuclear weapons. We want all of Asia to be a nuclear-free zone and the whole world to be free of the threat of nuclear escalation,” Ferguson said. “But this will require creating a platform of dialogue where all countries feel heard, honoured and respected.”

Jerry Pillay, WCRC president, agreed: “Whilst we heard a very strong affirmation for working for peace, reconciliation and reunification there are different visions and ideas of how we may get to this which requires collective dialogue and engagement.” 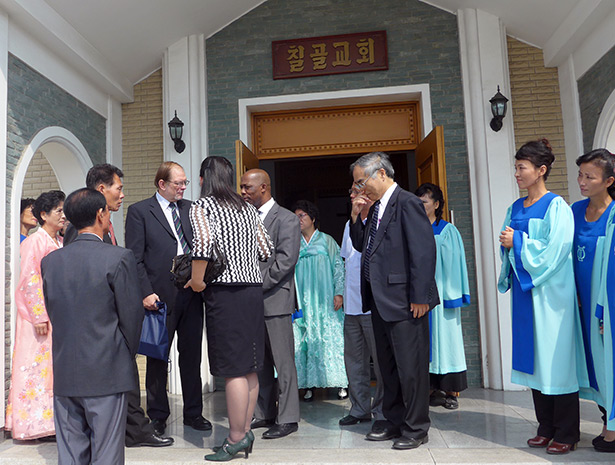 The delegation was hosted by the Korean Christian Federation (KCF). The delegation worshipped with the local congregation at Bongsu Church and also met with Christians at the Chilgol Church in Pyongyang. It held conversations with the leadership of the KCF, as well as with Vice President Kim Yong Dae of the Supreme People’s Assembly.

The KCF reiterated its desire to maintain good relations with the churches and ecumenical organizations around the world and appealed to them to continue to work in favour of peace and reunification on the Korean Peninsula. It welcomed the invitation by the WCRC to send representatives to its General Council in Leipzig, Germany, in June 2017.

The WCRC delegation also brought financial assistance for the relief and recovery efforts after widespread devastation caused by Typhoon Lionrock a few weeks previously. The National Council of Churches of [South] Korea has also issued an urgent appeal to help the thousands impacted.

“Every effort is being made before winter comes so that people can have houses and a secure place to live,” Ferguson reported. “In our visits to the churches in Pyongyang, we heard that many of the prayers and expressions of concern were directed to the welfare of the people affected.”

The WCRC delegation was led by Pillay and Ferguson. It included Carola Tron, moderator of the Waldensian Church of the River Plate and member of the WCRC’s Executive Committee and Dora Arce-Valentin, WCRC executive secretary for justice. The general secretary of the Council for World Mission, Collin Isaiah Cowan, took part as an ecumenical partner. Victor Hsu from Taiwan and Paul Oppenheim from Germany accompanied the delegation as consultants.