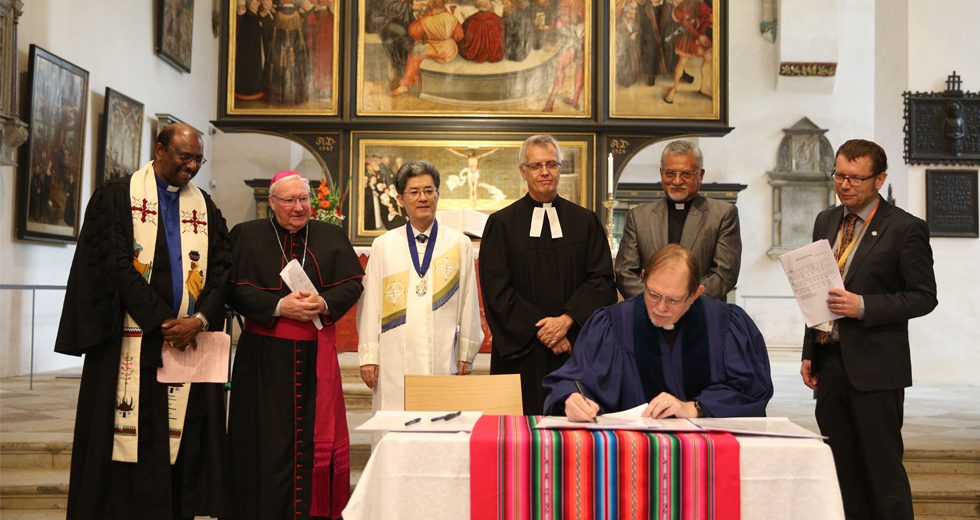 The World Communion of Reformed Churches has formally joined an ecumenical statement with Roman Catholics, Lutherans and Methodists aiming to overcome divisions between Protestants and Roman Catholics from the time of the Protestant Reformation.

“Today is a historic day,” said Jerry Pillay, president of the World Communion of Reformed Churches (WCRC), at a ceremony on 5 July in the eastern German town of Wittenberg, where Martin Luther lived and worked. “The documents we are signing today are significant and symbolic of the road we are to travel.”

Pillay was speaking as the WCRC, which groups more than 225 Protestant churches worldwide, formally associated itself with the Joint Declaration on the Doctrine of Justification, originally signed by the Lutheran World Federation (LWF) and the Roman Catholic Church on 31 October 1999.

“Catholics and Lutherans stated that a ‘consensus in basic truths exists between Lutherans and Catholics’ in regard to the theological controversy with was a major cause of the split in the Western church in the 16th century,” said Bishop Brian Farrell, secretary of the Vatican’s Pontifical Council for Promoting Christian Unity during in the ceremony.

The declaration stated that mutual condemnations pronounced by the two sides during the Reformation do not apply to their current teaching on justification.

“Today we are not only signing a statement, we are building a church together,” said the Rev. Najla Kassab from Lebanon in her sermon at the service in the Stadtkirche, where Luther used to preach.

The ceremony took place in the year marking the 500th anniversary of Luther’s denunciation of church corruption in his 95 Theses, an event that helped set in motion the Reformation and centuries of division between Protestants and Catholics.

“The present achievement and commitment are viewed by Catholics, Lutherans, Methodists and Reformed as part of their pursuit of the full communion and common witness to the world which is the will of Christ for all Christians,” said WMC president Jong Chun Park.

Pope Francis, in a message read by Bishop Farrell, described the ceremony as “an eloquent sign of our commitment to walking together, as brothers and sisters in Christ, on a journey from conflict to communion, from division to reconciliation.”

During the service, the LWF and the WCRC also signed a “Wittenberg Witness” pledging to strengthen cooperation and joint action.

“We commit ourselves to redouble our common efforts to embody our unity, together resisting the forces of injustice and exclusion,” said Martin Junge, LWF general secretary.

At the service there were prayers of repentance and lamentation for past divisions and wrongs, and commitments to work for unity and justice. 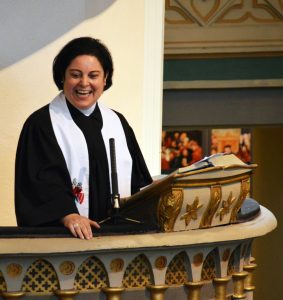 “The Reformation taught us accountability,” said Kassab in her sermon.

“Wherever we are in the church we are held accountable,” said Kassab, who was ordained in March as the second female minister in the National Evangelical Synod of Syria and Lebanon. “Today we are reminded of Luther’s words from his pulpit, ‘A religion that gives nothing, costs nothing, and suffers nothing, is worth nothing.’”

All human beings are valuable in the eyes of God no matter what their colour or gender or race or passport, she said.

“Here I stand, a Middle Eastern women in the pulpit of Luther,” said Kassab, to spontaneous applause. “If only Luther had imagined this, this could have been his 96th question to the church. Not, ‘Why there is a women in this pulpit?’, but ‘Why did take so long?’”

The ceremony in Wittenberg took place during the WCRC General Council which has brought about 1000 participants to the eastern German city of Leipzig.