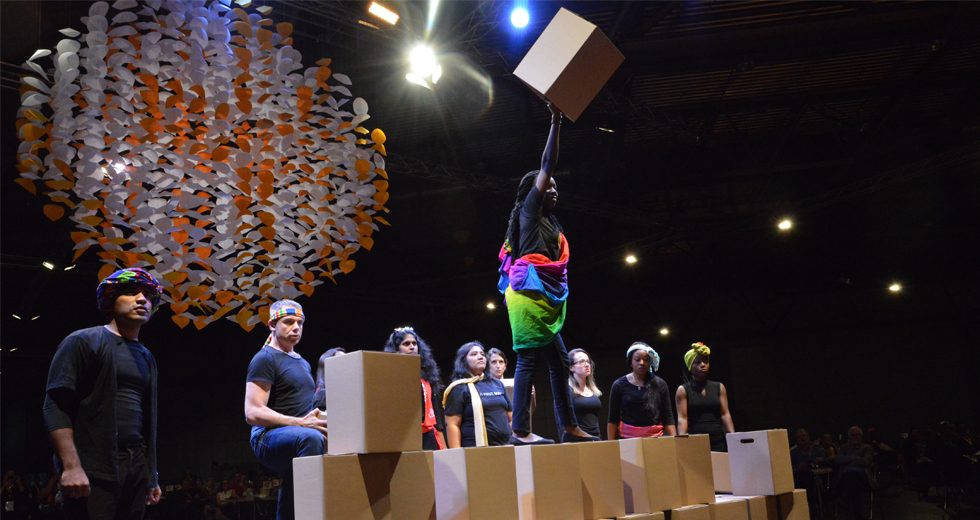 They arrived from five continents and 11 nations: Brazil and South Africa, Pakistan and Argentina, Canada and Ghana. Fifteen Reformed church members, none of them professional actors and all of them strangers to one another, arrived in Berlin in advance of the 2017 General Council of the World Communion of Reformed Churches. Their task was to create an original theatrical piece to be performed at the Council.

Performers were asked to consider the broad concepts of peace and justice in a Christian context. And they were asked to find inspiration from the Accra Confession. But there was no script to follow. The performance would be generated solely through group brainstorming sessions and would result in a single message conveyed theatrically.

Bárbara Santos, Till Baumann and Christoph Leucht facilitate productions such as this at Kuringa, a Berlin-based workshop specializing in Theatre of the Oppressed. Based on a performance practice originated in Brazil, Theatre of the Oppressed helps individuals find a voice and performance style to convey feelings of social subjugation and, when possible, to express demands for change.

Because of the large space the actors would occupy and because of language differences between team members and among Council attendees in the audience, the group of 15 quickly decided the performance would rely solely on body movements and props.

After a week’s worth of collaboration and rehearsal, the final performance took place in the Leipzig Messe’s Plenary Hall. Outside of colourful fabric wraps from the performers’ home countries, the only props included some two dozen cardboard boxes. Performers portrayed a group of indigenous people happily in control of a natural resource. Into this scene entered another actor, André Bartlett of South Africa, to trick the indigenous people into handing over their resources in exchange for nothing more than empty plastic bags. After the swindler uses his assistants to construct a wall of empty cardboard boxes between himself and those who had been cheated, the performance ended with the outraged indigenous people leveling the wall and shouting “Peace!” and “Justice!”

The creative collaboration was a powerful experience for delegate Simone Vishvabharatha of Sri Lanka. She was impressed by the way in which such a different group, with varied cultural backgrounds and spoken languages, could so quickly settle on a common theme of justice.

“This was true communion,” she said. “In every sense of the word. And that is what the WCRC should stand for.”

The experience has left him wondering whether the WCRC and future conferences might devote less time to lectures and instead incorporate more of the arts in its meetings. “We are so much in our heads,” said Mr. Kovacs. “But suffering is emotional. Suffering is physical. Just as the resurrected Jesus was a physical incarnation.”