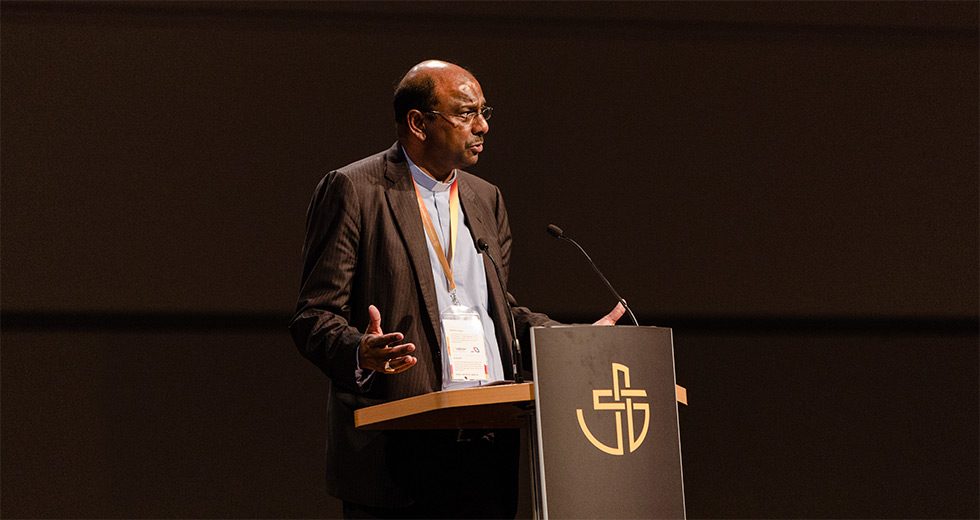 A world in crisis needs a renewed commitment to justice and peace, the president of the World Communion of Reformed Churches (WCRC), the Rev. Dr Jerry Pillay, has told delegates attending the WCRC’s global assembly in Leipzig, Germany.

“Today we live in a world in which the rich are getting richer and the poor poorer,” Pillay said in his report presented on the opening day of the WCRC’s 29 June – 7 July General Council, which is gathering about 1000 participants in the eastern German city.

“The WCRC is called to stand with the poor,” said Pillay in the report. “This is an essential basis for our renewal and transformation,” he said, a reference to the theme of the nine-day gathering, “Living God, Renew and Transform Us.”

“In light of the experiences in the world today, the WCRC is called upon exercise a prophetic voice which it did in opposing apartheid in South Africa,” underlined Pillay, a theologian from the Uniting Presbyterian Church in Southern Africa.

Five centuries ago Protestant Reformers such as Martin Luther in Germany, John Calvin in Geneva and Ulrich Zwingli in Zurich, Switzerland, denounced corruption and failings in the church of their time, Pillay stated.

They did not intend to found a new church, he continued, but to reform the whole church, which they did not believe was standing up and confronting financial corruption, sexual immorality and political power.

“Now, five hundred years later, the call for renewal and transformation has become even greater as we deal with the complex challenges of a suffering world and a struggling and divided church,” he stated.

“Human sexuality and the ordination of women continue to divide us even in the Reformed family,” Pillay told delegates.

A consultation to take place after the General Council would explore how to preserve unity and justice as WCRC faces the challenges of human sexuality, Pillay said.

On the recognition and acceptance of women in the leadership of the church, a “Declaration of Faith on the Ordination of Women” is to be presented to the Leipzig meeting.

“It is a road we must travel if we are to remain true to what we believe as a Communion,” Pillay said, even though some member churches remained opposed to the ordination of women.

The WCRC meeting is taking place in the year that commemorates the 500th anniversary of Luther’s 95 Theses denouncing church corruption, which led to a break with the Roman Catholic Church and the development of separate Protestant churches.

On 5 July, WCRC delegates will travel to Wittenberg, about 45 miles (72 kilometres) from Leipzig where Luther published his 95 Theses on 31 October 1517.

There the WCRC will host an ecumenical service of worship and sign an association agreement to the 1999 Joint Declaration on the Doctrine of Justification between the Lutheran World Federation (LWF) and the Roman Catholic Church, a key dividing issue during the 16th-century Reformation.

The WCRC will also sign an agreement with the LWF known as the “Wittenberg Witness” to strengthen cooperation between the two Protestant world organizations.

“Wittenberg, we believe, is an important venue for this event because it symbolically represents the breakup of the unity of the Christian church in the 16th century,” Pillay stated in his report. “Wittenberg can now be the symbol of renewal of the church and the hope that the division of the church can be healed.”