Faith has a duty to promote reconciliation, says German president 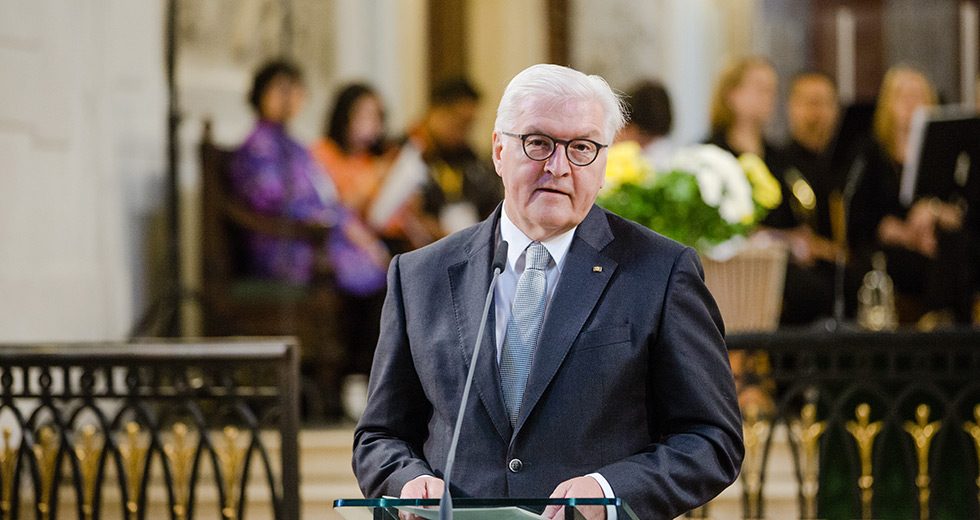 German President Frank-Walter Steinmeier has appealed to a global gathering of Reformed churches to demonstrate the peacemaking role of faith at a time when religious beliefs are misused to justify violence.

“Now more than ever the Reformed churches must make particular efforts to foster peaceful dialogue and to very consciously underline the power of religion to promote peace and reconciliation,” Steinmeier told the General Council of the World Communion of Reformed Churches, meeting in Leipzig, Germany.

“Most importantly,” the German president said on 30 June to the WCRC global assembly, Reformed churches must be “an example of this themselves.”

Steinmeier underlined the importance of the task, “at a time when religion is often misused as a means of isolation and distance, indeed as a pretext for the most brutal acts of violence.”

The German president was speaking at Leipzig’s historic Nikolaikirche—St. Nicholas’ Church —following the main welcome service of the WCRC assembly, which is gathering about 1000 participants in the eastern German city from 29 June to 7 July.

The WCRC president, the Rev. Dr. Jerry Pillay, recalled in his sermon at the service how in 1989 the Nikolaikirche became a focus for a peaceful revolt against communist rule in East Germany.

“On Mondays at 5pm people gathered for prayer and soon it evolved into thousands of people gathering with lighted candles in peaceful protest against communism,” said Pillay. “This church became a place of hope and freedom.”

In his address to the WCRC gathering, the German president said the 1989 “peaceful revolution” in East Germany might have turned out differently were it not for the prayers for peace at the Nikolaikirche and what they inspired on the streets of Leipzig.

“This is where people found the audaciousness to stand up against oppression and lies. This is where people experienced the freedom that empowers them to stand upright,” said Steinmeier. Such freedom—“religious freedom, freedom of conscience, political freedom and political self-determination”—is perhaps the most wonderful outcome of Reformation faith, he continued.

This made it particularly important, said Steinmeier, to work for freedom in places where censorship, repression and violation of fundamental human rights still prevail or are happening again.

“We should also take a stance when people are persecuted because of their faith and convictions,” the German president said. “People of many religions suffer persecution, but Christians in the Middle East are currently particularly severely affected.”

An active member of the Reformed church in Germany, Steinmeier noted how the WCRC was meeting in Germany as the country marks the 500th anniversary of Martin Luther’s Reformation.

Luther’s main impact was at first in German-speaking countries, he recalled, and it was primarily through the Reformers Ulrich Zwingli in Zurich and John Calvin in Geneva that the Reformation became a powerful European movement.

“The Reformed churches were a potent international movement from the start,” Steinmeier stated.

The German president welcomed the fact that during its global assembly, the WCRC would be associating itself officially with a key ecumenical statement, the Joint Declaration on the Doctrine of Justification, between the Lutheran World Federation and the Roman Catholic Church.

“This is a major step towards ecumenism,” Steinmeier said, at a time when Christian witness becomes ever less credible with Christians divided in different denominations and speaking with such different voices.