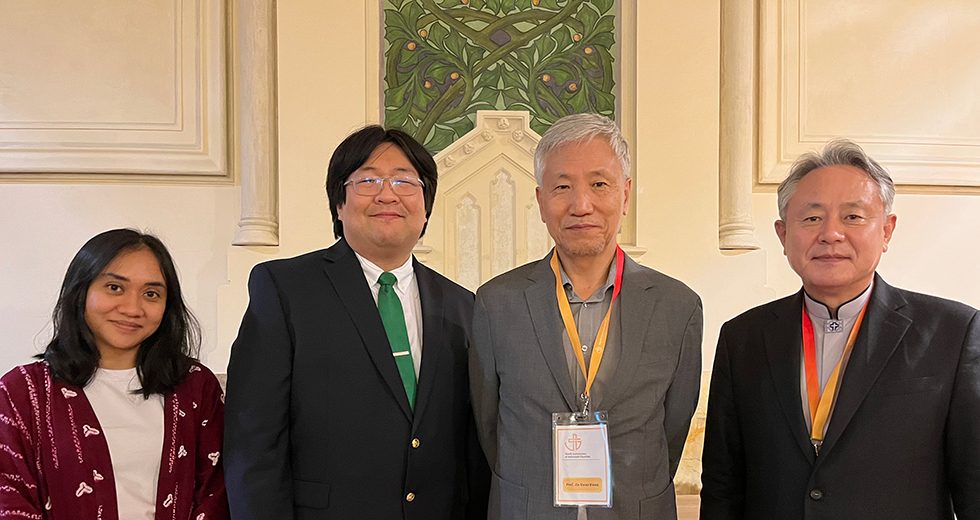 “Witnessing to a God of Life” was the theme for an ecumenical symposium paying tribute to the late Kim Yong-Bok.

“We invite you to engage with us in the ideas of the theology of life, which sees all life as interrelated. The World Communion of Reformed Churches owes a lot to these concepts, and we particularly want to pay tribute to the contributions of Kim Yong-Bok, without whom the WCRC would not be what it is today,” said Hanns Lessing, acting general secretary as part of the Collegial General Secretariat.

Letizia Tomassone spoke on “Witnessing to a God of Life: A Protestant Engagement with the Papal Encyclical Laudato Si.” She noted that while Protestant churches in Italy had been involved in environmental work for years, “the encyclical opened a new perspective in the ecumenical dialogue.”

Jin Kwan Kwon, in his keynote address “From Social Biography to Zoegraphy: A Long Theological Journey of Dr. Kim Yong-Bok,” provided a sweeping history of Minjung Theology, which developed the concept of a theology of life with reference to Korean Indigenous traditions.

“Life is lived in people in a wider web of life. For Kim Yong-Bok, the universe is first of all a communion of subjects, not a collection of objects or things. Yong-Bok views the universe as a mystery, the ultimate destination of all creation—the new heaven and the new earth, life together,” he said.

He went on to explain that Kim Yong-Bok believed that “the subject does not abide in a particular being; the subject abides in the whole being of life, in the whole of creation. This is the power that must take on the power of global capitalism” that is destroying God’s creation.

In his response to the keynote, “People as the Pivot of Missio Dei – A Religio-Social Horizon of Kim Yong-Bok’s Minjung Hermeneutics,” Lee Hong-Jung said, “Justice and equality are essential. All people should be treated as God is treated. Doing harm to others is doing harm to God. Missio Dei is a kairos event that happens in the ministry of the people.”

Henry Kuo’s response, “Remembering the God of Life for a World on Edge,” argued that the voices of the marginalized “become an interruption that’s prompted by the Holy Spirit, and that interruption should teach us the way to righteousness and witness in an increasingly unstable, fear-driven, and anxious world.”

“Witnessing to a God of Life: Embracing Embodiment Theology” was Pauline Patricia’s response to the keynote. “Witnessing to the God of life is a bodily experience. Our body is a shared body broken down by crucifixion. The wounded body of Jesus became a sign of the body of every wounded woman,” she said, sharing her autobiography as a victim of sexual abuse as a child and how it compelled her journey toward dismantling patriarchy.

“Apart from theology providing a dialogical space, liberation theology compels us to do something, to be committed to a theology that transforms,” said Philip Vinod Peacock, WCRC executive for justice and witness as part of the Collegial General Secretariat, in summary remarks at the conclusion of the symposium.

Held in conjunction with and at the Waldensian Faculty of Theology in Rome, Italy, the symposium, took place on 27 October.

It was the first of what will become an annual event to introduce important Reformed thoughts into the ecumenical discussion in Rome, Italy.

It is anticipated that the presentations made at the symposium will be collectively printed in either a special booklet or in Reformed World, the theological journal of the WCRC.

Jin Kwan Kwon is a professor at the Anglican University (Seoul). Letizia Tomassone is a member of the Waldensian Faculty of Theology. Lee Hong-Jung is general secretary of the National Council of Churches in Korea. Henry Kuo is a professor at Greensboro College (North Carolina, USA). Pauline Patricia is from the Protestant Church in West Indonesia.