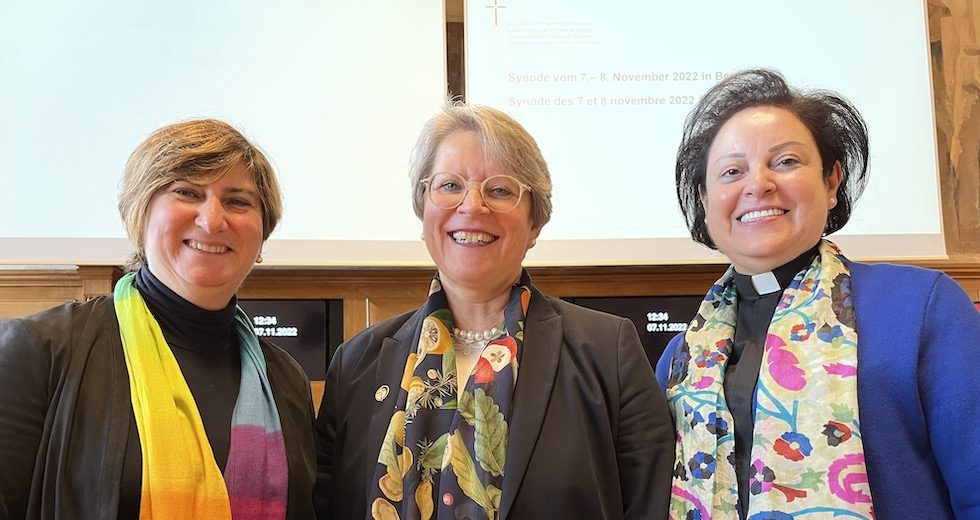 Najla Kassab, president of the World Communion of Reformed Churches, brought greetings to the Synod of the Protestant Church in Switzerland.

“We thank God for the opportunity of meeting as partners and members in the World Communion of Reformed Churches, committed to a journey together towards justice,” Kassab said.

“‘Called to Communion, committed to justice’ remains the theme that guides our joint efforts. Today we affirm our enthusiasm to live our call for continual reform and to speak to the needs of the people, in securing the dignity of the people. We meet to focus on the people rather than institutions and structures, and we dare to stand for all that the Word of God challenges us so that all may have life and dignity,” she said.

The synod gathered 7-8 November in the Bern Rathaus. In its business, the synod re-elected Evelyn Borer as synod moderator and dealt with future financial planning.

“Justice is an urgent, pressing need today whether it is related to climate change, or solving conflicts through dialogue away from weapons, or dealing with ongoing wars that have become a continued lifestyle and normal for many countries. Peace is urgent today, as we face war in Ukraine, a neighbor in pain,” said Kassab, who visited Ukraine earlier this year.

“We cannot face all the injustices today away from coming together in sincere commitment to koinonia, of trusting that as Reformed family, we are called to work together,” she said. “The challenge of involvement of the church in the public sphere, or the empowerment of women in the life of the church, or inviting the marginalized among us to the table, or leading the ecumenical dialogue, are key tasks that the Reformed identity demands from us.”

Also addressing the synod was Alessandra Trotta, moderator of the Waldensian Evangelical Church of Italy. She reviewed the historical support and connections between the two churches, noting, “The past talks to our present.”

Trotta raised several challenges currently facing the church, including welcoming strangers (specifically noting refugees) and the concerns that the church should focus on spirituality rather than social action.

In arguing for “spirituality and human rights, bread and freedom together,” Trotta said, “For us, it is not only a matter of Christian solidarity for people in need but an opportunity of salvation for everybody.”

While in Bern, Kassab also presented the Sylvia Michel Prize to Rebecca Mutumosi Mfutila and spoke on a panel about Christians in the Middle East, focused on the document “We Choose Abundant Life.”