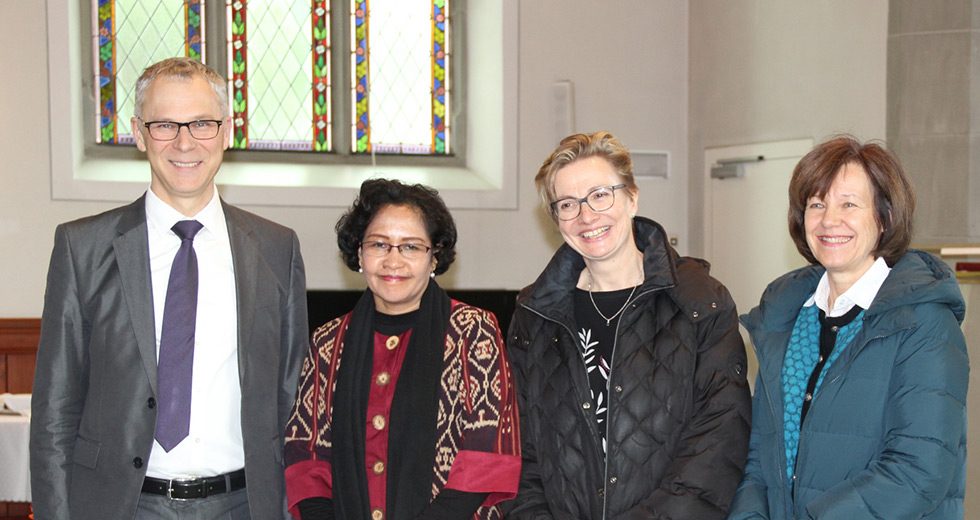 On Sunday, 4 March, the international Sylvia Michel Prize for promoting the leadership functions of women in the church was awarded for the fifth time at a church service in Bremgarten, Switzerland. The award was given to Mery Kolimon, president of the Protestant Evangelical Church in Timor, Indonesia.

Born in 1972, Kolimon studied theology in the Netherlands and completed her studies with a dissertation on the theology of empowerment. Since then, she has been campaigning for victims of human rights violations and fighting against discrimination against women in Indonesia. In 2015, her book Forbidden Memories was published about the fates of women who survived the anti-communist purge of 1965 in East Indonesia.

Since 2015, Kolimon has been president of Indonesia’s second-largest Protestant church, with two million members, Gereja Masehi Injili di Timor (GMIT, Protestant Evangelical Church in Timor). There she has established the network JPIT for women and carries out numerous theological research projects with young theologians. Kolimon is the first woman to be in a leadership position there, although there are many female priests.

Church Council President Christoph Weber-Berg emphasized in his laudation the “impressive courage” with which Kolimon fights against injustice and discrimination and for reconciliation. Models like yours encourage women around the world to take leadership roles in churches, he said. The prize should not only be a material tribute, but “a publicly perceived message of the Swiss churches to their sister churches.”

In her thanksgiving, the laureate said that the prize did not come to her as a person. Nevertheless, she gratefully accepted it for strengthening “the identity of her church” as well as “her own identity as a defender of human rights.” Not only were they honored with it, but “many, many friends and friends who, often at the expense of their lives, fight for justice.”

Kolimon dedicated the prize to the memory of her mother, who, despite their circumstances, was in favour of her receiving a higher education as a woman. Even today, many women in Timor have no chance of education and many are victims of human trafficking. She also dedicated the prize to all women, men and children living in precarious conditions or having to suffer discrimination on account of their sexual identity or orientation.

“This award should inspire them to dream and fight for their rights,” Kolimon said.

Theres Meierhofer-Lauffer, former church council president of the Association of Reformed Churches in the Canton of Obwalden, Switzerland, declared as representative of the “PanKS” the importance of the international Sylvia Michel Prize. Since 2009, it has been awarded to individuals and projects that promote the leadership of women in the church.

Words and image by: Marianne Weymann